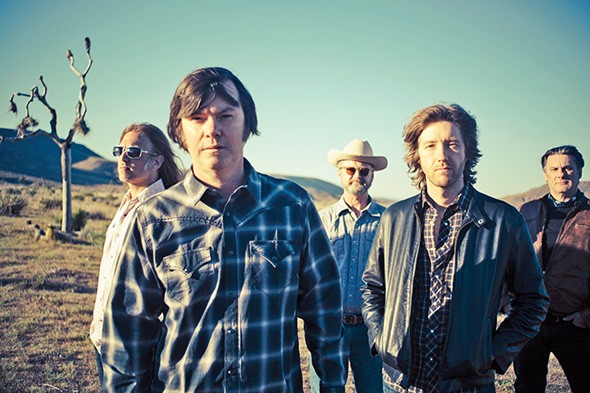 Recorded in part in Tulsa’s Woody Guthrie Center, Son Volt’s latest album, Union, is one of protest music and a tribute to the tradition itself. Though protest songs have seen a resurgence for obvious reasons in the Trump era, Son Volt frontman Jay Farrar said he never really stopped listening to them since his early 20s, when he discovered Guthrie and Bob Dylan.

Son Volt — the band Farrar formed following the 1994 breakup of Uncle Tupelo, the seminal alt-country act that also featured Wilco frontman Jeff Tweedy — plays June 18 at The Jones Assembly, 901 W. Sheridan Ave. Like Guthrie, born in Okemah, who wrote songs about the plight of Depression-era Dust Bowl refugees (“Pastures of Plenty”) and Dylan, who decried racial injustice during the civil rights movement (“The Lonesome Death of Hattie Carroll”), Farrar is also writing in response to the news of the world around him.

“Essentially, it’s protest music, and there’s plenty to protest right now,” Farrar said. “A lot of these songs were just kind of going through the headlines, really … whether it’s ‘The 99,’ where I was referencing some of the protests that have gone over recently, going back a few years. It was kind of a composite sketch of the Dakota Pipeline protests, the Ferguson protests, the Occupy protests. And then ‘The Symbol’ is just referencing what’s going on with immigration and DACA. It’s really just feeling compelled to say something. That’s what I do. I write songs, and it’s been a common part of my upbringing to be inspired by protest music and folk music. It’s just the tradition of the bard.”

“The 99” urges listeners to “Take the stand now, protest and holler / Desecration of the land for the almighty dollar” and promises “They can fill up the jails but it won’t make a dent / Those sins don’t wash away in the sea of discontent.”

“The Symbol,” which closes the album, tells the story of “Juan from Monterrey” who has lived for a decade in the U.S., helping repair New Orleans after Hurricane Katrina. “They say I’m a criminal, that’s what they say,” Farrar sings from Juan’s perspective. “My children were born, born in the USA / They say these children, they too must go / But their home is here, not Mexico.”

Inspiration for “The Symbol” came from Guthrie’s “Deportee (Plane Wreck at Los Gatos)” which details a 1948 plane crash that killed 28 migrant farm workers being deported from California to Mexico. Farrar said he was encouraged to try new creative methods after working with Will Johnson, Anders Parker and Jim James on the 2012 album New Multitudes, which set music to lyrics Guthrie wrote but never turned into completed songs.

“Some experience came from that, for sure,” Farrar said, “maybe some confidence in trying out different types of songwriting. I know that writing from a narrative perspective, from someone else’s viewpoint, I dabble in that on this recording, whether it was the song ‘Reality Winner’ or the song ‘The Symbol,’ just being confident enough to give that a try.”

“Reality Winner” tells of the title subject’s life before and after her arrest and imprisonment for leaking a classified NSA document detailing a Russian cyberattack on a U.S. voting software supplier to the media.

“Obviously, she was a whistleblower, and I found her story compelling,” Farrar said. “I felt the least I could do would be to write a song to let others know who might not know, but fortunately for her, the word is getting out there from a lot of different points.”

On May 29, CNN reported that Winner’s mother Billie Winner-Davis is alleging the government is restricting the media’s access to her daughter in order to silence her.

“The prosecution painted her to be a very evil person, who hates her country ... who needed to be feared by the American people,” Winner-Davis told CNN. “And I honestly believe they are afraid that if America gets to know who Reality Winner really is, they are going to see that wasn’t the case at all. … They are going to see a loving, caring, compassionate person who is honest and who is good.”

In the song named for Winner, Farrar sings of the former Air Force translator and language analyst, “Felt like gaslighting, not something to just accept / Proud to serve, just not this president / Those that seek the truth will find the answers.”

Parts of Union were also recorded at the Mother Jones Museum in Mt. Olive, Illinois. The museum’s website describes Jones, an Irish immigrant born in 1837, as “a fearless fighter for workers’ rights” who “believed in organizing at the community level” and “condemned white supremacists in the union movement.” Farrar compared recording in the museum and the Woody Guthrie Center to a “field trip.”

“The primary intent was to really highlight the contributions of Woody Guthrie and Mother Jones,” Farrar said, “and hopefully learn something along the way and be informed during the recording process, and hopefully, to be inspired, and all those things did happen. … They were both champions of the underdog or the under-represented, so in that sense, they were similar. They’re from different time periods, obviously, and Mother Jones is someone who was intimately involved in trying to get better wages and rights for coal miners near where I’m at here in St. Louis. So it’s something that I’ve always been curious about, the Mother Jones Museum. I remember going back a few decades, even back to the ’90s, it was just sort of a hand-painted sign, almost like folk art on the side of the road saying ‘Mother Jones Monument,’ and just since the ’90s, they were able to get a museum going and a real sign now.”

On “Rebel Girl,” Farrar sings, “Her hands may be hardened from labor / And her dress may not be very fine / But her heart in her body’s beating / That is true to her class and her kind … for the only and thoroughbred lady is the rebel girl.”

“The Reason,” meanwhile, serves as a rallying cry for everyone. “Time and tide wait for no one,” Farrar sings. “Put your shoulder to the wheel …You may fall on stony ground / Hold the line and stay sound.”

Even in times that call for protest songs, Farrar said making music is a therapeutic practice that helps him gain perspective.

“Writing, in general, is a cathartic process,” Farrar said.  “Whether it’s about introspective motivations or inspiration or topical songwriting, it’s all the same. It definitely elevates your mood and takes you to a different place. That’s pretty much what music is all about.”