Brightmusic Chamber Ensemble highlights the work of female composers in its 2019-2020 season. 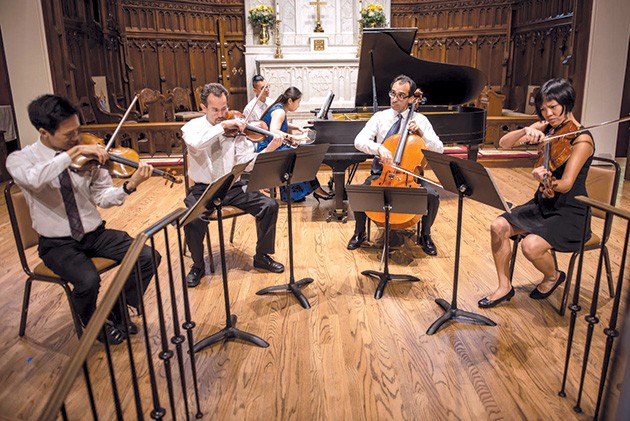 Tailleferre, who changed her name from Taillefesse to spite her father, continued to compose and play until her death in 1983. Her “Piano Trio” is included on the program for Melodic Masters, Brightmusic Chamber Ensemble’s 2019-2020 season opening concert, 7:30 p.m. Sept. 24 at Saint Paul’s Cathedral, 127 NW Seventh St.

Brightmusic co-artistic director and pianist Amy I-Lin Cheng said each concert for the 2019-2020 season includes a work composed by a woman.

“Due to societal reasons — no career path, tradition in previous centuries — there simply aren’t as many women composers that became canonized, and so I think this is a way to make sure that we encourage the listeners and also the performers to become more well informed and to help promote compositions by lesser known composers,” Cheng said. “Brightmusic has always had the tradition, anyway, of featuring works that are lesser known, and so, basically, we are not doing anything that’s outrageously new, but we do want to bring this extra dimension to our programming.”

While women have traditionally been discouraged from seriously pursuing music and the arts in general, some — such as Tailleferre, the only female member of Les Six, a group of influential 20th-century French neoclassical composers — refused to listen.

“In general, it was not deemed an appropriate career for women, but that doesn’t mean women were not involved in music,” Cheng said. “In fact, lots of women studied music, practiced music and had a serious interest in music. They just didn’t make it public or they were discouraged. In the case of Tailleferre, she was actually a bit rebellious.”

“Reading the biographies of Libby Larsen or Joan Tower, they really were trendsetters and, therefore, had great careers, but they also had to fight pretty hard.”
— Amy I-Lin Cheng tweet this

Cheng said Brightmusic’s method of programming concerts by theme rather than historical periods made including women in every concert easier.

“If you look in the 20th century and 21st century, there are plenty of choices,” Cheng said. “I will say that if you are looking for more 19th-century and romantic and classical compositions, it would, in fact, be more difficult.”

In 1983, the year Tailleferre died, Libby Larsen — whose “Barn Dances” for flute, clarinet and piano is included in Brightmusic’s Jan. 21 concert — became the first female composer-in-residence with a major orchestra, Minneapolis Orchestra. Cheng said Larsen’s story exemplifies how far women composers have come since the early 20th century and how long and difficult the battle for equality has been.

“Now in the music world, I think, we’re doing a better job of being aware of biases, and also in schools, definitely, we’re striving to be inclusive of female composers,” Cheng said. “A lot of schools will actually give equal opportunities to all composers to have their pieces performed, so they have venues, and there are more competitions also and grants that composers can apply for to do recordings or to premiere their works, so things are a little better. But I would say by and large, it was very difficult. Reading the biographies of Libby Larsen or Joan Tower [whose “Island Prelude” for oboe and string quartet is included in Brightmusic’s April 14 concert], they really were trendsetters and, therefore, had great careers, but they also had to fight pretty hard.”

“All the compositions that we have chosen for the first concert, they all have really easy to recognize, long, beautiful, melodic lines,” Cheng said. “Listen for the really rich and intricate melodic conversations between instruments. … What we do at Brightmusic is very small ensemble chamber music, in general between two and eight people. … Unlike an orchestra or larger string or wind ensemble, this kind of music making really allows each person to take on an individual part. … You really hear the intimate dialogue between instruments.”

Suk studied under Antonín Dvořák, whose admiration for “Opus 1” inspired its name.

“He had already written other compositions before, but he considered that his first mature piece,” Cheng said. “‘Opus 1’ does not necessarily mean that was the very first piece that he created, but rather he considered it successful because he received a stamp of approval from Dvořák.”

Brahms’ “String Sextet” for two violas, two cellos and two violins was among the first works composed for those instruments without a piano, but its composer’s influence ensured that it would not be the last.

“It’s a work for string players, so as you can imagine, that is going to absolutely showcase the singing ability of the stringed instruments, and that is really what Melodic Masters is referring to,” Cheng said. “When we think of melody, we immediately connect it to singing … so melodically driven work, inevitably, is also vocally inspired. … It’s the number of people, but also, it’s one part per person per instrument that allows that intricate conversation to be heard, and you can definitely hear that in Brahms.”

The works Brightmusic performs are, above all, selected for their quality, Cheng said.

“We choose music because these are outstanding compositions, whether they were by a woman or a man composer,” Cheng said. “There’s an incredible depth and wealth of compositions out there for chamber music. … We stand on the shoulders of the great composers of the past. … We bond through the common language that is music and help each other, male and female, to just promote great compositions and performers.”

In a 1982 interview with biographer Laura Mitgang, Tailleferre said her music transcends gender.

“What difference does it make?” Tailleferre said. “The essential thing is that it be music. I do not see a reason why I shouldn’t write what I feel. If it gives the impression of being feminine, that is fine. I was never tormented by explanations. I tried to do the best I could, but I never asked myself if it was feminine or not. You can say that my music is neither masculine nor feminine. It is just plain music. This is what I try to do: I do what I want.”