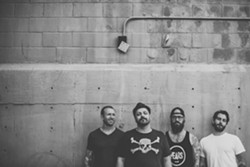 Once again, Oklahoma City punk rock group Red City Radio is back on the road with Less Than Jake.

While on the road, the OKC quartet will find the time to briefly diverge from the main tour and play a homecoming show Oct. 20 at Blue Note Lounge, 2408 N. Robinson Ave. Dale, in a recent interview with Oklahoma Gazette, said the bar and venue is where many of his best friends work and hang out and is like a second home to the band.

Dale loves the place so much that he celebrated his birthday there in May, a party that also doubled as the release show for his debut solo project, the folk rock-flavored Two T’s EP.

Red City Radio has also put out two new singles this year: “Rebels” and “If You Want Blood (Be My Guest).” The band’s last studio album was a self-titled LP released in 2015.

Dale spoke with Gazette while playing video games before the first show on the band’s current tour.

Oklahoma Gazette: So, what’s going on?

OKG: Is Wario your go-to character?

OKG: Red City Radio is back on the road with Less Than Jake. You also have a homecoming show coming up at Blue Note Lounge. Are you excited for that show?

Dale: Of course I am. I love playing the Blue Note in Oklahoma City. It’s not only a place that I frequent every once and awhile, but it is operated by some of my good friends and I’m happy that they have bands play.

OKG: Red City Radio was also a finalist for best local band in the Gazette’s annual Best of OKC reader poll this year.

Dale: Yeah, I was actually at the awards party. I was celebrating wins for the Blue Note and a few other places — my girlfriend works at the Blue Note and she’s also a great tattoo artist at Hard Luck Tattoos on NW 23rd Street. I was at the party, and I was having drinks and there was this big rainstorm, which was super fun. We noticed that the “best public bathroom” award went to OnCue. So I went up there to see if the prize had been claimed. I said I was from OnCue, but they were like, “Yes, the prize has already been claimed.” I said thank you and I walked off, but my plan was to take that home and hang it in my bathroom. So if I could actually get one of those printed off by you, that would be great.

OKG: I wish I had that kind of authority, but I can’t do that. That is a great idea, though. It would be impossible to beat by anyone. You would just have the best bathroom, literally.

Dale: I know. The proof would be right there.

OKG: You also had your solo EP you released recently, Two T’s.

Dale: I did. It came out on my 30th birthday on the Red Scare record label.

OKG: How long had you been wanting to put out a solo record like that?

OKG: Solo music? Or are you also working on some Red City Radio and other stuff?

Dale: I’m always working on something. Let’s just say that the release of the Two T’s EP was the beginning of that part of my career. I’m excited to watch and see what happens. People who know me well — people who are close to me — know that I have a lot of love for a lot of different types of music. It would be a disservice to myself to only play one type of music. On my 30th birthday, I did something for myself, and it was to begin the process of releasing more music. I’m in the process now of recording a few things. I can’t say anything right now, but keep a close eye on Garrett Dale and Red City Radio. Some things are coming out in the future.

OKG: The song that a lot of people talk about on that is “2016 Was Horseshirt.”

Dale: Yeah, it was. Horrible year.

Dale: Every day is new, and every day is different. Some days are good; some days are bad. But as my idol, and a true inspiration to our generation, Homer Simpson said, “I want it all, the terrifying low, the dizzying highs and the creamy middle.” I just take every day as it is, baby.

OKG: Red City Radio has put out a few singles this year, right?

Dale: We have. We put out “If You Want Blood,” which is not a cover of AC/DC’s “If You Want Blood,” and we released a song called “Rebels,” which is not a cover of Tom Petty’s “Rebels.” And I can’t tell you too much because maybe there is something else coming out. But we released a couple of singles exclusively to Spotify — we recorded them on our own, we released them on our own. It’s completely us, and we have more stuff coming.

OKG: Is that the way you prefer to make music, independently putting it out there?

Dale: I’ll say this: I’m for whatever gets music — good music — whether it be our songs or not, to the people. So it is what it is. I just want everyone to hear our songs. As long as you’re listening, I appreciate it.

OKG: You mentioned Tom Petty earlier. Do you have a personal connection to him as an artist? How did you feel after his recent death?

Dale: Tom Petty was great. He was a great songwriter. I wish I would have gone to see him [when he played in Oklahoma City]. Rest in peace.

OKG: It is nice that he played in OKC on what would be his final tour.

Dale: It’s a damn shame — too soon. But, as Anthony Hopkins said in the season finale of Westworld, “Mozart, Beethoven and Chopin, they didn’t die. They simply became music.”

OKG: That’s a good quote. This is your second quote of the interview.