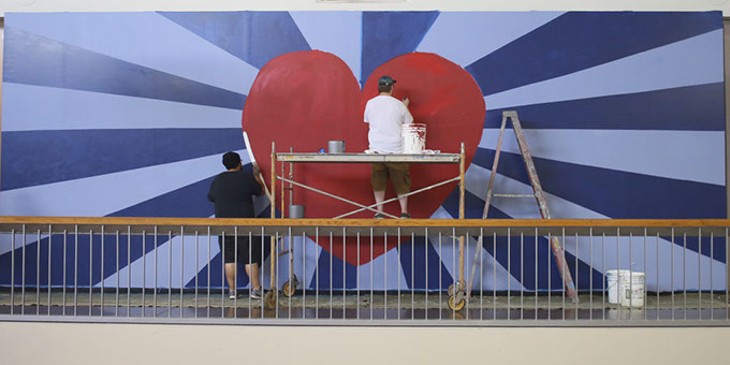 Local artists are cementing our state’s history in inconspicuous places.

Red Dirt Gallery and Studio’s new muralist co-op is revitalizing Oklahoma City’s Plaza Mayor at the Crossroads (formerly Crossroads Mall) one wall at a time. Painting significant subjects from Oklahoma’s past and present, the co-op at Plaza Mayor is making colorful waves in the south OKC community.

“Crossroads is a unique place because it isn’t your typical shopping mall,” he said. “It’s been around for decades. There are quite a few vacant spaces there right now, so I saw that as an opportunity for artistic growth.”

In early 2016, Palmer rounded up a distinct team across the state to join the Red Dirt co-op, intending to revive Crossroads’ blank walls. The collective effort resulted in two large murals by a team of 12.

“Artists love a good deal, and Crossroads has been continuously generous in letting us use about 4,000 square feet of their space for our work,” he said. “Our co-op group ranges from young to old, with varying experiences, careers and skills. ... We’ve all fallen in love with this space in south OKC.”

Among the 12 artists in the co-op, each has a unique presence in the art world. One artist works full time at Lowe’s, one is a retired Edmond elementary school teacher and another works full-time for Southwest Airlines. Their styles and media span from surrealism to silk, and combining their talents makes for an out-of-the-box experience.

“This is a working gallery, so we encourage artists to create new works and build their portfolios each time they use the space,” Palmer said. “Collective murals get artists out of their comfort zones and really innovate.”

Made by a community for a community, the co-op’s murals convey the city’s cultural diversity and historical events through vibrant colors and unique subjects. The co-op’s first project was a bilingual mural that introduces guests to the mall in Spanish and English, with images celebrating the meshing of Hispanic and American cultures.

“We’re using icons and familiar images to show the public the rich culture down here,” he said. “One of the first things I noticed about Crossroads is that there’s not a lot of color on the walls. We want people to see these murals and feel alive.

“People love murals because they are a collective effort; no one person created a specific portion or figure on the wall.”

Downtown OKC’s recent cultural proliferation came with an abundance of emerging artists and contemporary galleries, but in one of the largest U.S. cities by area, Palmer said, it’s easy to overlook Red Dirt Gallery’s southside placement.

“This whole thing started last year because I realized there was an abundance of space available at Crossroads,” he said. “In the ’70s and ’80s, this was the mall to visit. Now, I think a lot of people don’t even know it exists. I call it the mall that’s been forgotten.”

Palmer wants to change that. In addition to group murals, the co-op runs education programs for children, teens and adults, inviting an array of individuals from the community to create art.

“We serve much of the local Hispanic community with our educational programming,” he said. “Because the state is cutting back on art programs in schools, we really want to provide after-school programs that wouldn’t otherwise exist.”

“Art is a universal language,” he said. “Even if our teachers and students can’t understand each other through one language, they can communicate visually. Artists have the ability to communicate by showing rather than telling, and that’s really something special.”

“Crossroads has so many functions. It has classrooms for school groups, space for sports practices, flea markets, different cultural food places, and now our co-op,” he said. “This place truly has potential to enhance so many people’s lives.”