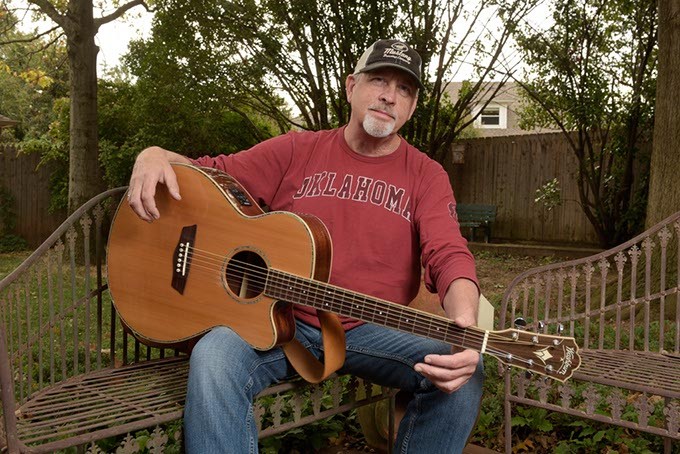 Kent Fauss might have gotten his musical start in outlaw country, but for most of his life, he has been making sure people were on the right side of the law.

The Red Dirt country artist has created music in and out of the state since 1990. Many might recognize him on stage with his guitar at venues like The Jungle in Guthrie, but many more came to know Fauss through decades of work as a legal investigator, often looking into worker’s compensation, fraud and other white-collar civil cases.

“I wasn’t a cop, per se,” he said. “I did do work on some criminal cases, but mostly it was just sort of an investigative and law and order kind of pursuit.”

Fauss began playing guitar at a young age. He played his first professional gig in his late 20s and often covered songs from artists like Jerry Jeff Walker and Buck Owens.

He said he is on the third leg of a music career that has been on and off several times over the years. He has played seriously for the last seven years, a period that also includes a move to Fort Worth, Texas, for a short-lived marriage.

Fauss lived in Texas from 2010 to 2014, the longest time he has spent outside Oklahoma City. He loved being in what felt like the epicenter of Red Dirt music, but it frustrated him to watch his hometown blossom through a cultural renaissance while he was away.

He returned to Oklahoma two years ago after his divorce.

“I was so glad to be back here in Oklahoma City,” he said. “I just embraced it so much, sort of like a prodigal son thing. I’m sort of the prodigal musician.”

Fauss released Guns & Guitars in 2015, an album that draws heavily from his state pride and short stint in Texas. The fun Fauss has playing and writing music is clear in this acoustic project. Printed inside the CD case is a note reading, “No electric guitars were harmed in the recording of this EP.”

He also enjoyed his day job, something he mostly stepped away from in recent years as he focused more on his music. Fauss said he developed a reputation as a leading workers’ comp investigator in the state.

“I had the perfect background for it,” he said. “All my work experience combined, and it just ended up taking off like that.”

Fauss said his work affected his music, but it had less to do with what he did and more with where his job took him.

“The great majority of my work time, I was in rural Oklahoma, every nook and cranny,” he said. “You’d cross over into north-central Texas and the Texas panhandle and southwest Kansas. I identified with those cultures more than most of my suburban existence in Oklahoma City.”

Fauss said he became especially skilled at research and as an interviewer, calming down witnesses and finding ways to relate to them.

A lot of times, witnesses don’t want to talk to investigators. But they often didn’t mind talking to Fauss.

“I think that probably helped a lot with me doing stage work with my music,” he said. “I like connecting with the audience; I like talking to them.”

Print headline: Trail top, Kent Fauss has spent his life splitting time between Red Dirt music and his work as a legal investigator.