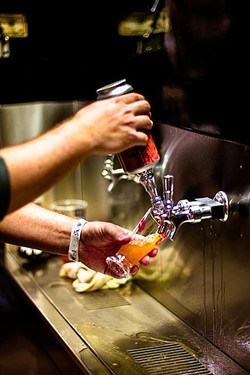 “We have one of the largest beer selections in the state,” Megan Richard said, “primarily because we serve a great community of beer lovers, and it seemed all the festivals were in Oklahoma City and Tulsa, so we decided to start our own.”

Many of those fans also are active-duty military who are stationed at Fort Sill in Lawton. Proceeds from the event will benefit thousands of young soldiers and their families.

“We served nearly 13,000 soldiers and their families in 2014,” Vaughan said. “The proceeds from the Red River festival help with a variety of services.”

Armed Services YMCA focuses on junior enlisted soldiers, typically those 18-24 years old. Many of them — up to 75 percent, according to Vaughan — are married with children when they join the military.

“They make enough to live on but not enough to have fun on, as a rule,” Vaughan said. “We provide services through partner organizations like the [First] Command Financial Advisors so that the soldiers and their families have access to financial planning and budgeting to help.”

In addition to advisory assistance, proceeds help with direct care via morale, welfare and recreation programs; chaplaincy; and even food and clothing.

“When there is more month than money, we have a food bank and direct financial assistance to help with rent, utilities, bills and a whole host of other issues,” Vaughan said.

Richard explained that sponsors or donors met most of the festival’s costs so more money could go to help soldiers and their families.

Organizers expect 60-75 varieties to be available to the public, including a special pouring of Founders Brewing Co.’s Breakfast Stout, another of the world’s top-rated beers. 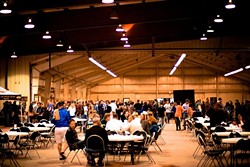 Tickets are available at three different levels, including a $10 designated driver ticket, which includes event entry and access to entertainment, food trucks and nonalcoholic beverages.

VIP tickets are $55 and include a tasting of Belgium’s Girardin Gueuze, one of the highest-rated suds in the world.

General admission ticketholders also will have access to Girardin if supplies are still available after the VIP event.

print headline: It’s crafty, A beer festival showcases over 60 varieties of state and regional beers as it raises money for Armed Services YMCA in Lawton.

Note: Tickets must be purchased online.