A local soil company specializes in producing the perfect soil in which to grow medical marijuana.

If you need the dirt on growing cannabis in organic soil, Redbud Soil Company is the place to get it.

Co-owners Chris Brady and John Martin have known each other since eighth grade, and it’s apparent by the way they can finish each other’s thoughts.

“When [State Question] 788 passed, I called Chris about maybe consulting me doing a grow, and Chris decided to inform me that that wasn’t a good idea for me to do,” Martin said.

“That was a real nice way of putting it,” Brady said.

“Then a couple days later, he called me and goes, ‘You know what? I do have an idea though,’” Martin said.

“I’ve been growing for 10 years, and when I started growing, I learned real quickly that I didn’t like what was on the shelves, so I always made my own stuff and that’s where the soil came from,” Brady said. “When I started to grow, I lived in Arkansas, in Eureka Springs. ... Super-soil was still a thing. People still use that term today, unfortunately. That was what we kind of started with. And then it turned into recycled organic living soil a few years later. And so, you know, I started making my own soil and throwing it away, and then that didn’t last very long because I realized it was such a waste, so I will recycle it into my outdoor vegetable garden and things like that. And then we got to the point probably a year into it, a year and a half into it, of being able to recycle it and keep it for years, and so then that morphed into turn it into no-till. And no-till is, instead of having to recycle it, you put worms in there, you have bugs in it, you put it in the pot, you don’t touch it for years, so it was definitely a multi-year process to get to where we are now.”

“You’re not going to buy a soil from another store that is this high quality and that is this alive,” Brady said. “It’s impossible. This would be the Cadillac/Lexus of soils. The good thing is, I only sell it to you one time. You buy it one time and you keep it in the pots for five to eight years.”

“Unlike FoxFarm and all those other things, you buy that and maybe try to recycle it yourself or you throw it away, you can keep this for five years,” Brady said. “No more soil you have to get ever. Just cover crops and amendments between cycles. There’s worms in there; they eat everything. Just curate some specific insects and that’s it.”

A “cover crop” like clover helps aerate the soil, he said, which prevents compaction issues that lead to things like root death in cannabis plants.

“The cover crops help shoot roots down and keep the soil open and breathing,” he said. “If we’re doing any kind of trimming or defoliation or anything like that, we’re going to throw it on the top and just let the worms eat it and turn it into nutrients again. Nothing gets wasted. We try to mimic outside as much as we can inside, because you know, in the fall, what happens? Leaves fall. It goes back into the earth and we do it all again. We’re just doing that every three months.”

Worms will not need to be added again.

“They’ll totally survive. ... They will self-regulate how many can be in that pot,” Brady said.

Once the soil is ready to go, it only requires a quart of water three times a week.

“The water-holding increases as the soil ages,” Brady said. “Zero to six months, it’s going to be okay. Six to 12 months, it starts getting pretty good. After 12 months, you can water next to nothing. If you have water that runs out of this pot, you’re watering too much. If you get one drop on the ground, you over-watered. The whole point is to conserve, and this just turns into this living mass.” 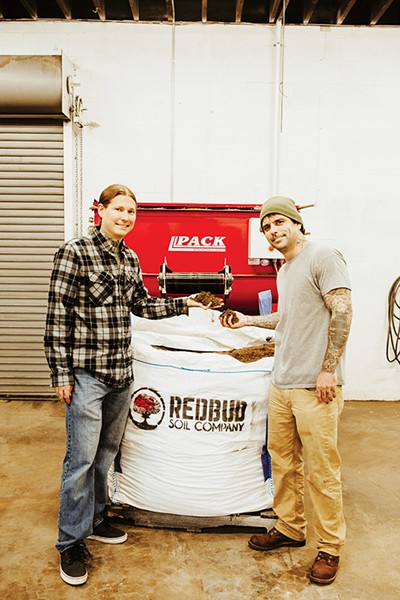 Along the way, there are “soil amendments” that need to be added. Keeping in line with Redbud’s mission, it makes some of them from the waste of nearby local businesses. Its lactic acid bacterial serum is made from old milk from Urban Agrarian in the Farmers Market District, while its bokashi — a Japanese term that means “fermented organic matter” — is made from spent grains from Stonecloud Brewing Co. right up the street.

“I’d like to just get people onto organics using no chemicals,” Brady said. “There’s no chemicals in our store anywhere. Everything’s 100 percent natural. We just want to have people grow the highest-quality, high-terpene, organic cannabis possible and not screw up a lot of stuff, help them get ahead of the curve.”

While it all seems relatively simple, there is more that goes into a successful cannabis grow. If you need help, Redbud charges for consulting a commercial growing operation but will help customers with simple advice for their home grows for free.

“To be realistic, I’ve fucked up enough shit that if you pay me for two hours, I can line you out so good,” Brady said.

“It doesn’t cost you as much as losing your entire crop,” Martin said.

While winter has technically just started, spring isn’t far away and patients who are planning to grow in enclosed outdoor spaces at home will need to get started soon. Redbud also sells packages of seeds for $30 and will be selling clones soon.

“If you’re going to do outdoor, you’ve got to start planning in about a month and a half,” Brady said. “You’d probably already need to get your cloning going and get everything prepped for outdoor right now and get your soil ordered. We make it all here by hand.”