Revenge is a dish best served at the edge of a cold steel razor blade in Reduxion Theatre’s production of Sweeney Todd: The Demon Barber of Fleet Street. 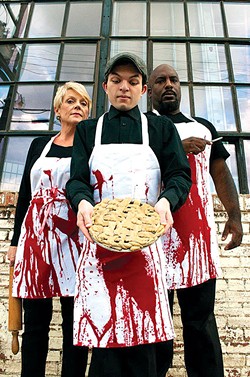 Revenge is a dish best served at the edge of a cold steel razor blade in Reduxion Theatre’s production of Sweeney Todd: The Demon Barber of Fleet Street, now playing at its Automobile Alley theater.

Based on the 1973 play by Christopher Bond, the Tony and Olivier Award-winning macabre musical theater classic written by Stephen Sondheim and Hugh Wheeler debuted in 1979 and left an indelibly bloody mark on modern musical theater.

Set in 19th-century England, Sweeney tells the story of Benjamin Barker, who returns to London under the assumed name of Sweeney Todd after serving a 15-year prison sentence for crimes he didn’t commit. Aided by his accomplice, Mrs. Lovett, Todd concocts a ghoulish plan of revenge against the judge who banished him.

“Sweeney is the embodiment of what is appealing in Victorian horror: It’s bloody, its hero is dark and yet there is a surprising amount of comedy,” said Reduxion Managing Director Erin Woods.

As unlikely as it seems, the tale of Sweeney Todd was inspired by a real news report of a barber murdering his wife’s lover in the barber’s own chair.

The story appeared in London’s The Annual Register in 1785.

Fifty-nine years later, the penny dreadful story The String of Pearls dramatized the murder, giving the barber the name Sweeney Todd, an address on Fleet Street and an accomplice by the name of Mrs. Lovett.

“There’s something dark about this period in the 1800s that got channeled through the art of the time,” Woods said.

In France, you had the graphic horror theater of Grand Guignol, while in England, there were sensational tales of murder and horror in penny dreadful magazines.

It happened again in the 1970s, with the play and musical versions of Sweeney capturing the cultural zeitgeist of that time with the rise of shock-rockers like Alice Cooper, who revived some of Grand Guignol theatricality, and the increasing popularity of horror films like The Exorcist.

Because Sweeney is so tied to the time and place in which it’s set, Reduxion opted to keep the piece in period. Creating that world on stage proved to be one of the bigger challenges of the production. Woods said that set designer Jason Foreman couldn’t rely on the kind of large two-story sets typical of this show in order to create an immersive environment. Instead, he had to reproduce the effect in Reduxion’s intimate space, utilizing every inch of the venue so you are immediately transported upon entry.

With their color-blind casting of Jerome Stevenson as Sweeney, Reduxion bucks a decades-old trend of only casting Caucasian actors for the lead role.

“We didn’t even think about it, to be honest,” Woods said. “It was simply a matter of Jerome being the best actor for the part.”

In addition to his acting and directing work, Stevenson also serves as the artistic director at The Pollard Theatre in Guthrie. Working out the scheduling between those competing duties took some effort, but Stevenson said he couldn’t pass up an opportunity like this, not knowing when or if it might arise again.

“I really wanted to add my name to the list of actors that have tackled this part and deliver a performance to the audience that’s memorable,” he said.

Woods said that both Stevenson and his costar Elin Bhaird, who plays Mrs. Lovett, are extraordinarily compelling and charismatic in their respective roles.

While Todd and Lovett might commit heinous acts, Stevenson said that as an actor, you never see your character as a bad person.

“The tragedy is seeing the intense love that this wronged man has for his family, distorted by pain and loss into an all-consuming quest for revenge,” he said. “The audience gets to see how, at each crossroads, he could make the right choice but doesn’t.”

Director Matthew Sipress said that because we empathize so strongly with Sweeney and Lovett, taking that journey with them might have you questioning your own moral compass.

While the story has endured on its own for centuries, Woods and Stevenson agree that the enduring popularity of the musical version of Sweeney is owed largely to Sondheim’s score.

“It’s brilliant in the way that it emphasizes the thematic ideas and creates a sense of horror, all while moving the audience through Sweeney’s complex emotional journey,” Stevenson said.

Sweeney Todd includes scenes of graphic violence and is not recommended for children under 12 years old.

Print headline: Sweet revenge, Reduxion Theatre Company snips at our moral compass with its adaptation of a centuries-old tale.