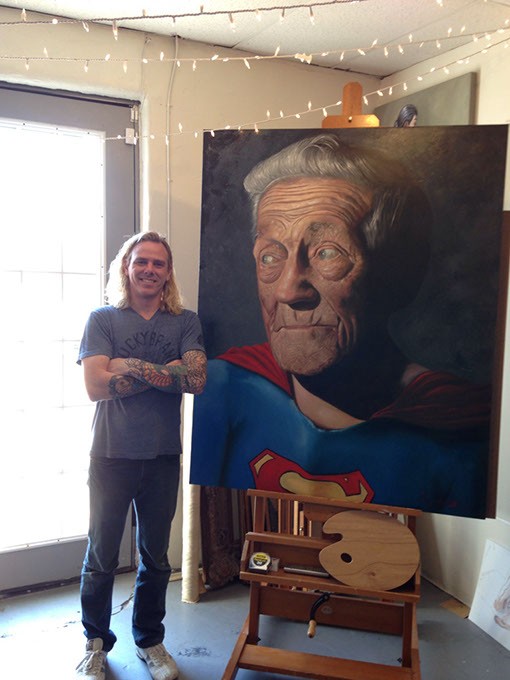 Artists are usually the product of someone else’s teachings. Pablo Picasso was the son of an artist. Leonardo de Vinci apprenticed under Andrea del Verrocchio. Michelangelo studied with Francesco da Urbino.

Williams said he had no direct guidance other than the inspiration of others’ work and himself when developing his artistic abilities. He is described as a master of emotive realism for his ability to capture his subjects’ feelings within his paintings.

Raised in the Edmond area, Williams discovered his love for art at age 7 after drawing the head of a leopard. His family’s response to the sketch encouraged Williams to develop his talent.

After high school, Williams said, he wanted to see the world and set out to London, where he earned a degree in architectural design. He said the rich art culture of European countries greatly affected him. He regularly visited the local museums and said artists John Singer Sargent and Edgar Degas are two of his greatest influences.

After living abroad for a few years, Williams returned to the United States and moved to Florida. There, he realized he wanted to pursue the life of a painter. He worked as a muralist for 18 years before deciding to pursue a fine arts career.

“I was able to do more of what I wanted [with fine art],” Williams said. “The murals were more landscapes, buildings and things. I wanted to focus more on portraits, and I wanted to be known for my fine art instead of just as a muralist.”

He refuses to sell reproductions, or prints, of his pieces. Therefore, each of his commissioners receives a unique work that is truly unlike any other.

His work also garnered the top award at this year’s Paseo Arts District Festival, earning Best in Show. He has entered pieces in competitions as far away as Brussels, Belgium, as well.

This month, he relocates his studio, Hüe Fine Art Gallery, to 1 N. Broadway in Edmond. He said the location offers more for him than his address off Western Avenue.

Williams said his ultimate goal is to paint a portrait of a sitting president. He believes there would be no greater achievement, especially for an American artist.

Williams did say that if he were able to go back in time, he would prefer to paint Abraham Lincoln rather than any other president. He said he is a fan of Lincoln’s dominant demeanor and believes the emotions Lincoln often showed in his face would translate perfectly with his realistic emotion style of painting because of the details he would be able to focus on.

Williams’ work has even been used to try to help solve mysteries. In April, he created a rendering of a woman the Oklahoma County Sheriff’s Office was trying to identify. Officers provided him with pictures of the woman’s body and had him paint how the woman would look were she alive. He said he went to high school with one of the detectives on the case, who contacted him because the OSBI forensic artists who would usually help with investigations like this one were backed up.

“In the photos, the body was in rigor mortis,” he said. “What I had to do was take my knowledge of bone and facial structures and reconstruct that. I almost had to wing it. The body was identified within 30 minutes of [the forensic artwork] being shown on air.”