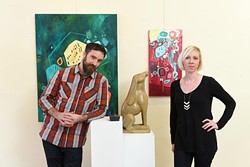 What makes an object valuable?

A lock of hair can be auctioned for millions if it belonged to the right celebrity. A clay rice bowl morphs into a priceless artifact if it stays buried long enough. A canteen is worth more than a diamond if you’re lost in the desert.

Tim’s “relics” — stone sculptures of cassette tapes, an Atari joystick and a rotary phone — are more than hipster throwbacks or quaint reminders of days gone by. They’re artifacts from his past.

“All of those things were originally made of plastic,” Tim said. “They were common and not super valuable, but they were extremely valuable to me as a child.

What’s here are tangible memories: the first gaming system that meant everything to a young boy; the tapes his sister loaned him when he went upstairs, lit a candle and listened to Dark Side of the Moon; the hand-me-down phone from his bedroom and all those nights he stayed up late, hid in a corner and talked to girls.

“They may have been made of cheap plastic, but they carried so much meaning for me,” Tim explained. “I thought it would be interesting to juxtapose the permanence of a stone sculpture with the fleeting existence of those objects that have fallen out of favor.” 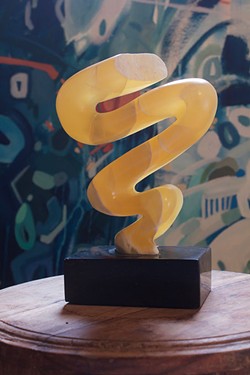 In addition to his relics, Tim also displays several of his abstract pieces, work he described as “all about the curves.”

Simple and elegant, with strong, clean lines, Tim’s figures represent the latest in a progression that has led him through different genres, themes and materials.

A ceramicist in high school, Tim eventually graduated to clay and then stone. Working with exotic stones from all over the world hooked him, though.

“I really think the Zen aspect of polishing and sanding these rocks is one thing I love about it,” said Tim, who has been working with stone for two years. “It’s been a real process, learning how it works, but I’m making things that I’m really proud of.”

His pieces complement Erin’s new work. She said she’s also growing as an artist, and this is the first show in which she blends figurative imagery into her breezy abstracts.

“I’ve been working for four months on a really large painting that’s a combination of abstract and figurative,” Erin said. “I’ve only recently started working on figures, and I wanted to figure out a way to bring that into what I wanted to say, to make some work that was more personal.”

In an effort to do just that, she painted several portraits of OKC that she knows and admires, combining her new phase with her trademark abstracts. 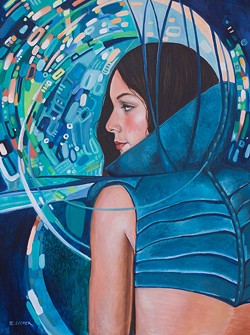 “All of the abstracts are inspired by armor, branches, leaves,” Erin said of her new works. “It’s unlike anything I’ve ever done. It’s a little bit weird, but it’s very much what I’m interested in right now.”