The Pet Food Pantry of Oklahoma City nonprofit is dedicated to helping seniors on fixed incomes and others in need with pet food and supplies. Since 2010, the charity has done its best to ensure people don’t have to share meals with their pets.

It relies heavily on donations, and for Judy Smith, the charity’s vice president, there is no better fundraiser than Remington Bark at Remington Park Racing & Casino.

“We have a lot of supporters and fundraisers, but Remington Bark is the one we look forward to every year,” Smith said. “There is nothing else like it.”

The event set up a board to select rescue shelters to support, including Tornado Alley Bulldog rescue and six others.

“One of the difficult things about Remington Bark is the fact there are so many rescues in Oklahoma City and across the state,” said event coordinator Alexis Zeigler. “We’re helping everyone we can.” 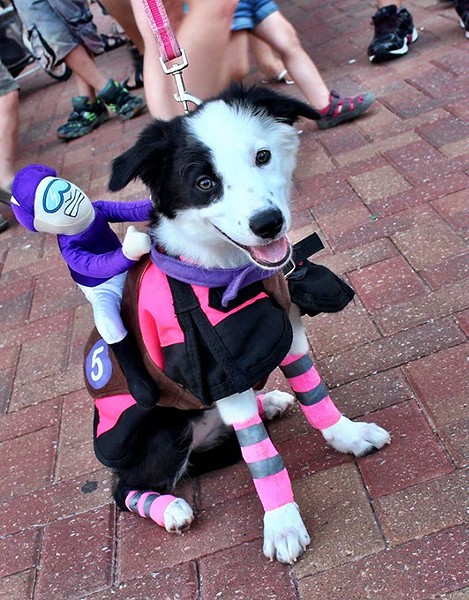 For $25, pet owners can register their dog into one of three size classes to race in between thoroughbred races. Dogs will get in position in a miniature version of the starting gate used for horses and race from one owner to another. Bets will be taken, with the winner receiving a cash prize.

Zeigler said the race winner and winner of the dog costume contest usually donate their winnings to the pet rescues.

“Live pet racing isn’t done anywhere else in the state,” Zeigler said. “The first year we did the race, the dogs came out of the gates and went everywhere else they were supposed to go, except straight. It was kind of perfect.”

Admission to the event is free and open to all dogs beginning at 6 p.m. The only requirement is that they stay on a leash. The first 100 dogs to arrive will receive a “wag bag” of dog treats. Dogs in costume will have a high bar to clear from last year’s winner, Doggy Parton.

“The owner ordered the costume off of Etsy, so it was totally custom,” Zeigler said. “It had the wig, hair and even fake boobs. The dog and the owner were so excited when they won.”

Smith said that the casino has arranged for casino chips to be given to attendees who donate dog food to The Pet Food Pantry.

“We just want to let people know that we’re here,” Smith said. “Remington Bark has gotten bigger every year, and people are getting oh so anxious.”

In addition, dogs will have ample access to cooling and drink stations while owners peruse silent auction items, food and drink from over 30 vendors.

“Every place that I asked to donate items for the raffle jumped to participate,” Zeigler said. “Everyone around the community is so helpful and willing to be there for the animals.”