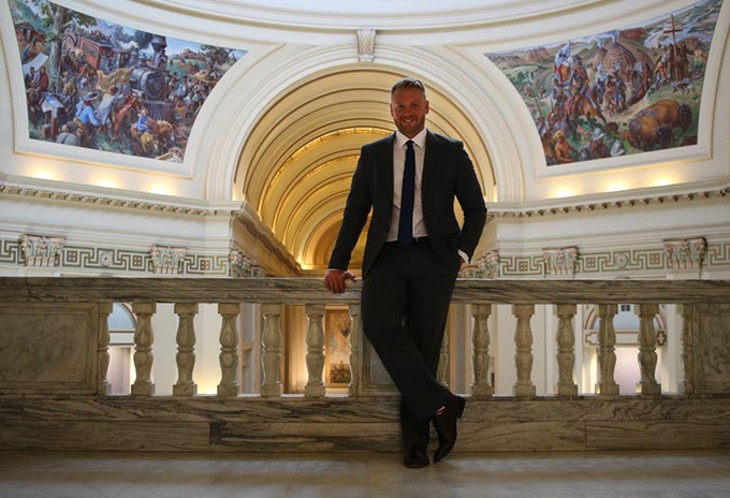 Three years ago and before starting a career in politics, Rep. Mickey Dollens, D-Oklahoma City, was a roughneck on a drilling rig using equipment dating back to the 1970s. Following a rapid decline in oil prices and drilling activity, Dollens and other members of his crew were laid off. He rebounded with an offer from another driller, but many of his colleagues went from boom time salaries with benefits to minimum-wage service industry positions.

When Dollens stepped on the drill floor of his new employer, he was taken aback by the automation, as machines had replaced many of the tasks of laborers.

“I went from a five-man crew to a two-man crew with most of the work done by a driller in an air-conditioned room with monitors and joy sticks,” Dollens told Oklahoma Gazette. “That was my first taste of automation, my first experience with job displacement.”

Dollens later left the oil and gas industry, falling back on his college degree and earning a position as a teacher at OKC’s U.S. Grant High School. In 2016, when southwest OKC voters elected him as their representative for House District 93, the Democrat arrived eager to work on policies that addressed education and employment.

He kept his word, filing legislation to create construction trade elective courses for high schools students, even as young a freshman in his first session. The legislation offered students a career-based course preparing them for good-paying jobs in the construction industry once they graduated or left high school. While the legislation passed the House, it failed to gain a Senate committee hearing.

“I welcome automation to Oklahoma,” Dollens said. “By getting our apprenticeship program up and running, we will become a national example. We will attract more industries to Oklahoma. This is a big part of future job growth in our state.”

Two years ago, the Obama administration began investing millions into a federal apprenticeship office in hopes of expanding career pathways to the middle class. More recently, President Donald Trump signed an executive order to expand apprenticeships by cutting back the federal government’s role in creating and monitoring apprenticeship programs, which the president touted as a way to fill vacant jobs.

Gov. Mary Fallin was one of seven governors at the White House for the president’s executive order signing. The two-term Republican governor is a supporter of apprenticeship programs and their expansion in Oklahoma.

Dollens sees this as the perfect time to review and revise Oklahoma’s career and technical education programs and establish an apprenticeship program through the Oklahoma Department of Career and Technology Education, Oklahoma State Regents for High Education and Oklahoma’s industry leaders.

“We are working as if it will happen. We will be prepared and be ready,” Dollens said of the federal legislation.

In addition to meeting with industry leaders and fellow lawmakers, he is drafting legislation for the upcoming legislative session; however, he admits it could take several sessions to pass such measures.

To meet the high demands of local industries and deal with the threats of automation, Dollens wants to modernize curriculum, training students for careers in coding, information systems, machinery, graphic design, health care and more.

Among other reform efforts, he advocates for revising admission standards for CareerTech programs. He wants access to all students, not just those with B averages or higher.

So far, Dollens said his office has received positive feedback from constituents and from lawmakers, including those from across the aisle. He said one obstacle he faces is public perception. For years, there has been a perception that a four-year degree was key to achieving a meaningful, well-paying career. He argued there are multiple pathways to such careers. Developing an apprenticeship program is the best way to connect Oklahomans with those careers.