Replica of Leaning Tower of Pisa on display at OU 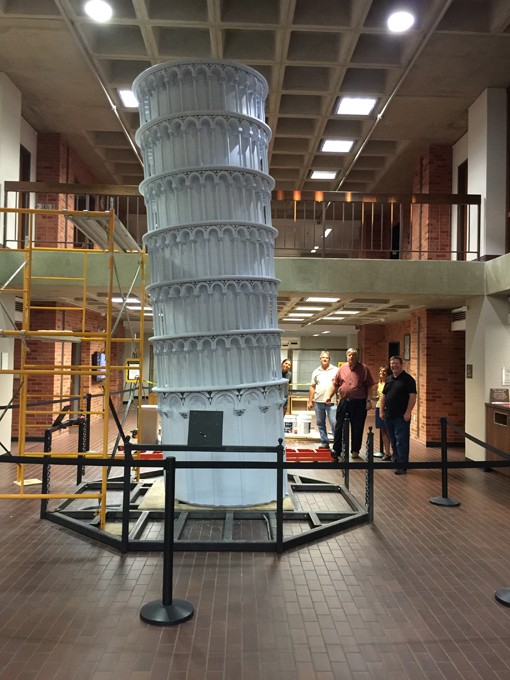 Taking 1,500 hours of work and about a year’s time to complete, the 18-foot-tall, 1/10th replica of the Leaning Tower of Pisa found in the University of Oklahoma’s (OU) Bizzell Memorial Library is a definite eye-catcher.

The structure, a long tube of construction-grade Styrofoam with steel interior framing, introduces students to the work of Galileo Galilei, who famously used the Italian bell tower to demonstrate gravity’s effect on objects with different masses.

The scale model also is a winner on social media.

“As you can guess, there is no shortage of people who like having their photo taken ‘holding up’ the tower,” said Theresa Marks, an assistant dean in OU’s College of Engineering.

Marks was a key organizer in the project, which is one piece of Galileo’s World exhibits and programs offered as part of the school’s 125th anniversary.

Chelsea Julian, project coordinator for Galileo’s World, said it includes about 20 exhibits across all three of OU’s state campuses.

The university’s Bizzell Memorial Library is home to one of the best collections of historic science texts, including a complete first-edition set of Galileo’s works.

Julian said several different entities within the university were called upon to help illustrate Galileo’s significance.

“When they started approaching departments to look into these connections, we got more and more interest to the point where it evolved into the giant endeavor that it is now,” she said.

Firsthand observations of the famous tower were used in the model. A group of 19 engineering students studying abroad in Italy last summer took a side trip to Pisa to gather color swatches and measure the exact lean of the structure: 3.99 degrees. OU’s replica has a 5.5 degree lean, which was how far the original tilted before it was straightened to keep the 14,500-ton landmark upright (a project started in 1992 and completed in 2001).

“Sounds easy, but there were many details in every phase that had to be studied and planned for during the fabrication,” Marks said.

The structure also includes a ball-dropping mechanism used to replicate an experiment attributed to Galileo, in which he dropped balls of differing weights from the tower to show that their fall times were independent of their mass.

A primary team of five faculty and staff members, 15 students and additional volunteers worked on the project, which will be on display for at least 18 months. A variety of typical challenges, such as machinery not always working and ideas not always coming out as hoped, arose during the construction phase. Marks explained that this one-of-a-kind project has no template to follow other than the original tower itself.

“Fortunately, we had an amazing crew, great student interest, amazing colleagues and support for the overall exhibit,” she said.

Marks said she has never been involved in a project quite like this one, but she is excited to see art and science come together in this ambitious project.

“Aside from this project, the synergy, creativity and discovery that such integration inspires has undeniably shaped and continues to shape our world,” she said.

Print headline: Crooked fingers, Art and science collide to create an Oklahoma-based version of the Leaning Tower of Pisa.