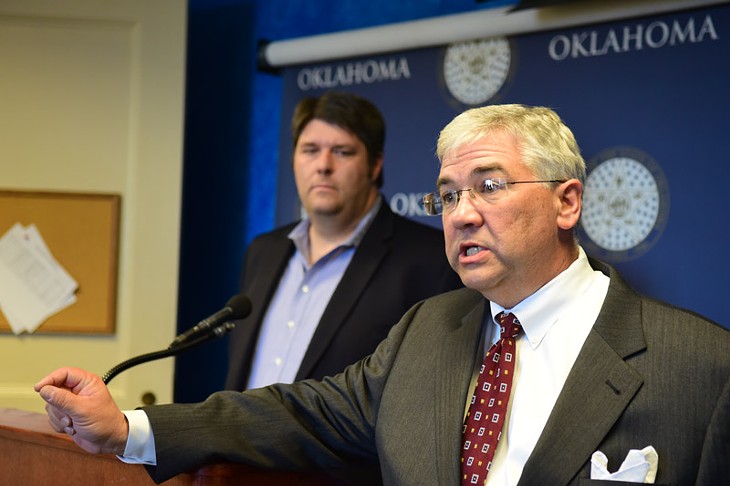 Pew Research’s Hispanic Trends Project estimates 75,000 undocumented residents lived in Oklahoma in 2010, a dramatic increase from 15,000 two decades ago. That number has likely grown over the past few years, and a Republican state lawmaker is urging the federal government to take action on immigration reform.

“Don’t hold anyone back who wanted something better for his family and the only way he could do it was to come here illegally,” said Sen. Brian Crain, a Republican from Tulsa. “Don’t hold that against him. Make him start at the back of the line but give him a line where he could become a citizen.”

Crain spoke at a press conference Wednesday calling for Oklahoma’s federal delegation to work towards immigration reform that provides a better process for citizenship and allows many undocumented citizens to gain access to work.

Crain was the only state legislator to speak at the press conference, but was joined by Pat McFerron of CMA Strategies and Jake Fisher, owner of Bridges Advertising, both Republicans. Many Republican leaders across the nation and other business owners from OKC spoke out in favor of reform.

Immigration reform has been a divisive issue for many years and could become a political stalemate in the coming months as President Barack Obama has indicated he will use executive action to avoid deporting millions of undocumented citizens.

Republican leadership in the House and the newly elected Senate have said such action by Obama could hurt the chance of any meaningful immigration reform in the coming year. Leaders from Oklahoma have also criticized Obama’s potential use of executive action.

“Executive amnesty is not the answer,” Sen. Jim Inhofe wrote on his Facebook page Wednesday. “It’s being reported that if President Obama goes around Congress and uses executive action to enact his? immigration reform, roughly 5 million illegal immigrants would get amnesty, receive work authorization, social security numbers, and government issued IDs. This is not going to make our borders more secure, but instead only entice others to avert our nation’s immigration laws.”

Wednesday’s event was targeted towards federal lawmakers and Crain said he did not view immigration as an issue where states had much control. Oklahoma House Bill 1804, which was passed in 2007, was viewed at the time as one of the nation’s most anti-immigration laws and Crain, who voted for it then, said he would do so again.

The Oklahoma Policy Institute has reported that the law cost the state millions in economic growth as some immigrants fled the state and that Oklahoma would lose close to $600 million if every undocumented citizen were deported.

The economic impact of immigration was championed as a reason by Crain to work for reform as many immigration experts say the nation is struggling to fill some jobs because of a broken immigration system.

“During the recession there were actually job vacancies at many companies but our visa quotas were already filled,” said Akash Patel, founder of Aspiring Americans Initiative. “Right now we have an immigration system that isn’t tied to the economy and it should be.”

Patel said he was aware of efforts in the Republican party to take a softer stance on immigration and believed the nation was moving towards reform.

“But I think we are moving very very slowly,” Patel said.