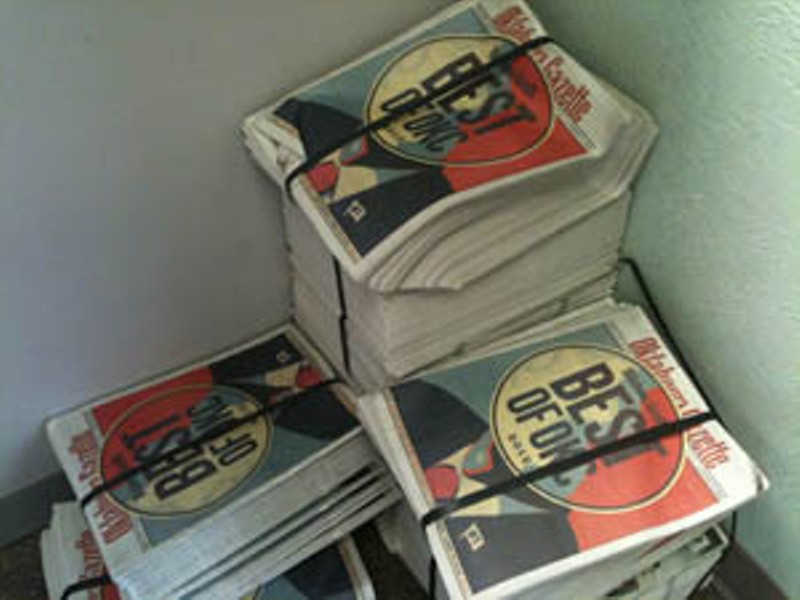 See, shockingly, we didn’t have quite enough lists last week, despite running the gamut from Best Waiter or Waitress to Best Free Wi-Fi, so for the fourth year in a row, we’ve assembled some extras — the Rest of the Best of OKC, if you will. And you will.

Once more, we not-so-proudly present a handful of additional lists, in an attempt to satiate your need to have everything numbered in a nice, orderly fashion, but not limited to five slots.

As always, parental guidance is suggested.

2. Best Bartender: “You expect your average OKC citizen to know who any of these people are? Terrible categories!”

4. Best DJ: “Seriously...Best DJ? Like I know the asshat who picks the music. Well, Johnny Tsunami has the name that most sounds like a cartoon, so he gets my vote.”

6. Best European Restaurant: “Got food a friend and I both got food poisoning from [REDACTED], my first time there. We had corden bleu.”

8. Best Local Politician: “I picked someone random because all politicians have no soul and are worthless pieces of dog feces.”

9. Best Lunch: “how can you beat an orgasm in your mouth. [REDACTED] for the win.”

11. Best Place to Buy Sports Equipment: “The rest are d-bags”

12. Best Restaurant Downtown: “I loathe [REDACTED] with a passion greater than my ability to adequately articulate it.”

13. Best Restaurant Outside the Metro: “Fork? Plate? Boulevard Wheat? You must be from Edmond.”

14. Best Sign That OKC Still Has a Long Way to Go: “Who the fuck keeps voting for this wretched woman?”

15. Best Sign That OKC Still Has a Long Way to Go: “Be afraid of super powered gay terrorist.”

BEST ANACHRONISM: The Three Musketeers, The Stage Door in Yukon

1. “You need a category for best local band not called The Flaming Lips.”

3. “Can we just retire the Flaming Lips from this category?”

4. “Wayne posts a bunch of annoying crap in between the few golden nuggets about where to find Carlos, unless you like videos of him peeing somewhere.”

5. “Normally you have to pay for that kind of thing.”

1. “Since the pharmaceutical industry has developed sexual enhancement drugs, our men grow old and sick with sexually transmitted diseases. When men are older and have less hormones driving them crazy, they have more time to think, so they should be thinking with their brains, not their penises. Down with penis worship!”

2. “I am wondering if you would have any interest in publishing a serial story in your paper, as in times long ago. I am a great creative writer! My goal is to be paid for my talents. Excerpt: Chapter One ‘Miss Terri, did you hear about the bones?’ Of course I did not  hear about them. ... However, I knew about the bones and had no doubt as to precisely which bones had been at last discovered. ... Her car was yellow, like a bell pepper, not mustard. The car smelled like almonds.”

3. “Actor Ben Affleck is a benefit to mankind.”

4. “I write Christian in sorta of a poem fashion. I live in a nursing home. If there was some way to get them published and get some small royal off of — I could use it. Don’t cross me cause I am done won’t sue but no more — yes I am plain spoken. God is my Boss not man!! How do I sound?”

5. “In 2011 there were only six (6) Black elected officials and church leaders in the whole State of Oklahoma that possess any self worth, any dignity that they will not kneel down and suck the asses of white folks.”

6. “A neighbor at the motel offered me money to lift up my shirt. Sorry to disappoint you, but I accepted his money and lifted my shirt.”

7. “I have included a copy of my novel. Simply put, this book is the ‘drama of the year’ with the best ending of any book or movie the last 10 years. It’s unforgettable. There will be 25 ‘high quality books’ published over the next 12-15 years from my master list of 160 book ideas.”

1. It has action, humor, romance, and one of the bad guys is a plus-sized Belizean drug lord named Baby Jesus.

2. I grew up in Oklahoma City and live here now. Support the hometown team!

3. Starred reviews from both Booklist and Publishers Weekly, with flattering comparisons to Elmore Leonard.

4. If you don’t, I will make you a character in my next novel and give you an unflattering paunch.

5. I guarantee it will make you happier, wealthier and less paunchy, or your money back (some restrictions apply).

GUEST LIST: Brian Davis’ 5 Best Lines He Hasn’t Used Yet as Play-by-Play Announcer for the Thunder

2. “[Insert player name] racing down the floor like his head’s on fire and his tail’s catching!”

3. “I don’t think the Rhodes Scholarship committee would lose any sleep over this guy.”

5. “Anybody know the Heimlich Maneuver? He swallowed the whistle so hard there, I think he might be choking.”

1. Just what the heck is in that casserole? Sen. Ralph Shortey, R-Oklahoma City, drew national headlines (and punch lines) when he sought a ban on food that contains aborted human fetuses. Alas, Senate Bill 1418 stalled, meaning those school cafeteria “mystery meat” lunches remain as perilous as ever.

2. Evolution and climate change may rival homosexuality when it comes to the ire of Rep. Sally Kern, R-Oklahoma City. Her House Bill 1551 would have encouraged teachers to poke holes into such “controversial” science-based gibberish. In true Darwinian fashion, the bill ended up being devoured by reason.

3. Not one to be discouraged, Kern also introduced legislation to prohibit state courts from basing decisions on foreign laws, including religious law. Faster than you could say “Sharia law” — much less “alarmist” — HB 1552 failed in a Senate vote.

4. In a move certain to foil many a dystopian sci-fi movie plot, Sen. Anthony Sykes, R-Moore, successfully pushed a measure to bar cities and states from confiscating guns during emergencies.

5. With wildfires having ravaged the state in recent weeks, you can at least seek solace that, thanks to HB 2329 by Rep. James Lockhart, D-Heavener, a convicted arsonist will never be able to be a firefighter. We didn’t know that had to be spelled out, but, whew!