The Brown Bag Deli is still serving the same excellent quality that has made it popular since 1978, but the building is for sale. 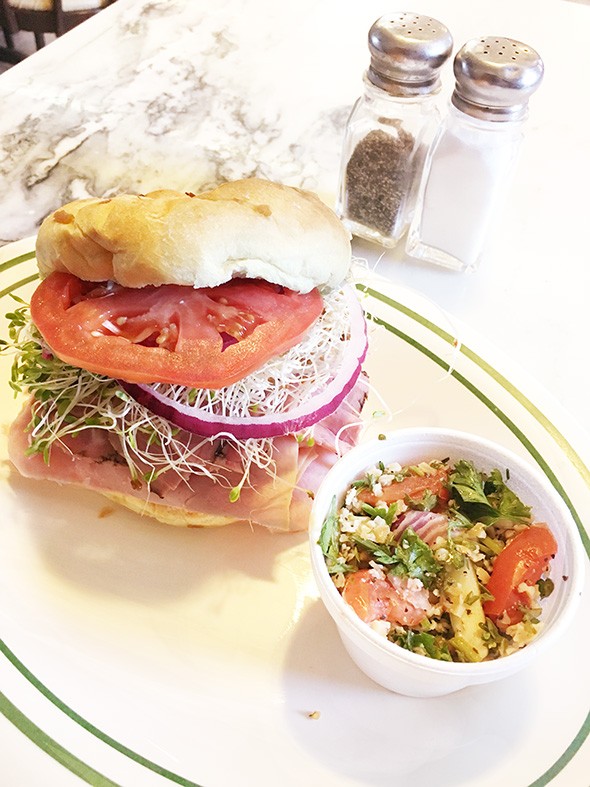 From its etymology, the word “restaurant” literally means “that which restores.” Celebrity chef Marcus Samuelsson is fond of saying the word means “to restore a community.”

I think both definitions are particularly apt because when you’re hungry, there’s nothing quite as restorative as a good meal, and when you think about how many plans have been made at restaurant tables, the importance of a welcoming and friendly restaurant in a community cannot be understated.

What works: The curry chicken salad and lentil chicken soup provide depth of flavor.
What needs work:The brisket was a little dry.
Tip:It closes at 3 p.m.

In this regard, I can only imagine the amount of customers that have been made whole again by The Brown Bag Deli, 7600 N. Western Ave., over the decades. Founded in 1978 by Jamil’s Steakhouse owner Greg Gawey, Brown Bag has been dutifully managed by new owners Sarah and Massoud Baghvardani for decades.

In honor of Oklahoma Gazette’s 40th anniversary, I wanted to review a restaurant that was open when the paper was first printed. Given Oklahoma City’s propensity to tear down historic buildings and the unpredictable nature of the oil-and-gas industry, there actually aren’t a lot of restaurants that are still around and kicking in Oklahoma City. The Gazedibles section in this issue gives a shoutout to seven, and the number expands slightly with the inclusion of always-fabulous Florence’s Restaurant at 1437 NE 23rd St., Someplace Else Bakery & Deli at 2310 N. Western Ave. and Legends Restaurant in Norman.

I can only imagine the hard work and long hours it takes to keep a restaurant open for more than 40 years, and it appears that it’s finally time for the Baghvardanis to retire and do something else. Sarah told me they’re ready to retire and the building is for sale. There’s no deal imminent, but I can’t guarantee how much longer The Brown Bag Deli will continue to help restore the Nichols Hills community.

My only regret is that I had not visited earlier. From looking online, I always thought it was a no-frills menu of sandwiches and soup with desserts like lemon bars, brownies and muffins. The Brown Bag Deli is much more than your typical hospital-level, cafeteria-style deli. It pulls off a depth of flavor thanks to the owners’ Middle Eastern heritage, which can be seen with the inclusion of tabbouleh and hummus on the menu.

"Eating a meal inside at The Brown Bag Deli feels like watching a Ken Burns documentary." tweet this

I walked in on a Tuesday afternoon to see that about four of the 10 or 12 marble tabletops were full of guests busy talking over sandwiches, salads and soup. Sandwiches can be ordered on pita, an onion bun, or white or whole wheat bread with the option of filling it with brisket, ham, chicken, turkey, pastrami, corned beef, roast beef, chicken or tuna salad.

There are four specialty sandwiches that get a little more creative with the use of cream cheese, herb mayo and sprouts in lieu of lettuce. Again, it’s not a world-changing menu, but the service and love with which the food is delivered make all the difference. Massoud works in the kitchen while Sarah takes orders and their daughter helps expedite and deliver food through its drive-thru window.

Eating a meal inside at The Brown Bag Deli feels like watching a Ken Burns documentary. There are a lot of kitschy photos of old people with thick mustaches and Americana items on the walls. The only thing that could make it more complete would be narration by Peter Coyote.

I ordered the Two-Hour Special, which is ham, pastrami and cream cheese with sprouts, onion and tomato on an onion roll with a side of chicken lentil soup, which is frequently Brown Bag’s soup of the day. The sandwich is huge. It is not quite as big or tall as the offerings at ND Foods, but it’s close. I couldn’t get the whole thing in my mouth without removing some meat from the sandwich. I loved that the restaurant used sprouts, which provide an earthy flavor compared to the hollow crunch of iceberg lettuce.

The real start of the meal was the soup followed closely by a spiced iced tea. I ordered iced tea thinking it would be standard Lipton brew, but Brown Bag makes its own tea that is spiced with orange peel and cinnamon sticks in-house. I liked the subtle hint of flavors, which is far superior than the over-the-top addition of fruit like mango; it was also freshly brewed. Nothing turns me off faster than stale iced tea. 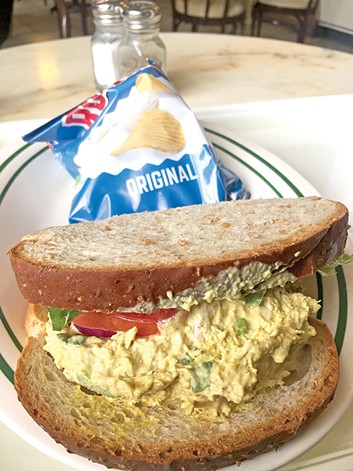 The chicken and lentil soup was a showstopper, and it’s an item that is perfect now that we’re getting to cooler weather. Its flavor was complex and layered without any heat, which is rare. An onion base was enhanced with turmeric and something else I couldn’t quite put my finger on.

My wife also tried the brisket sandwich, which was on the specials board. It was served with barbecue sauce on the side, which prevents the bread from getting soggy. The brisket itself was a little dry but otherwise tasty. I think that there are probably better sandwiches on the menu, but it scratches an itch if that’s what you’re in the mood for.

In my excitement to get a sandwich with sprouts on it, I overlooked perhaps The Brown Bag Deli’s most popular item, which is the curry chicken salad. A return visit rectified that problem. The flavor from the curry spice blend is not overpowering but present, and it’s basically just shredded chicken with celery. I found it to be an excellent treat, and it’s something that can be adapted for a low-carb diet by being served with avocado. I’ve made curry chicken salad for years by substituting mayonnaise for yogurt, adding my favorite curry blend with cumin and mixing in apples, golden raisins, red bell pepper, cilantro and lime juice. Eating Brown Bag’s version reminded me that something simple can be better; it allows the spice of the curry to meld with the coolness of the mayonnaise.

I’m sad to hear that Brown Bag is for sale, but I wish the Baghvardanis the best of luck in the next chapter of their lives. Hopefully someone will step up and keep everything the same.