One of my favorite scents in the world is when the holy trinity of Cajun cooking (green pepper, onion and celery) first hits the pot and melds with a thick, dark brown roux.

I wish the smell could be saved in candle form. The nutty aroma emanating from the buttery mixture is one of those scents imprinted into my memory and sent me in search of authentic Cajun food in the Oklahoma City area.

The smell inside the kitchen at Brent’s Cajun Seafood & Oyster Bar, 3005 S. Broadway, in Edmond must be intoxicating, where the kitchen staff is constantly making roux, standing over the thick mixture of flour and butter until it is the right consistency and color. It’s the building block for dishes like gumbo and étouffée.

Owner Brent Hickman’s family is from Louisiana, where his grandfather and great uncles opened Don’s Seafood in Lafayette in 1934. Hickman and his family moved to Houston, Texas, where they opened a slew of Cajun restaurants.

The restaurant business is in Hickman’s blood and is as thick as the roux that is stored in the kitchen of Brent’s for days so all of the flavors can marinate.

“My grandmother was the original chef,” Hickman said. “I trained under her, and it’s taught me to put a lot of love and passion into our food.”

Hickman relocated from Houston to Oklahoma City, where he founded The Shack Seafood & Oyster Bar, but he sold his share in the restaurant to open Brent’s in September 2016 because it’s closer to his Edmond home and the location at the corner of Broadway and W. 33rd Street is in view of the 66,000 cars that pass by daily.

If the Monday lunch crowd is any indication, the strategic move has paid off. I arrived 30 minutes after Brent’s 11 a.m. opening to find the restaurant’s main dining area nearly full. The hardest part was figuring out how to get into the restaurant. A pole sign is located in the corner of the parking lot, and another is affixed to the brick on the backside of the building, but the main entrance doesn’t have any signage.

“We’re a destination because of word-of-mouth,” Hickman said. “The building owner will only allow one sign, so we’re having to work around.” 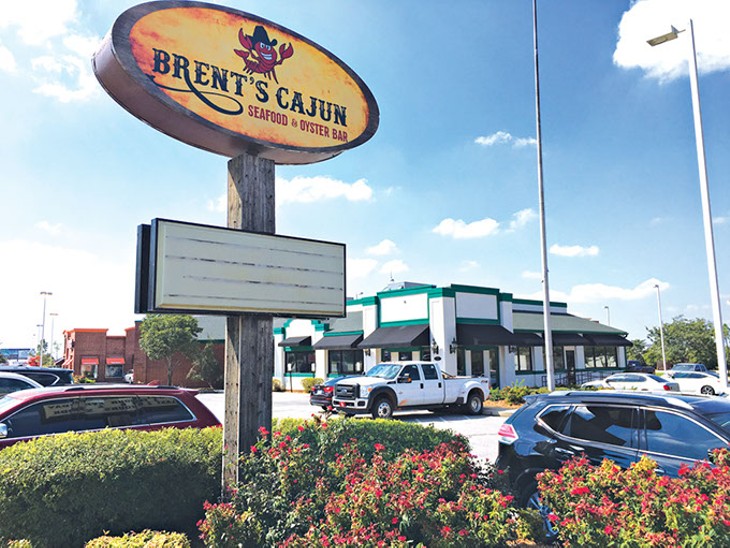 The woodwork inside the restaurant is warm and relaxing. I began with an appetizer of fried boudin balls ($8.99 for five). Boudin, which is a loose sausage mixed with rice and green onion, is a personal favorite. Instead of the mixture being stuffed into a pork casing, it gets rolled in breadcrumbs and dropped into the deep fryer. The result is a creamy and delicate flavor without being too greasy, and it’s complemented nicely with a peppery rémoulade sauce.

For my entree, I wanted to try the crawfish étouffée ($14.99 at dinner) because it’s a dish that highlights everything I want in Cajun cuisine: rich creaminess, complex flavors and a love of seafood. I subbed normal white rice for dirty rice, which is traditionally thickened with chicken livers and adds andouille sausage for extra flavor.

Even though it’s long past peak crawfish season, the meat in the dish tasted fresh and reminded me why it’s one of my favorite seafood items. The tails are able to cook longer in the sauce than shrimp and absorb the subtle hints of butter, smoky paprika and slight peppery heat.

“Cajun food isn’t about burning your mouth off with heat,” Hickman said.  “It’s about the flavors and everything coming together. It’s about a flavor explosion.”

I added a side of red beans and rice because it’s a staple dish for my home slow cooker, and I was disappointed. Full of beans and sausage, the dish was largely one-note: grease. The recipe for Brent’s red beans and rice is on restaurant’s website and shows the beans cook in plain water without the enhancement of stock. I see this as a missed opportunity for flavor. It might not be traditional, but I cook red beans in tomato juice and either chicken or pork stock along with cumin, ground coriander, oregano, bay leaves, smoked paprika and crushed red pepper.

The majority of Brent’s sales come through seafood. Hickman said oysters are caught one day and shipped the next and arrive three days a week. The ability of next-day shipping over the last few decades has changed the access to fresh fish in landlocked states.

“A lot of our seafood comes out of Houston, which is only a six-hour drive,” Hickman said. “The oysters were in the ocean a day and half ago, which is almost as good if you were right on the gulf.”

Hickman said the étouffée and red beans and rice are two of the restaurant’s most popular dishes. The seafood courtbouillion ($22.99) is an ode to the sea — catfish, scallops and crawfish tails are simmered in a broth flavored with both a roux and a tomato-based Creole sauce to create a stew. The Pontchartrain ($28.99) is grilled red fish topped with a sherry wine reduction that includes shrimp, crab meat and mushrooms.

“People tell me all the time that we have the best steaks in town,” Hickman said.

The menu expands to brunch on the weekends and includes such decadent dishes as Bananas Foster French toast and bayou omelets, which add seafood and andouille in a variety of cream sauces.

After the meal, I was so full that my next meal didn’t come until the next day. The boudin balls were my favorite dish. Brent’s Cajun is the perfect spot in OKC to indulge in authentic Cajun cuisine.

What works: The boudin balls are a creamy perfection of a regional delicacy.

What needs work: The restaurant missed an opportunity not cooking its red beans in stock.

Tip: Don’t sleep on the steak.