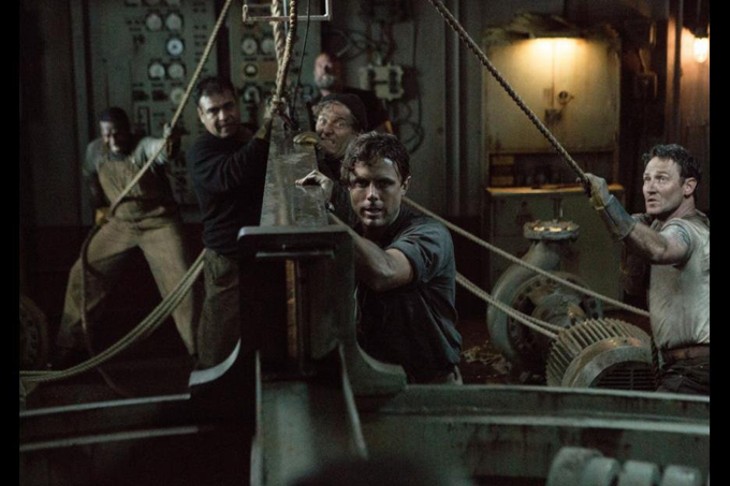 Some films infect you with a viral sense of glee, duty, sadness or hope. The torrential freshet of The Finest Hours will have you hacking phlegmy pneumonia for hours afterward. The film drenched its characters so palpably, I feared the productively coughing child next to me in the theater had been vicariously contaminated.

The true story tells of the bisected tanker SS Pendleton’s 1952 rescue during a howling Bostonian nor’easter by a small Coast Guard crew helmed by Chris Pine’s Bernie Webber while the Pendleton’s crewmen (led by Casey Affleck) try to hold out on a doomed ship. To a much less interesting extent, it also watches Webber’s fiancée, Miriam (Holliday Grainger thanklessly portrays an oil painting), mull around on the coast, anxiety-ridden.

When not aboard the squall-navigating ships, The Finest Hours succumbs to its back-of-the-box-recipe script. Written and rewritten, the team behind it jostles us from the tangible, exciting danger with ungentle reminders that we’re watching a movie. For each crashing wave impact on the half-ship that throws its crew into walls or 5 feet in the air, we cut back to the woefully boring mainland to see vintage-shop golem Miriam go through the motions of the determined wife fretting over the protagonist. She pleads to Webber’s commanding officer (played by the multi-accented Eric Bana) with all the emotion and pathos of a Post-it note reminder.

The inhabitants of dry land utter off-screen asides to explain things in such an absurdly blunt way, you’d think the town’s population suffered some citywide social dysfunction. Even on the bilged Pendleton, as soon as the action lulls, so do we. I agree with Affleck’s engine master, who, during one of the boring assemblies in the mess hall/muster station, refutes a crewmate’s trite discussions on life by saying he doesn’t “see the point in sitting around discussing it.” Sadly, someone did.

However, director Craig Gillespie and his director of photography, Javier Aguirresarobe, with their hard-nosed notions toward solidarity and working-class brotherhood, push and pull their actors apart and together with the brutal vorticity of the film’s frigid hurricane. A navigationally swirling tracking shot throughout the ship’s labyrinthine architecture sketches a crew as individuals and as a unit as they shout a new course heading in a naval game of telephone from the top deck to the bowels of the pump room. Unfortunately, the second time this occurs, we get almost the same exact sequence, following the same route shot with less fervor, rather than Gillespie trusting his audience to have attention spans long enough to remember where they parked outside the theater.

Yet, this is where the film thrives — burly men winching a capstan or creating a makeshift rudder from an I-beam while water levels rise toward important pumps belowdecks — visually explain the practicalities of survival. Pine, playing against type as a timid, square skipper, does well to lend workmanlike suffering to a visual storm easily discarded as fantastical.

The Finest Hours isn’t a wordy film by any means, but when its salty silence beats back the droning melodrama, you can hear its core cry out for its contemplative potential.

Print headline: Dry land, Despite the intensity of the action on the waves, The Finest Hours couldn’t avoid rough patches on land.