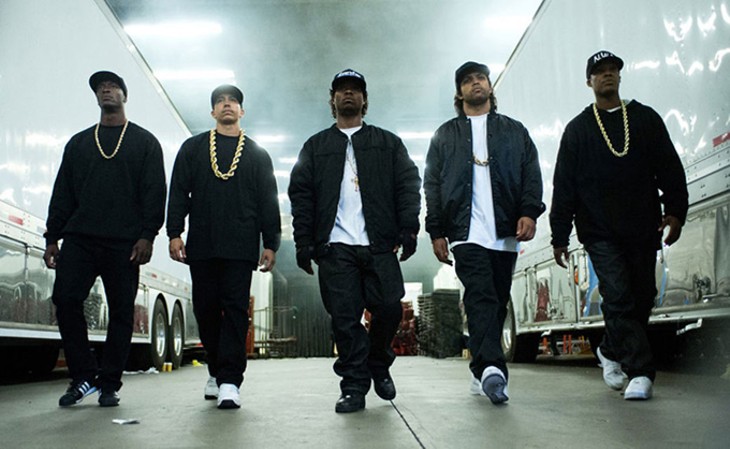 It has been said that history is written by the victors. It’s clear who the band’s victor’s are in in Straight Outta Compton, the film tribute to the iconic ’80s gangsta rap group N.W.A.

The movie sparked interest in and out of hip-hop circles due to the direct involvement of both Dr. Dre and Ice Cube — each successfully parlayed the platform N.W.A. offered them into solo fame — and the intriguing decision to cast Ice Cube’s son, O’Shea Jackson Jr., as a young version of his father.

You might have heard about the movie after a recent Beats by Dre-sponsored meme, Straight Outta Somewhere, went viral. Perhaps you noticed your niece or daughter, who doesn’t even know what state Compton is in, post a picture with a caption such as, “Straight Outta Toilet Paper.”

But don’t let the meme confuse you. Straight Outta Compton is a fan movie.

Aside from a trio of producers including Dre, Cube and Tomica Wright — the widow of Jheri-curled N.W.A. frontman and Ruthless Records founder Eazy-E — the film keeps it all in the family with F. Gary Gray (Friday) reuniting with Cube as director.

The movie opens up with individual vignettes that serve to give us background on the group’s three main players. The backstories of N.W.A. members MC Ren (Aldis Hodge) and DJ Yella (Neil Brown Jr.) are not explored.

The band’s notoriety skyrockets after signing to Priority Records — both positively and negatively.

Also, the success of the song “Fuck tha Police” and the rebellious nature of the band’s debut studio album causes conflict with law enforcement and concerned parents.

In all honesty though, Straight Outta Compton is less of a movie about N.W.A. and more of a three-way biopic about the group’s biggest names.

The band’s original roster is broken up halfway through the movie, and we spend the remainder watching Cube, Dre and Eazy struggle with their lives and careers before reconciling just prior to E’s death from HIV/AIDS.

The movie would have benefited from a tighter story. Too much focus on post-N.W.A. years distracts from the impact it had when it was together.

Straight Outta Compton is at its strongest when the group is together.

A montage depicting the recording process of its debut studio album highlights the crew’s chemistry.

The movie does a good job of conveying a sense of brotherhood, even while they’re being harassed by police.

The movie is also beautifully shot in parts, especially the depiction of Compton itself. Gray shows the city full of life, even if it wasn’t full of hope.

And despite N.W.A.’s controversial history, the movie finds time for moments of levity even in the midst of serious drama.

This is important, because while the group might have been protested for its violent and radical themes, N.W.A. was fun at its core, more bravado than bleak. Brown and Mitchell deliver laughs as Yella and Eazy.

Gray even found a way to sneak in a few Friday references.

The biggest shame in the making of this movie, and for fans of golden-era hip-hop in general, is Eazy-E’s early death. This film desperately needed his input.

It’s clear that Eazy’s working relationship with Heller is told from Cube’s perspective.

In fact, Eazy’s second act in Straight Outta Compton plays as a pity party. If he was alive, he probably would admit that he made mistakes during that time, but I doubt Eazy — the street kid that he was — would want himself portrayed as a hapless victim.

It’s notable that Heller also was not consulted for this film. While the movie treated his character more fairly than expected, it also ignored any contribution he had to the group’s success.

Heller has been painted as the villain in the N.W.A. story, and it’s likely he used uncouth business practices. But he also took a chance on a group that was too radical for anyone else to consider and made it into a major success — all without sacrificing its street style.

Those who actually did have some say in the film fell short of treating Heller’s character with any kind of journalistic distance.

Dre and Cube, for the most part, come across as the faultless geniuses who carried the group.

Jackson’s portrayal of his father, while visually striking, was reserved. And that might not be his fault. He did a great job depicting his dad’s own version of his younger self.

But for all of its shortcomings in objectivity, it’s important to note that this is not a documentary, nor does it pretend to be.

There are no shocking revelations made, and the story is well-known to N.W.A. fans.

This movie was made for two kinds of people: old fans who want to escape back to rap’s most exciting years and young fans who might know the music but weren’t around to experience the impact the group had on hip-hop and pop culture.

As a somewhat typical but entertaining band biopic, Straight Outta Compton is not a bad time at the theater.

Print headline: Swagger, Compton’s N the House with a new movie about a rap group that forever changed mainstream music.