Review: The Force is strong with newest Star Wars addition 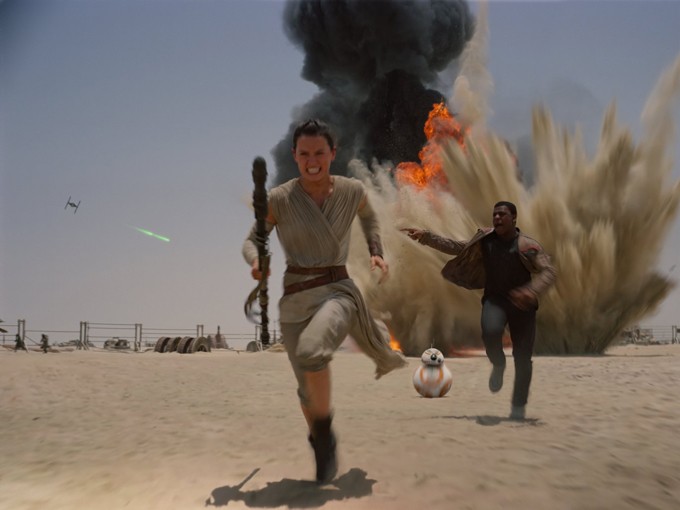 Star Wars: Episode VII - The Force Awakens doesn’t disappoint. Thirty-two years after the events of Return of the Jedi ended the biggest trilogy in movie history, we’re back with the franchise that inspired a generation, not the cartoonish missteps of the prequels or the admirable yet inherently insufficient animated shows or novels.

For the fans once lined up for their fourth screening of Star Wars back in 1977, only a certified cultural event would suffice as revival. Luckily, despite its problems, the film pleases newcomers and the perpetually Jedi-robed alike, striking a balance between fan service and echoes of the original film.

Aside from the reactionary perking of eyebrows and whispers to seat-neighbors (“Look who it is!”), the original cast helps introduce us to the world. Han Solo (Ford), once a detractor of the Force, explains to Rey (Ridley) and Finn (Boyega) that yes, it’s real; the Jedi are real. The same vague, mystical wonder — accompanied by the twittering flutes of John Williams — fills the screen that ran imaginations wild in the ’70s.

Ridley commands the screen viciously, with a lithe, sanguine vigor that rides the line between hotheaded youth and impassioned excitement. She’s excited, just like us, to see the new world opened up to her. Bound to be a fan favorite, expect ubiquitous Rey costumes for the foreseeable future.

While an early alien chase hearkens back to the cheesy, CGI elasticity of the prequels, the film looks amazing.

Director J.J. Abrams handles the film’s tone perfectly, even if his heavy-handed symbolism often gets in the way of things like plot. Speaking of, this is the third time a Star Wars movie has had this exact plot.

Yes, the big bad authoritarians have created yet another giant weapon, and yes, our heroes have to blow it up. It’s all window dressing to a more interesting story between characters, especially entitled trust fund Sith Kylo Ren (Driver). His whiney darkness — like that of the brats from Willy Wonka & the Chocolate Factory — oozes and crawls over Finn, Poe and (especially) Rey with an uncomfortable tension.

Suffering from its own knowledge that it’s the revival of a new trilogy, The Force Awakens fails to tell a complete story.

However, it gives us exactly what we need to jump back in: a revamped introduction to the universe where our guides are no longer strange bearded men in the desert, but old friends; a struggle against a clinically conformist aggressor by a ragtag group of aliens, droids and kids who, like those in the audience, entered the story thinking, I could never do anything like that.

The often self-deprecating humor, the spectacle, the overwhelming love and the giddy, spiraling descent into the heart of a new adventure return for anyone looking to revisit a galaxy far, far away.