A new board of directors for Freedom Center has a long-term plan to restore the building and revitalize the civil rights landmark. 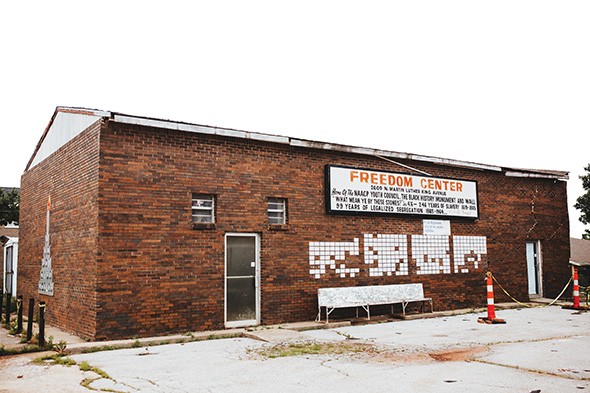 Efforts are underway to revitalize and repair one of Oklahoma’s most important civil rights landmarks into a community hub.

Freedom Center was burned down in 1968, but the community raised money to rebuild. It has been vacant for about a decade. Today, the building is in disrepair, with commemorative plaques falling off the facade and bricks crumbling.

Michael Washington, a local activist, said he was raising money to repair the building and create a community space. In 2017, he filed paperwork to become the registered agent for Freedom Center Inc., the nonprofit that controls the building. A dispute over control of the building followed between Washington, the Oklahoma chapter of NAACP and community members.

In 2018, Historic Preservation Commission recommended the building be declared a historic landmark. That same year, a judge settled the dispute over control of Freedom Center by naming former councilwoman and retired county commissioner Willa Johnson the receiver of the property.

Marilyn Luper Hildreth, Luper’s daughter, said Washington does not have authority to raise money for Freedom Center, which now has a new board of directors leading that charge.

“[Washington] is not a representative of Freedom Center,” Hildreth said. “Leonard Benton is the court-appointed trustee for Freedom Center. … I’m working on the board, and we’re working for the reorganization of Freedom Center. After my mom died, I’ve been in the hospital several times and I just have not been able to do everything like I was doing. I hate that, but sometimes it happens.”

Due to health concerns, Johnson reached out to Benton to become the new receiver of the property. He was appointed receiver by the court in late 2018.

“Mr. Leonard Benton is the new receiver of the property, and he’s doing a great job putting his board together and moving forward,” she said. “I hope it is expanded because there is a lot of memorabilia that should be in the Freedom Center and make it a kind of museum to all the hard work that the African American people, especially the children and Ms. Luper, put into it. I’m just really praying that it turns out well. Based on what I’ve heard so far, it has that opportunity.”

Benton, chairman of the new board, said Washington has no legal rights to Freedom Center and is currently not involved in the board’s revitalization efforts but was instrumental in bringing attention to the need for repairs.

“Washington was the gentleman who did recognize that something needs to be done with the Freedom Center and he was the one who went to the Oklahoma City Historic Preservation Commission,” he said. “He has no rights to represent the Freedom Center. He continues to at as if he is a representative.” 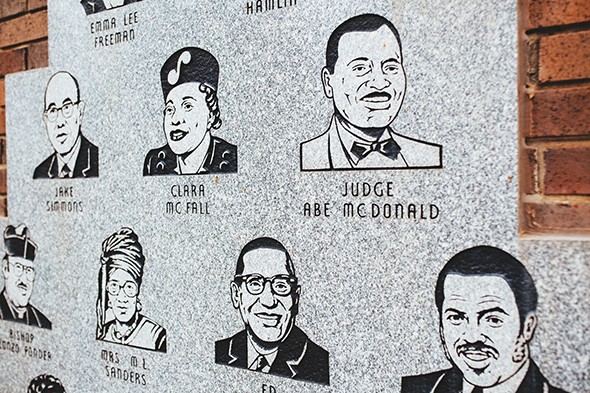 Freedom Center’s new board of directors includes former members of the youth council. They are now meeting monthly to discuss the future of the building.

“We had a mini retreat for the purpose of beginning to establish goals and clarify our mission and purpose, including a new constitution and bylaws to organize Freedom Center as a 501(c)(3) tax exempt organization,” Benton said.

The organization is still in the process of reinstating its tax-exempt status, so it is currently not asking for donations.

“We’re developing a more specific plan in terms of how can our community be the most helpful, so when we go to the community for support, we have a well-defined plan in terms of what it is that we need and how contributions can be made,” he said. “But at this point, we are not asking for that level of support, but that will be forthcoming.”

Benton said it identified three phases for the future of Freedom Center.

“The first is that we are in the process of stabilization. We’re trying to get the building to be safe and sound to be able to have meetings and those types of things … to be able to have safe access to the building,” he said. “We would also like to restore the Freedom Center to a quality facility that would maintain the basic character of the building. … Then more of a long-term plan that we have for the facility is the construction of a new Oklahoma City Clara Luper Civil Rights Center that would be constructed at a museum-caliber type of facility.”

“The property is one of the most significant, important things that we could observe and celebrate and to make permanent in our community.” — Leonard Benton tweet this

The new building would be an annex of approximately 8,000-10,000 square feet next to the existing building.

“We have secured the services on a pro bono basis of an architecture group to develop a site plan and some preliminary type of rendering to provide for us and cost estimates. We have offered the proposal to the mayor and city council to be included in the MAPS 4 projects,” he said. “We’re asking folks to go to the mayor and city council … to support the concept for the Clara Luper Civil Rights Center.”

Hildreth said the organization hopes to open the building for the general public to enjoy and to become a place of education.

“What has happened is students do not learn that much about black history in the school system at all; as a matter of fact, it’s not part of the curriculum. So it is up to us to make sure that our community is aware of our history,” she said. “We have an obligation to continue to preach about where we’ve come. If you don’t know where you’ve come from, you have no direction of where you’re going. That’s the general idea; we must make sure our young people are aware of the struggle.”

When Benton was asked to lead the revitalization efforts, he felt honored and excited. Having worked in the nonprofit sector for years, being involved and leading various multicultural organizations and driving past Freedom Center often, it felt meant to be, professionally and personally.

“The property is one of the most significant, important things that we could observe and celebrate and make permanent in our community,” he said. “It’s something that is uniquely historic that we have not told a good story of here in Oklahoma City. [Clara Luper Civil Rights Center] would be the first civil rights museum in Oklahoma. … It is an opportunity for us in Oklahoma City to recognize that uniqueness that as a community.”