You say you want some Revolución? Well, you know, you’re going to have to get in line.

Rachel Cope and 84 Hospitality Group are on a roll. Their restaurants Empire Slice House and Gor? Ramen + Izakaya are the toast of the Plaza District. If you know anyone cool, they’ve probably asked you to dinner at one or both.

The most recent addition to the family, Revolución Taqueria & Cantina, 916 NW Sixth St., is located next to breakfast powerhouse Sunnyside Diner in an area of the city that is ripe for renewal and growth. And while the buzz was slower to build, it’s quickly approaching critical mass.

But I have a secret for you. Revolución’s tacos are good, but they’re not the best things on the menu. By and large, they’re quite tasty. And at $3-$4 each, they’re also affordable.

If you’re looking for classic taqueria fare, there’s no better choice than pork carnitas tacos ($3 each) with cilantro and onion. This is as simple as it gets and spotlights the slow-roasted pork’s flavor.

Both vegetables are support players in the carnitas taco. The green bite of cilantro and sharp, nasal heat of raw, diced onions accentuate the pork by playing against it. Where onion is crunchy and harsh, pork is tender. Raw cilantro’s bite contrasts the subtle sweetness of carnitas. For an extra splash of flavor and moisture, Revolución offers a few housemade sauces worth experimenting with.

Carne asada ($3.50) tacos are much the same, with onions and cilantro, but the assertiveness of savory beef comes through more clearly than mildly sweet pork. I loved them plain, but the provided red salsa really amped up the experience.

There’s a bit more going on with the al pastor taco ($3.25), which uses rotisserie-cooked pork, allowing savory juices to marinate the meat as it cooks. Because of its concentrated flavor, cooks wisely pair it with more pungent flavors, adding pineapple and radish to the mix with cilantro and onion. My only issue with this one is that the pineapple sometimes overpowers everything else, which would be a problem if I didn’t love pineapple so much. If you are of a similar opinion, then a better bet might be cauliflower al pastor ($3), which replaces the pork with cauliflower and really lets the pineapple run wild.

I was less enthusiastic about the Mexican squash taco ($3.25). The idea behind it is nice, but the mild flavors of zucchini and chayote (a Mexican squash) are lost against the sweetness of grilled onions and spice of adobo verde sauce. 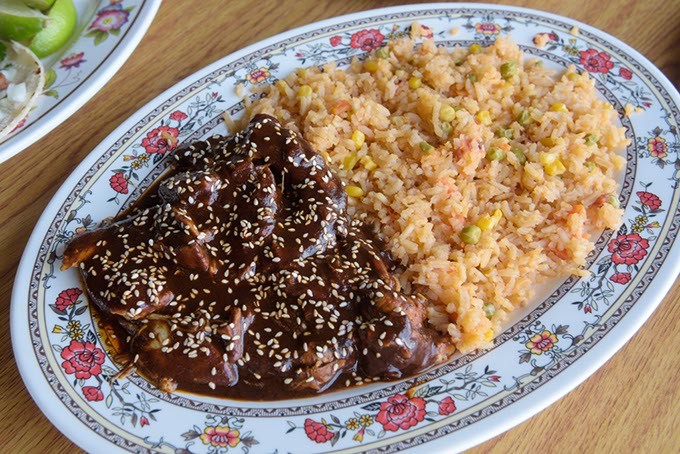 The best of the best, however, is the simple shrimp taco ($4) with mojo marinade. What a wonder shrimp is! It’s texturally fascinating, retaining a lovely snap that feels satisfying against the teeth. It greedily soaks up the marinade, too, giving diners a burst of spicy tartness with each bite. The supporting cast of pickled onions, pico de gallo and avocado salsa verde are winners, too. Often, I shy away from tacos with so many ingredients, but in this version, each bite is different in a new and tasty way.

Shrimp also play a big part in Revolución’s ceviche ($5 for small, $9 for large), which deserves a hearty recommendation. Ceviche is sometimes made with raw seafood that is chemically cooked in acidic juice, which creates its own heat in a process called denaturation. Here, it’s cooked with heat before it’s added to a mix of cod, radish, jalapeño, onion and tomato. It’s similar to a stew, except it’s served cold. If you enjoy shrimp cocktail, ceviche is a natural next step. While I’m happy to eat mine with a spoon, the added option of crackers for dipping and scooping is nice.

All that said, the best thing on the menu is offered under the heading Casa De Miguel.

Bistec asado ($12.25) is marinated steak and potatoes with pineapple and jalapeño. Tlayuda is ($14) is a bit like a pizza and a lot like a tostada with black beans, chicken tinga, avocado and more atop a large, crispy corn tortilla.

But the crown jewel of Casa De Miguel is mole rojo de pollo ($11.75). Oaxacan mole is a sweet, mildly spicy creamy sauce enrobing perfectly tender pieces of chicken thighs served with rice. You need to get in the habit of ordering mole, and this is a good dish to start with.

You should still order tacos at Revolución, especially the shrimp in mojo marinade. Ceviche is a wonderful, fresh treat during the warm months. And mole rojo de pollo, whether for one or shared among a table, is a must.

Print headline: Delectable rebellion, Revolución Taqueria & Cantina’s tacos are a treat, but the mole is the true star.

What works: Chicken mole isn’t a taco, but it is essential.

Tip: Be careful of the spicy heat of the ancho-chocolate ganache with churros.