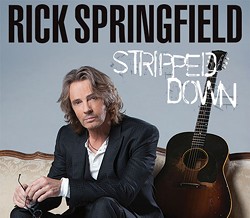 A generation grew up with Rick Springfield. Whether it was singing along to his music on FM radio or watching him on TV, he became synonymous with the 1980s.

However, the rocker is not stuck in the past. Springfield changed with the decades and released Rocket Science, his 18th studio album, earlier this year. The project showcases Springfield with rock and elements of country and R&B.

He brings his Stripped Down tour to Oklahoma City for one show 8 p.m. April 9 at The Criterion, 500 E. Sheridan Ave. The stop includes music, storytelling and a special Q&A with the audience.

“I will be playing some of the tracks from the new album,” Springfield said during a recent Oklahoma Gazette interview. “Of course we will play the hits and have some other surprises, and I will probably smash a few roses.”

The Australia-born musician reminisced about his early days performing in the United States. His first television appearance was on a 1972 episode of The Sonny & Cher Comedy Hour.

“It was all pretty surreal,” he said. “I’d really just landed in the country, and didn’t know much about how things worked. I just accepted it all and figured everyone was there to help me with my career.”

His early musical influences, he said, were The Beatles, The Who and The Kinks.

“I listened to English bands mostly,” he said. “I still have some of the old records I bought back then, but they’re probably warped or broken. I never took care of my records, and once I’d learned how to play the song, I never really played the record again.”

When the 1980s rolled around, his album Working Class Dog became the soundtrack for teenagers everywhere. The single “Jessie’s Girl” hit No. 1 in the summer of 1981. In 1982, it earned him a Grammy Award for Best Male Rock Vocal Performance.

In 1981, he also took on a pivotal role as Dr. Noah Drake on ABC-TV’s General Hospital and become every housewife’s heartthrob. He played Drake on the show through 2013.

Through the years, Springfield continued to record and act. Last year, he portrayed Dr. Irving Pitlor in the HBO crime drama True Detective. He also hit the big screen with Meryl Streep. He costarred as Greg in the summer hit Ricki and the Flash, which earned over $40 million at the box office, according to tracking site Box Office Mojo.

“I just finished a movie called Traces, and we are all actively looking for the next project,” he said. “There is such great writing now on TV, like the show True Detective that I was just in, so the prospects are very exciting.”

During his music career, Springfield racked up 17 Top 40 hits, including “Don’t Talk to Strangers,” “I’ve Done Everything for You,” “Rock of Life” and “Affair of the Heart.”

He has sold 25 million records and said his fans are what keep him going.

“My shows are really a party,” Springfield said. “I’m grateful that albums like Working Class Dog didn’t fall on deaf ears. I never get tired of playing the old songs because it really is the energy from the audience that gives them their power live.”