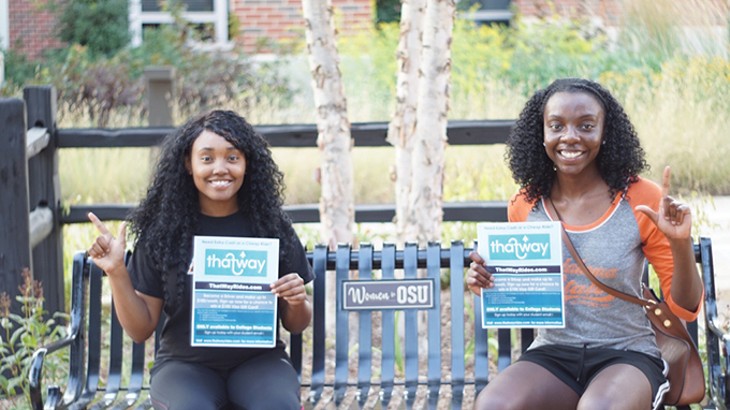 A new rideshare program is taking to the streets of Oklahoma City. ThatWay is a startup created by two Oklahoma State University graduates, Sammiyah Abdullah and Ashané Woody, and aims to provide students with a safer and more cost-efficient means of transportation.

The idea originated as a social media platform designed for students to interact with one another and expand their social horizons; however, it wasn’t long before an entirely new market was realized.

Abdullah recounted the inconvenience that often accompanied her when traveling home to St. Louis, Missouri, over her regular breaks from school.

“I just wondered, ‘Why isn’t there a service out there where students can meet up with other students and commute these long distances back home during the school year and over break?’” Abdullah said.

Instead of nixing the social aspect, they decided to add a ridesharing component.

“We were pretty proud that we could keep them both and kind of intertwine them,” Woody said. “It’s not just a ridesharing website.”

According to National Center for Education Statistics, an estimated 19.9 million individuals are expected to enroll in degree-granting institutions for the 2018 school year. Of these students, those with vehicles of their own remain fewer still.

“Sometimes your car might mess up or you don’t have a car and you might want to go somewhere or meet new people,” Woody said.

Even if students don’t use the rideshare to travel home, Abdullah and Woody hope the social media aspect will allow users to meet others willing to carpool over breaks. If nothing else, the founders believe they’ve come up with an effective tool in getting people out and about in social settings, labeling the site as a “platform for college students to create their own community.”

“We want to create a community for students to find other students to make these trips with a fee that isn’t as expensive as your traditional travel that we have today,” Abdullah said.

For a small booking fee, riders can purchase a seat in one of the vehicles. Drivers are compensated based on the mileage reimbursement fees dictated by the Internal Revenue Service. Both riders and drivers alike are verified as students as a safety precaution.

Though the rides will be cheaper than the rates charged by Uber or Lyft, the founders of ThatWay do not see themselves as competitors due to the fact that their service is restricted to college students.

On the other hand, other sites like eRideShare.com might not offer the same advantages. Aside from safety concerns, the founders of ThatWay believe they have a more secure means of finalizing transactions thanks to their system, which is secured by PayPal.

To make the platform more user-friendly, Abdullah and Woody plan to develop an app this semester. In the interim, they intend to ensure the service is running smoothly and expect to gain a better understanding of their user base.

“We actually tried to create the app ourselves,” Woody said. “We got kind of far, but there were certain things we needed help with.”

Accessing the service will be temporarily limited to the website until the app is fully developed.

“We’re going to put different topics and things on [the site] so people can just go on their ride and hopefully start to get to know new people,” Woody said.

She recalls a time when she would have been grateful to access such a service.

“I could’ve had people ride with me or made friends along the way, and then I probably wouldn’t have went home as much,” Woody said.

They also hope to introduce a subscription service so people don’t have to pay for individual rides, making the service even cheaper than is currently advertised. As of now, the only income they anticipate is through booking fees, which shouldn’t be an issue, provided more people sign up to use their service.

In the future, Woody and Abdullah hope to reach out to bigger businesses to offer promotions via partnerships. For example, they thought to reach out to the Oklahoma City Thunder basketball team to offer a select number of free tickets in exchange for providing transportation.

“We’re just trying to get big enough to where we can kind of work with different companies,” Woody said. “If we can, that’d be great because I feel like it would help out the arena by bringing in more people and just showing how fun the ride was and how much fun they had at the game … things of that nature.”

So far, they’ve managed to offer their first promotion giving new riders a chance to win a $100 Visa gift card. They’ve also been in contact with student housing property managers as a means of spreading the word to incoming residents.

Abdullah, who also acts as the company’s chief of marketing, has been hard at work trying to get more people on board. Still, she wants it to be clear that even though they “provide a platform for travel,” they are not “a travel service” and have much more to offer in the way of student transport and socialization.

“We have a lot of ideas. It’s just kind of fitting them together,” Woody said. “We’re trying to start off small and see how that works and then grow from there.”