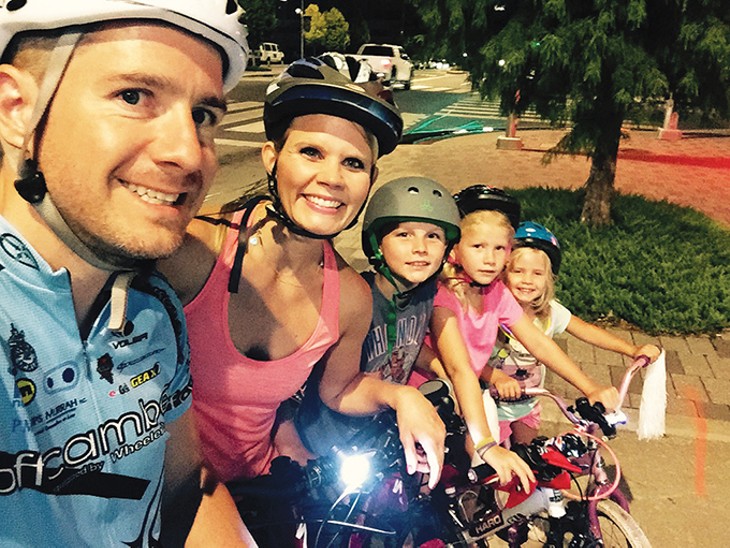 Summer Solstice on June 21 is the official first day of summer, the longest day of the year and a time for celebration at Myriad Botanical Gardens. The Summer Solstice Celebration makes the most of the long twilight with free yoga, live music, flower crown making, vendors, food offerings and a Full Moon Bike Ride and Run.

The bike ride and run usually draws hundreds of attendees geared up to get some exercise and have fun doing it. The run is a 5K led by OK Runner. At 8 p.m., runners will take their marks and enjoy the non-competitive run winding through scenic downtown as the sun sets.

At 8:30 p.m., cyclists will helmet up and join in the fun, pedaling en masse through the city. Often, the rides follow alongside the Oklahoma River or snake through downtown.

Erin Engelke, 39, will take her mark with her fellow runners for the 5K. She’s an avid runner but also loves to ride bicycles with her husband and three kids. Between the five of them, they own eight bikes.

Jason Engelke; the couple’s son Gabe, age 12; and daughters Ava, 10, and Elin, 7, will be Erin’s cheerleaders as she crosses the finish line. The family has a routine for these events, being regulars for the past four years. Dad and the kids drop Mom off at the start of the run, park and unload their bikes and safety equipment and then wait for Mom at the finish line, with her bike, shoes and helmet ready.

“Then I throw my shoes on and hop on my bike and we head out for the ride,” Erin Engelke said. “The ride is an easy one, and even after running a 5K, you’re not huffing and puffing.”

The Engelkes are one of many families who try not to miss the Full Moon Bike Ride and Run, which is held monthly through August. June 21 is this season’s first event, as last month’s was canceled due to a threat of extreme weather.

While Erin Engelke might get the most intense exercise at the event, Jason Engelke is more invested in the local cycling community. He participates in many local riding events, including the Tuesday night Wheeler races and Cyclocross, an event combining short courses of various terrain and obstacles.

Elin has been riding a bike in the Full Moon Bike Ride and Run since she was still in a carseat. The Engelkes are a biking family, for sure, and they look forward to the Full Moon event every month, rarely missing one.

The Full Moon rides combine healthy activities in a social and festive atmosphere. During the ride, they said, some cyclists get extra festive with stereo setups on their bikes. Some people decorate their bikes with lights. Some decorate themselves. During the Halloween Bike Ride and Run, the sky’s the limit.

“Cycling is a friendly sport, and the majority of people down there are smiling and happy because exercising releases those endorphins,” Jason said.

Biking might be a social sport, but running, she said, is a bit more solitary. Being more physically demanding than a leisurely ride, it’s hard to converse with fellow runners.

“Runners, they kind of just run on their own,” she said. “But it’s fun when you get to the end because there’s a whole line of cyclists that are cheering you on. It’s definitely a team environment. It’s not like cyclists against runners or anything.”

Jason is trying to start a bike club for elementary school-age kids in the metro. The idea comes from Tulsa Bicycle Club, which he said has been extremely successful in getting kids active and engaged with biking.

“They have a curriculum the kids follow with teacher support, and they have a lot of volunteers that come in from the community,” he said.

The kids learn bike etiquette and safety, bike maintenance, riding techniques and more. If they stick with the program for the entire school year and graduate the program, they are awarded a bike.

“The Tulsa schools have found that it is so meaningful, it’s increased the attendance of the kids, it’s increased the overall positive outlook of school by the members of the Bike Club,” Jason said. “They’re trying to track it to see if it will increase their graduation rates.”

He is excited by the growing cycling community in the metro and about the area’s investment in creating trails, such as the one Oklahoma City is building to link the districts and Edmond’s trail project, which links that city’s parks and public spaces to Lake Arcadia. 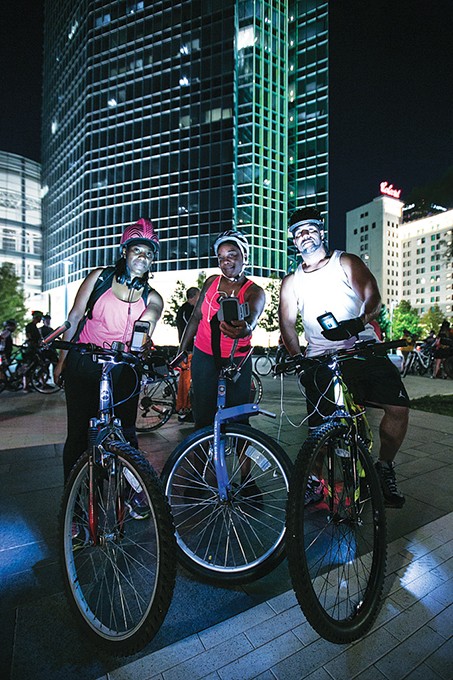 The Engelkes offered some tips for safe riding and running and some of the rules for the Full Moon Bike Ride and Run.

Riders are required to have a blinker or flasher on the front and rear of their bikes. Because it’s a twilight and moonlight ride, a headlight is also a good idea. Spokies Bike Share OKC bikes will be available to rent at the event and are equipped with headlights and taillights.

When biking in large groups such as at the Full Moon event, riding etiquette is very important for safety.

Signal the direction you’re going to turn and observe any traffic signs and signals. If you’re passing a slower rider, announce yourself and on which side you’ll be passing. A simple “on the left” will suffice.

Point out any rocks or potholes, water spots, gravel, railroad tracks and other hazards on the road and try to ride consistently and don’t make sudden moves or brake unexpectedly. It can be tough to communicate these things when riders wear headphones.

In general, Jason said the law states that when cars approach a cyclist from behind to pass, they’re required to give at least three feet of clearance to the cyclist, but five feet is a better space for the safety of all.

“It’s a human being on that bike,” he said. “It’s likely a mom or a dad that’s just trying to get out and be healthy. They’re not meaning to be a nuisance and slow people down.”