An exhibit at Fred Jones Jr. Museum of Art explores the art and advertising that transformed the way people viewed the American West.

Get your ticket to ride across the pastoral landscapes of the American West in an exhibit that welcomes its viewers to climb aboard for a scenic voyage through time and history. For a limited time, Fred Jones Jr. Museum of Art presents over five dozen pieces by Thomas Moran and other prominent artists of the Gilded Age in a display brimming with the spirit of adventure and travel.

Between the 1880s and 1930s, when American railway travel was at its peak, railroad companies across the United States and Canada commissioned artists to create a series of images intended to inspire travelers to journey west into a great civilization that was only beginning to unfold. In what seemed like a unique opportunity to further their careers, the artists created iconic images that have forever shaped the ways rail travel and the West are perceived in the social consciousness.

Ticket to Ride: Artists, Designers, and Western Railways is free and runs through Dec. 31 at Fred Jones Jr. Museum of Art, 555 Elm St., in Norman.

The display consists of paintings and posters and also includes art from the original advertising campaigns commissioned by the railways.

“[The works are] arranged to make you understand how these objects together created our perceptions of the American West that still continue today,” said Hadley Jerman, curator of the exhibition. “We think of the Grand Canyon as being picturesque and kind of romantic in a way.”

With a background in graphic design, Jerman was looking for a way to merge art and design history, focusing on its relationship to the American West. A graduate student at University of Oklahoma, Jerman was inspired by her own studies to write the catalog for her new exhibition, taking information from her dissertation to explain the overlap between early American travel and artistic expression.

And it took a lot of work to get these pieces together under the same roof. According to Kaylee Kain, Fred Jones Jr. Museum of Art director of communication, Jerman’s passion project has been in the works for the past two years.

“It was a lot of research on the front end trying to figure out ‘Okay, whose stories do I want to tell?’ and ‘Where does that work exist?’ and ‘What might be interesting to people here?’” Jerman said.

Only five objects on display come from the Fred Jones collection. The rest were sourced from museums both national and abroad, a process that took over a year to complete. Luckily, the staff wasn’t restricted to art galleries alone, as some railroad companies preserved the original works.

In spite of a few minor complications, the exhibition was underway. Just how those pieces were to be presented, however, posed another challenge that called for a more creative approach. On her desk, Jerman rearranged the postage stamp-sized images of the works she intended to display until she discovered a sequence that told the stories she wanted to tell.

“It became obvious when I saw all the work in front of me,” Jerman said. “Making the galleries like a train trip would make sense, and it would be kind of cool to be able to emulate this journey through the West.”

In doing this, she not only captures the persuasive messages of travel the artists were trying to convey, but she also communicates more personal descriptions of the masterminds behind the works.

“[Like the passengers that rode them,] these artists weren’t tied to any one railway or any one location,” Jerman said. “They wanted to travel.”

Dr. Joni L. Kinsey, professor of art and art history at the University of Iowa and longtime scholar of Thomas Moran, elucidated the evolving perception of travel in the time following the Civil War.

“This period … was one of just tremendous expansion in visual imagery and travel, and together, they opened up peoples’ imaginations to places that they previously had never even known about,” she said.

She described the blending of art with new forms of transportation — especially railroads — and new forms of publishing as a “three-part conjunction … that brought people to new places.”

“If you were an armchair traveler at home, the places were brought to you in the form of these pictures,” Kinsey explained. “And that really was revolutionary. We take this sort of thing for granted now, but at the time, it was all incredibly new and eye-opening to people.”

“My material will certainly dovetail well with [the exhibit],” she said. 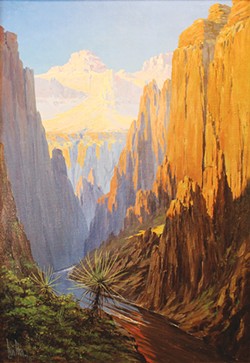 But that’s not all there is to offer. In addition to the lecture by Dr. Kinsey and a gallery talk presented by Jerman on Nov. 13, the museum will also host its debut family special, All Aboard! a holiday-themed event intended for children and grown-ups alike.

While it was a collaborative effort, Mark White, chief curator and interim director of Fred Jones Jr. Museum of Art, had been wanting to start a yearly holiday tradition for some time.

“He was really interested in trying to do something that you weren’t really going see replicated in a lot of other museums,” said Melissa Ski, the museum’s director of learning and engagement. “He wanted something that was going to be more original and also speak to interests that could tie into the collection.”

The event is 6-8 p.m. Dec. 13 in Sandy Bell Gallery and includes artistic activities, banjo lessons and a hot cocoa bar with the option to make your own one-of-a-kind cookie. Visitors can either eat their baked good on site or “take one home for Santa,” Ski said.

Two model trains built by Oklahoma Model Railroad Association will also be displayed. One train was constructed with a Historic Route 66 theme while the other is expected to be a general design.

A train-lighting ceremony is scheduled for 7 p.m. that night.

“The funny thing is I think it’s the only part of the museum where there will be trains,” Jerman said, alluding to the irony of an otherwise trainless exhibit emphasizing artists commissioned by railways across North America.

Those who enjoy the event can plan for another family-oriented gathering in the following year.

“We already have the plans in place for next year,” Kain said. “We are going to do this every year, so people can count on that.”