Basketball-themed comedy benefit show Why Not? returns to OKC. 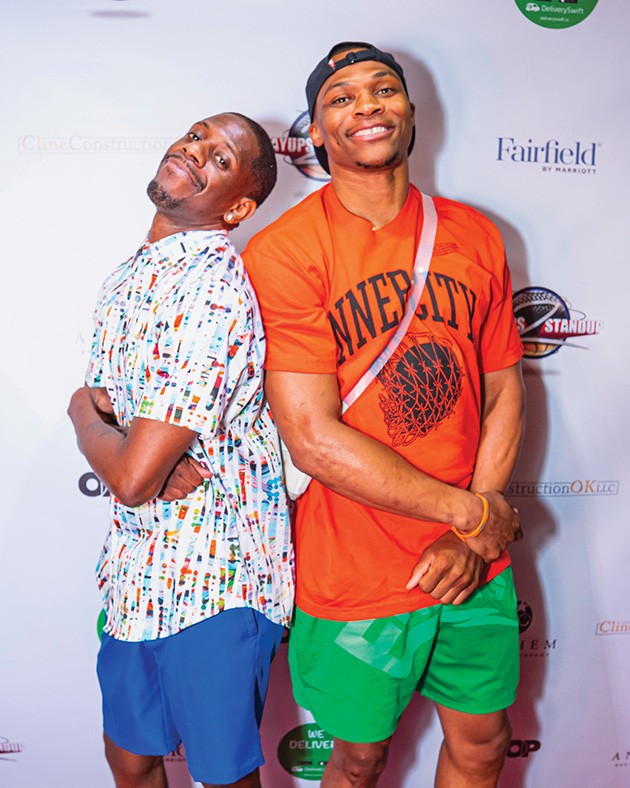 Why Not? Comedy Show

Back for its fourth year, the Why Not? Comedy Show returns to Oklahoma City Jan. 10.

The show’s co-founder, NBA point guard Russell Westbrook, also returns to OKC that week — in a Houston Rockets uniform. On Jan. 9, Westbrook, who is not confirmed to appear at the comedy show, will be playing his first NBA game in OKC since the Thunder traded him in July.

Though Westbrook no longer lives in OKC, Deason said he still cares about the show he helped start.

“He still supports the show,” Deason said. “He’s still working on being there. We’re still friends. We’ve still got an ultimate goal that we have in mind for impacting the city … so we’re going to keep doing everything that we do.”

Though another NBA MVP ex-Thunder player, Kevin Durant, faced boos on the court upon returning to OKC as a Golden State Warrior, Deason thinks Westbrook, if he makes an appearance at the comedy show, will receive a warmer reception.

“If he comes, you know how that looks,” Deason said. “I think they’ll respond even better because it’s one thing for people to say they’re going to do something, but it’s another thing to do it. For me and him to continue building the legacy that he started, it says a lot about his character and my character. I think people are going to really support it.”Local hip-hop artist Jabee hosts this year. Deason, who hosted the previous shows, will be performing a full comedy set.

“Originally, I came into the city to support Russell Westbrook and some of his nonprofit work, his off-the-court activities touching the city,” Deason said. “Then I started doing shows, started doing my own nonprofit work in the city, and now people recognize me for the show. But this year is really to let people know that I’m legitimately one of the best comedians to do this. I want people to know that so that next year we won’t need a headliner, we won’t need a lot of the promotion because people will know how good I am at what I do.”

Deason described this year’s headliner Will “Spank” Horton, a member of the sketch and stand-up collective The Plastic Cup Boyz, as “Kevin Hart’s right-hand man.” Horton, who started comedy in Philadelphia in 2001, was featured on Hart’s Comedy Central stand-up showcase The Next Level in 2017.

Why Not? will also features Taneshia “Just Nesh” Rice, a former Chicago social worker and another comic Hart chose to perform on The Next Level.

Deason’s brand Layups2Standup includes comedy shows and a youth basketball league. Deason, who grew up playing basketball with Westbrook, said the sport helped shape him into the person he is today.

“Basketball is the core of everything I do,” Deason said. “I made all my friends through basketball; all my tight-knit family is through basketball. Basketball taught me life lessons and put some things into my heart that I never lost … put in the work every day, believe in yourself, things like that. To have a basketball league and a brand and a nonprofit that’s all tied into basketball and helping kids achieve their dreams is very, very powerful, and it motivates me every day.”

Though a college back injury ended Deason’s NBA dreams, he said many of the skills he learned on the court carried over to the stage when started performing as a stand-up comic.

“I wasn’t the best player on my team, but I stayed in my lane,” Deason said. “I worked hard every day. I came to work, and I was in the gym all day … so now with comedy, my focus doesn’t change. I knew when I first started, I’d be doing what I’m doing now, and I know I’m going to be doing what I’m doing later already because I have the same approach — stay in the gym, stay working, stay putting in the work. If I’m working and I’ve got my head down, I’m only going to get better. My plan, my events, everything I do is just going to get better and bigger.”

The only difference in stand-up is he can’t pass the ball.

“I’ve got a team when I’m playing basketball,” Deason said. “We go out there together, strap up, playing five-on-five. My team when I’m onstage, they’re not onstage with me, so at that moment, I have to represent my team and hold it down myself. I think that’s the biggest thing is that there’s nobody else. It’s just me, so I’ve got to make sure I execute and believe in myself and have a great approach and game plan.”

Deason, according to the biography on the Layups2Standup website, “grew up in a South Central LA motel room with his mother, sister and brother and had learning difficulties so severe that sometimes he was embarrassed to speak.” After the back injury ended his basketball career, “he worked at an El Pollo Loco for three years and slept on the floor of the family’s tiny apartment” while his mother recovered from kidney problems.

While Deason has successfully mined his past for material, he said that laughter does not exclusively come from sadness.

"If you’re going through a lot, I definitely would look into maybe doing comedy because that might be your gift."
—Demetrius “Juice” Deason tweet this

“It definitely helps to feed off real-life experiences and real-life pain,” Deason said. “It definitely makes it richer. It makes it more real so people can connect to it, but at the same time, I don’t think that you’ve got to go through stuff to be funny or you have to be in pain or unhappy to be funny. I’m a very happy person, even though I went through a lot. I’m very happy. I’m very laid-back.”

However, he added, comedy is a useful outlet for people experiencing hardship.

“If you’re going through a lot, I definitely would look into maybe doing comedy because that might be your gift,” Deason said.

But for those who are still too embarrassed to speak about their difficulties, Deason wants his comedy to provide that outlet.

“I’m not even doing this for money,” Deason said. “I’m doing this to help and inspire people. For me, it’s always about helping the next person get through what they’re going through. … A lot of the stuff I do is because I know what the people that don’t have are going through and my job is to kind of be the voice for the voiceless.”