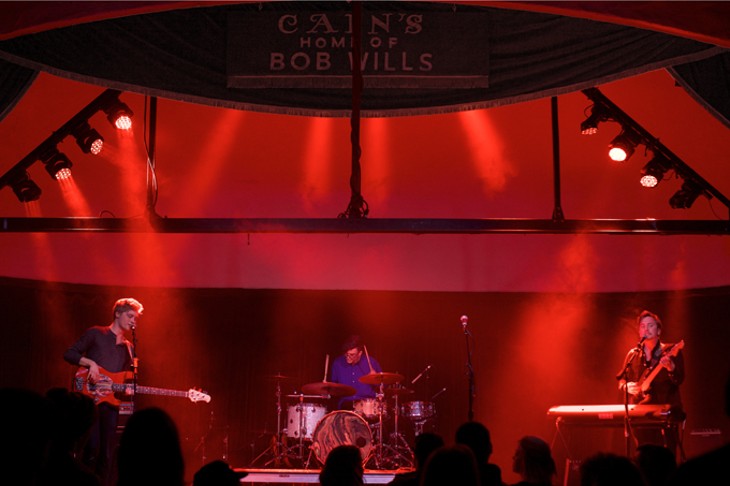 “As people and as songwriters, we try to avoid stagnation,” said Joel Parks, guitarist and lead vocalist of Ripple Green.

Those words go a long way toward explaining the band’s ambitious nature. Starting out as a young three-piece in small-town Duncan, Parks, bassist Lucas Gillette and drummer Tremaine Wade focused their thirst for adventure into traveling and creating a unique sound.

A particular interest paid to catchy hooks and fun, buoyant writing made Ripple Green’s music a perfect fit for the Britpop audiences of Europe, where the band spent six months touring in 2014. The collective experiences and perspectives gained on the other side of the world helped form the majority of new release Timepiece.

“We love to absorb everything that is happening around us and then squeeze it all out into a song or across a full project,” Parks said. “I don’t recall it ever being a conscious choice to blend our music around the culture we had been living in, but our time abroad definitely shaped us as people and, therefore, shaped our music.”

From the beginning, much of that shape has been formed by a wide range of influences, many far removed from the expected inspirations of much of Oklahoma’s current indie and psych-rock outfits. There is a more direct pop sensibility in Ripple Green’s songwriting that, coupled with the members’ desire to experiment and toy with different sounds, gives the band a wide appeal.

“As musicians, we are not ones to limit ourselves to certain genres or scenes,” Gillette said. “Rather, we tend to become attached to an artist if they are writing great songs that evoke emotion in ourselves.”

The EP’s title track highlights the urgency and spontaneity of the band’s European tour and was even recorded in England separately from the rest of the release.

“The song was written a few days before going into the studio,” Wade said, “so the recording seems to portray a more adventurous and non-confined feel, which [producer Steven Wilkinson] helped to capture.”

The remainder of the project was recorded back home at OKC’s Lunar Manor with producer Graham Colton working to capture that same kind of European energy.

“We tracked out everything at our home studio and definitely had our share of trials and errors,” Wade said, “but we dialed in our ideas so that we could focus more on getting the right tones once we got into Lunar Manor.”

Timepiece will be released through iTunes and ripplegreenmusic.com on Friday. Check out the “Timepiece” video, featuring the guys partying at Stonehenge during the Summer Solstice, online now.

Print headline: Blended colors, The members of Ripple Green go from small-town upstarts to globe-trotting adventurers with their new EP.