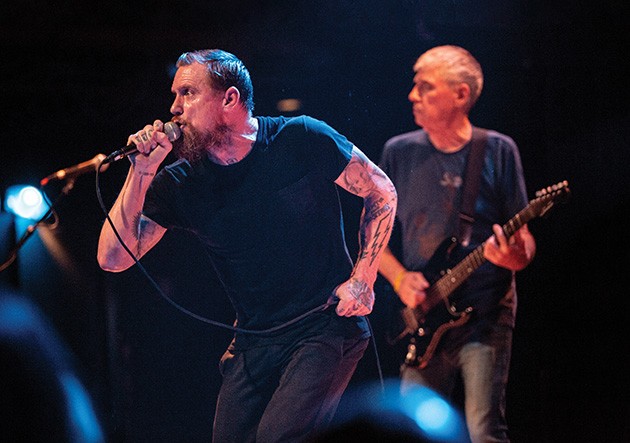 When Mike Vallely began touring as frontman of Black Flag in late 2013, he replaced former vocalist Ron Reyes mid-show following reports of inner-band conflicts and the worst-reviewed album in the seminal hardcore band’s discography. Perhaps not surprisingly, Vallely said he is enjoying the current tour more.

“Generally, it’s been a lot better on many fronts — better attendance, greater interest in what we’re doing,” Vallely said, “but also, speaking for me personally, I think I’m just better at performance, maybe more confident or more tuned-in.”

Black Flag plays 8 p.m. Jan. 16 at 89th Street – OKC, 8911 N. Western Ave. Though Henry Rollins, who fronted the band for classic albums Damaged and My War, is probably the band’s best known frontman, Black Flag has had five vocalists since its founding in 1976 — including Reyes, who fronted the band in 1981 documentary The Decline of Western Civilization, and original vocalist Keith Morris (Circle Jerks, Off!), who can be heard on 1979 debut Nervous Breakdown.

Before becoming the vocalist for Black Flack, Vallely, a professional skateboarder, fronted Mike V & the Rats and Good for You, which featured guitarist Greg Ginn, Black Flag’s primary songwriter and only continuous member. Vallely said he enjoyed his first tour with the band, but he feels more comfortable in the frontman role and “having a lot more fun with it.” Though “fun” might not be the first thing people associate with songs such as “Depression” and “Life of Pain,” Vallely said he thinks the audience is having a good time.

“I find the right moments or I do my best to find the right moments during the show to communicate that and put it across and share with it the audience,” Vallely said. “The big difference between when the band was active, say, in the early ’80s, mid-’80s, compared to now is this is a celebration of this music.”

Vallely is well aware of what Black Flag’s music means to its fans — he has been one for decades.

“There’s a history you’re dealing with; there’s a legacy,” Vallely said. “And it just so happens that this band is one of my favorite bands from when I was a young person. I saw them when I was 14. It was the first live music I ever saw. Henry Rollins was a huge inspiration and influence on me, and I mean that in the most positive way. People who have a negative viewpoint of what I’m doing or my participation in the band would just see that as sort of a strike against me, but it’s there. That’s not something I can get out from under, and that influence is very positive, very meaningful in my life. I definitely don’t consider myself an imitation or just trying to mimic what had previously occurred. … It would be just a cheap imitation if not for the fact that I lived these songs, I feel these songs, and I do bring my own essence to these songs. Maybe those are slight nuances that not everyone in the audience will pick up on, but I think people who are tuned-in do. … If you’re willing to spend a little more time and dig a little deeper, I think you’ll find that there’s a lot of things that I’m doing vocally that are fresh to the material and true to me and are alive and breathing right here, right now, in this moment. Of course, that’s a lot for me to say, but I’m confirmed every night by the reaction we get from audiences.”

Performing the songs he loves onstage night after night has given them a new significance.

“Once you know a song, perform the song, live with the song, you’re always finding other levels to it, other depths,” Vallely said. “Great music continues to unfold, continues to be expansive and continues to inform. … It’s different every night from song to song, but every night, there’s usually a moment or two where I just really can connect on a greater level to a particular song and find a meaning that maybe isn’t something I could intellectually articulate, but emotionally or physically, it comes out in the performance. … It’s always an adventure.”

In a 2013 LA Weekly column, Rollins wrote that he would not play “old music” because his “future is getting in the way of [his] past” and he has “moved on in search of new battles.” Vallely said Black Flag’s music is still finding relevance with fans, new and old.

“The music and the band become very generational,” Vallely said. “We see a lot of audiences that are fathers and sons, families, that kind of thing. There’s a great interest. The songs live on. The music is a big part of young people’s lives today like it was for me when I was 14. … People see what they want to see in that kind of stuff — ‘Oh it’s just for the money,’ or, ‘What’s the point?’ — everyone’s got an opinion, but this is Greg’s music. He still greatly values it and cares about it and still loves playing it and would like to share it with people. Is he interested in going backwards and doing a reunion tour with old band members? Not likely, but does he feel that there’s an opportunity to play the old songs and somehow make it expansive and move it forward in some way, even if it’s just old material? I think he does or he wouldn’t be doing it.”