Nick Offerman embraces his status as a true comedian on his All Rise tour. 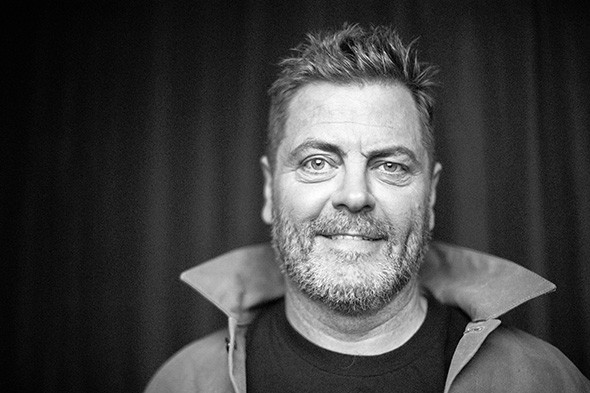 After two national tours, a Netflix special and seven seasons on one of the 21st century’s best-loved sitcoms, Nick Offerman is ready to consider himself a comedian.

“I’m not one to toot my own horn, and especially in the realm of comedy, which I’m relatively new to,” Offerman said. “I’m a trained theater actor, and only a few years into Parks and Recreation did I begin touring as what I then called a humorist. And that was mainly out of insecurity. Colleges began inviting me to come perform my standup, and I said, ‘Oh, I’m not a standup, you guys, I’m a theater actor, but I want to come talk to 2,000 college kids, so let me take a swing at this.’ I could tell that I would make people laugh. It went very well, and my two previous tours have been successful, wildly beyond my dreams, but I definitely had some insecurity. I didn’t want people to call me a comedian because I was like, ‘I’m not that funny.’ This time, I finally decided to own it and say, ‘You know what? I’m going to try and make the leap from humorist to comedian.’ And so with that in mind, I still don’t know what other comedians say about their shows, but I trust my audience to know that we’re going to have a blast.”

Offerman, known for memorable roles in the TV series Fargo and Parks and Recreation, performs 7 p.m. Sept. 29 at The Criterion, 500 E. Sheridan Drive. Promotional materials for his latest tour, All Rise, call it a “public gathering” and promise it will compel you to chuckle whilst enjoining you to brandish a better side of humanity than the one to which we have grown accustomed.”

“My favorite parts of the show are these hilarious songs that I wrote and perform on a guitar,” Offerman said. “They have proven to be top-notch laughter-delivery systems. I sort of get people busting their guts laughing with my songs and my speechifying, and then I give them a little rest with some light dance moves as sort of a palate cleanser before we dive back into the underbelly of humanity.”

With All Rise, Offerman hopes to explore modern sociopolitical issues without “devolving to soapbox preaching.”

“Our society is full of rancor,” Offerman said. “Everybody is screaming at somebody about something, and what occurred to me is the easiest thing to do would be to go on stage and pluck the low-hanging fruit. Really, on any given day, I could just take the newspaper onstage and say, ‘Here’s what the criminals in the White House did this time,’ but I don’t think that that’s helping anything. I think that’s just reinforcing the rancor.”

Offerman would rather find humor in the common human traits that lead us to this moment in history and hope we can do better in the future.

“My favorite parts of the show are these hilarious songs that I wrote and perform on a guitar.” — Nick Offerman tweet this

“What I’m trying to do instead is make fun of all of us because if you think about it, if you take a small step back, we’ve all chosen this,” Offerman said. “We’re all doing this to ourselves. We’re ostensibly in a democracy, and we all are OK enough with the state of things that we’re not in the streets. We’re not, like, waving torches on the Mall at the Washington Monument. We’re all going to work and saying, ‘I really wish our politicians weren’t so racist. Anyway, what are we having for lunch today?’ So it’s making fun of the aspects of humanity that have brought us to this place and, hopefully, sort of subliminally encouraging us to where we can improve ourselves to not be as funny going forward.”

Offerman said his approach has proven popular on previous tours American Ham and Full Bush — with most of the audience, at least.

“Ninety-six percent of people laughed their asses off and had a blast,” Offerman said. “Four percent of the people got up and walked out because I suggested, perhaps, it’s hard to for me to buy you as pro-life when you’re also so pro-death-penalty — something that offended their tender sensibilities.” 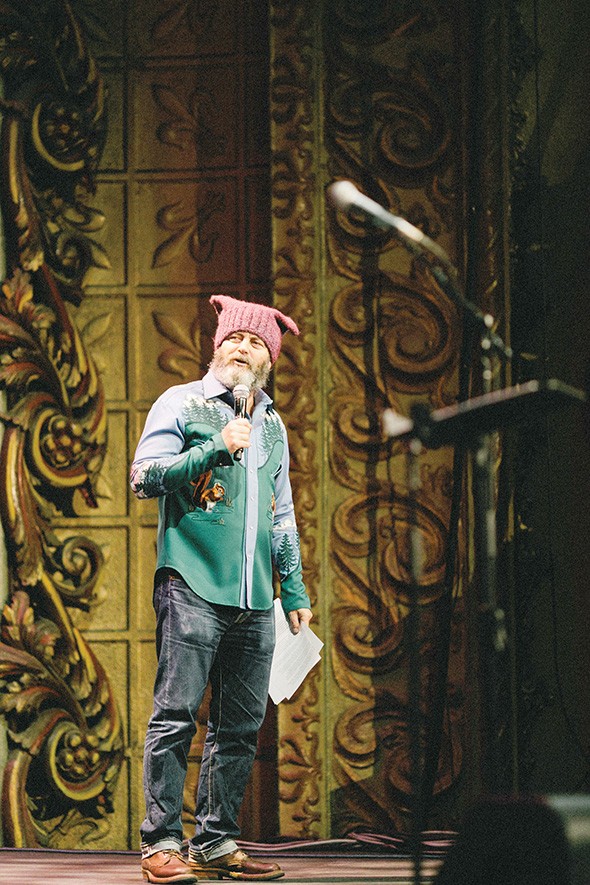 While his actual beliefs might seem at odds at times with libertarian Übermensch Ron Swanson, his popular Parks and Recreation character, Offerman said there’s more depth to Swanson than many people realize initially.

“Ron Swanson is kind of a Trojan horse for open-mindedness and feminism and empathy,” Offerman said. “Here’s this masculine guy who, traditionally, he’s supposed to be a misogynist, and he’s supposed to be bottled up and unfeeling and taciturn, but by using the crowbar of Leslie Knope to sort of pry him open for the audience, we’re like, ‘Oh, you can be a lumberjack who chops his own firewood and also love people and care about everybody and be empathetic.’”

Swanson’s love of woodworking, scotch and having sex with Megan Mullally — Offerman’s real-life wife who collaborated with him on Summer of 69: No Apostrophe, a book and stage show about their love life, and also portrays Swanson’s ex Tammy on Parks and Recreation — are based on Offerman’s actual personality and interests. Though he never tries to be Swanson onstage, the similarities are still obvious.

“I think Ron Swanson became the way he was partly because of the way I am. I sort of purposefully don’t include any Parks and Rec or Ron Swanson-isms in my touring because I feel like that would be cheap and insincere, but it’s funny,” Offerman said. “People often say things to me like, ‘You often sound a lot like Ron Swanson.’ And I say, ‘Well, it’s the same instrument.’ I’m performing language for you, and I’m also, I daresay, a simple person. I’m a man of few words. I don’t suffer fools gladly. I’m plainspoken, and so, naturally, there will be bleeding of those perceptions. But I think the main difference is that the Parks and Recreation writers are much more brilliant and talented than I am.”

The character’s popularity has given Offerman the freedom to create stage shows that better suit his actual personality than traditional standup comedy might.

“Parks and Recreation definitely opened the door to allow me to be perceived as someone who can entertain you maybe in a Garrison Keillor sort of fashion, talking about your choice of work boots or what have you,” Offerman said.

He is happy about the response his new tour is getting and excited to bring it to Oklahoma City.

“I love Oklahoma,” Offerman said. “It’s become my second hometown. My wife grew up in Nichols Hills, so for 20 years now, I’ve been watching Oklahoma grow and sort of blossom. I fell in love with it immediately. There was sort of a dusty charm, and you can sense the former heyday of the oil industry in town and perhaps the cattle industry before that, but since I’ve been there, seeing the restaurants and theaters and bookstores and culture develop, I really am crazy about it. As a farm boy from central Illinois, I never dreamed that I would feel a sense of coming home to perform a show in Oklahoma, and that, in fact, is exactly how I feel, so I’m very grateful that a weirdo like me can draw a crowd there. And I’m looking forward to making everybody laugh and then maybe getting a frankfurter from Johnnie’s.”