The arrest of a former Paycom employee for threatening coworkers and police officers leaves employers and community leaders looking for answers.

Leadership at Paycom, a national human resource technology provider based in Oklahoma City and ranked a top employer by Oklahoma City Chamber of Commerce, has suspicions over how Oklahoma City Police Department (OKCPD) handled the arrest of one of its officers’ family members earlier this year.

Blake Wright, 22, was a Paycom employee in 2017 and was arrested in May for threatening violent acts against his Paycom coworkers after his termination from the company this past March, according to an arrest warrant. 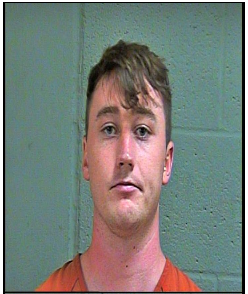 Wright made multiple threats to Paycom employees this past spring through social media, over text messages and through emails, said Paycom spokeswoman Kristen Sharkey.

At least one employee filed a protective order against Wright, according to police records.

“The threats have been neutralized, but we want this to remain on the radar of the police department, the city council and the mayor,” Sharkey said.

Wright is currently in the Oklahoma County Jail and has a court date scheduled this month.

“In light of the recent violence involving schools, religious institutions, restaurants and workplaces locally and nationally, the passive approach and lack of action to this point is abhorrent,” Paque said in the letter. “It is clear that the city manager and police chief have ignored our multiple requests for investigation.”

One question posed is why a victim who sought counsel from OKCPD detectives on how to file for a protective order against Wright reported feeling intimidated by detectives. Another question asks what specific actions were taken to assess Wright and the possibility that he might be a threat to society.

“We take every kind of threat very seriously,” OKCPD spokesman Gary Knight said. “If the victim in this case seemed off-put by detectives at the police department when inquiring about a restraining order, it was likely because detectives might have been taken aback by the request. A restraining order is requested through the court system, not the police department. I am sure though that detectives conveyed this to the victim.”

Validation requests listed in the letter include a “copy of protocol when the suspect is a member of or is related to a member of the OCPD,” and “a copy of the city and OCPD’s threat assessment tool currently in use.”

Knight said the notion that the department would hold anyone above the law is inaccurate. According to a second arrest warrant, Wright was arrested a second time for making threats to members of OKCPD and their families.

“He was arrested, he was charged and he is going to court,” Knight said. “What more could we do?”

Wright’s mother, Stacy Wright, said her son is a far cry from a threat to society.

“He was upset, and he acted out of impulse and out of frustration,” Wright said. “But he’s just a kid and all of this is quite frankly too much for anyone to handle.”

Wright said her husband, Blake Wright’s father, is an Oklahoma City police officer who has endured his fair share of threats from community members after news about his son’s arrest went public.

“‘See something, say something’ needs to mean something.” — Matthew Paque tweet this

What Paycom failed to mention, she said, is that the reasoning for her son’s employment severance related to him being away from work and at military training. Blake Wright is a member of the Army National Guard, according to his police warrant.

“This ordeal has devastated him,” Wright said. “He’s just a kid. He has his whole life ahead of him, and I don’t want his life ruined because of this.”

If Paycom, Oklahoma City and the OKCPD want to create positive changes out of this ordeal, Wright said, she hopes those changes will include a future for her son.

In his letter to Holt, Paque said Paycom leaders have some ideas of what additional actions city officials and the police department can take to ensure that metro work environments remain safe.

Paycom leaders would also like to see the “creation and utilization of a crisis intervention team within the OCPD to assist in cases involving mentally ill and/or suicidal citizens.”

“I have personally met with the leadership at Paycom, have spoken to representatives several times this week and have at least one more upcoming meeting already scheduled,” Holt said. “I know that I speak for the council and law enforcement when I say that we are prepared to address Paycom’s concerns, just as we would any citizen or employer in our city.  We treat all public safety issues with the utmost seriousness.”

Holt said he is open to collaborating with the company in ways that can produce possible additions to city and police policies.

“We’re all going to have to pool our best ideas in order to minimize the probability that workplace threats become active shooter situations. We all need to think about prevention and planning, and I appreciate you raising these issues,” Holt wrote in a letter addressed to Paycom leaders on July 30. “We would be interested in having further conversations to evaluate any future threat assessment tools that may improve our ability to respond to threats in our community. We will also be exploring best practices in this area from a law enforcement perspective. We’re not the only community facing this issue and we will continue to reach out to other cities and organizations for best practices.”

Aside from echoing the national anti-terrorism “see something, say something” slogan, OKCPD, along with other police departments in the state, currently has few methods for preventing workplace, school or public place acts of violence.

“See something, say something’ needs to mean something,” Paque said in Paycom’s letter to the mayor. “Under the current leadership in Oklahoma City, it does not. Until it does, lives are at risk.”