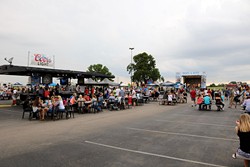 The free, family-friendly street festival closes out this year’s successful season 6 p.m. Aug. 12 in the west parking lot of Riverwind Casino, 1544 State Highway 9, in Norman with close to 30 food trucks and a gig by country- and Southern-rock act Confederate Railroad.

The event also features games and activities for the kids.

“Hopefully they’ll see that Riverwind is not just about the casino, but that we are also bringing in something for the community,” Link said.

So Beats & Bites was born as an event that appeals to Norman and the surrounding community, and organizers said they found inspiration in the success of music and food events like Midtown’s Eats on 8th and Edmond’s Heard on Hurd.

Beats & Bites has grown from around 2,000 guests at last year’s events to at least 4,000 at each of this year’s events, Link said, and welcomed almost 8,000 to Riverwind’s July event.

Each hosts a minimum of 18 trucks, but the August event tops out the list with nearly 30.

Vendors apply online and Riverwind vets them on a first-come, first-served basis, researching reviews and talking to others in the local food truck industry to ensure that everyone selected has a good reputation.

When choosing headlining music acts, Riverwind considered what genres and styles appealed to the kind of diverse, family-friendly crowd it wanted to attract.

“We found that a country, red dirt, kind of new-age country sound was popular,” Link said.

August’s headliner, Confederate Railroad, formed in the 1980s in Georgia and spent several years backing acts like David Allan Coe and Johnny Paycheck before breaking through and signing to Atlantic Records in the early ’90s. It has also charted more 18 hits on Billboard’s Hot Country Songs chart, including “Queen of Memphis,” “Jesus and Mama,” “Trashy Women” and “Daddy Never Was the Cadillac Kind.”

It released its most recent album, Lucky to Be Alive, last year. Opening for Confederate Railroad is dance band Time Machine. 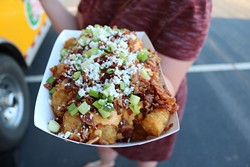 The event also features activities designed specifically for kids, including games and inflatables.

The Goldsby Fire Department will visit, inviting children to dress up in firefighter gear and tour the fire trucks, and local police officers will be on hand to perform fingerprinting.

The event’s popularity has been so great that guests bring their own lawn chairs — while the casino sets out about 600 seats and picnic tables, they don’t fully accommodate ever-growing crowds. Guests also can bring umbrellas for shade.

Food trucks set up early for anyone who wants to grab a bite before the music starts.

“We are excited to have one final opportunity this summer to bring the community together to enjoy great food and great music at Riverwind,” casino general manager Jack Parkinson said in a media statement.

The casino itself is open for anyone over age 18. Pets and outside food and beverages are not permitted at the festival.