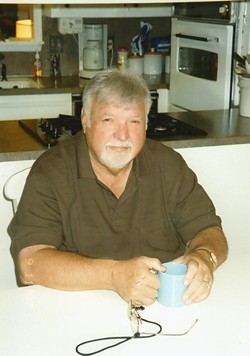 Alan Bailey’s father, Finis “Tony” Bailey, died from lymphoma in 2012. The loss spurred Bailey into action, and he subsequently created Rock Out Cancer, an annual fundraiser for cancer research.

“It just inspired me and my family to do something to try to fund cancer research,” Bailey said.

Bailey, a vocalist in the band Brown Note, shared a love of music with his father.

“He was always really supportive of anything I wanted to do musically. He taught me how to play,” he said. “He was always my biggest fan.”

He merged his musical passions with his desire to help find a cure for cancer when planning the inaugural Rock Out Cancer event.

“The first thing I did was ask some of my musician friends, and the response was just really amazing,” Bailey said. “It seems like everybody else had also lost somebody from cancer or knew somebody who had cancer.”

Over the past three years, Rock Out Cancer has grown in size and scope. Bailey said that six or seven bands participated the first year. The event continued to expand. 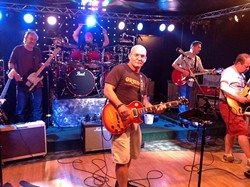 “I added two bands this year. I actually had to turn down like three more,” he said.

According to Bailey, Jim Spalding, lead singer of Blind Date — a band that has played Rock Out Cancer the previous two years — suggested he add a 5K race to the event. Bailey agreed, and Spalding took on the responsibilities for the race.

Rock Out Cancer III features music from nine bands, a 5K run and a silent auction. All proceeds benefit the nonprofit organization Stand Up to Cancer. Bailey chose the organization for its positive financial reputation.

“Some of the older, [more] established cancer charities — they’re really not that great, as far as administration costs instead of actual research,” Bailey said.

The first and second Rock Out Cancer events generated about $3,000 each for cancer research. Money raised from event T-shirt sales also goes to Stand Up to Cancer.

“Raising a family, you don’t always have a lot of extra money to donate to charities, and this really gives us an opportunity to make a difference,” Bailey said. “It makes us feel like we’re doing something.”

He did most of the planning for the first year’s events, along with help from friends and family. He credited his mother as being supportive of both his musical career and Rock Out Cancer.

“My mom is the number one bookkeeper, and she runs all the auctions during the concerts when I’m helping out with the bands and also performing,” said Bailey.

Although the community has been largely supportive, Bailey also mentioned naysayers. Some have complained about the Rock Out Cancer events being held in clubs, where smoking is allowed.

For Bailey, the choice to hold Rock Out Cancer III in a club is practical.

This year’s Rock Out Cancer III event is July 16 at The Landing Zone, 8720 SE 15th St., in Midwest City. Bailey said he and other volunteers will begin setting up for the 5K at 7 a.m., the run begins at 9 a.m. and bands start playing at 4 p.m. Doors to the silent auction open at 3 p.m., and it continues until right before the last band performs. The Facebook page Rock Out Cancer III offers more information.

With Rock Out Cancer III, Alan Bailey pays tribute to his father through music while continuing to help the fight against cancer.

“I’m always amazed at how much people want to help,” Bailey said.

Print headline: Musical memorial, An Oklahoma man continues his father’s legacy through a concert and a commitment to Rock Out Cancer.