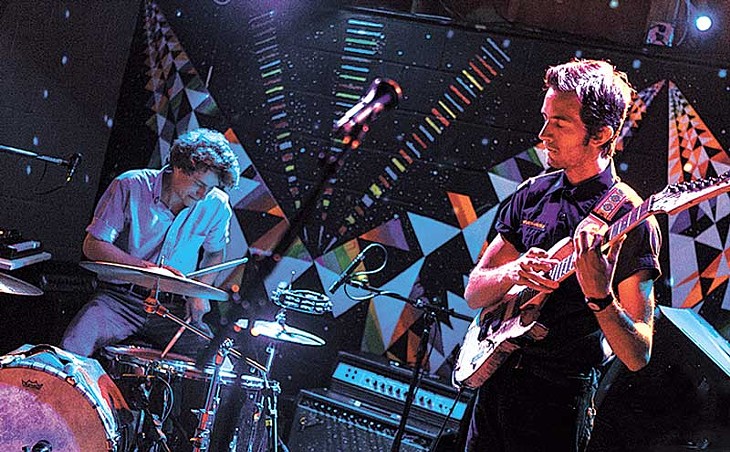 Chipper Jones with The Hitt Boyz,

Austin indie duo Chipper Jones is little more than a year old, but the musical collaboration has been a lifetime in the making.

Guitarist James Lambrecht and drummer Charlie Martin grew up on the same block in their hometown of Dallas, one that Martin describes as an “old-school, romantic kind of upbringing” where all the families become more than neighbors — a tight-knit community. Their families were friends, as were Lambrecht and Martin, if not exceptionally close. But when Lambrecht’s family shipped down to Austin, the relationship seemed dead.

The two would bump into each other again a decade later at the University of Texas and continued to do so, as their friends and musical exploits overlapped at venues and bars around Austin.

Eventually, the childhood buds decided to accept their destiny and jam together.

“We met up and played together and just hit it off immediately,” Martin said. “We landed on such similar interests but different aspects thereof. It made for this perfect partnership.”

As friends and bandmates, they are more of an odd couple than identical twins. The two share a similar background and affinity for organic electronic music and post-rock, and each one’s approach is different yet complementary.

“What he does is very technical, this layered looping and very precise, intricate style of playing. I’m more primal and minimal, this sort of tropical influence,”

Martin said. “That’s the sound we started to cultivate — making something that is accessible but could be seen as more leftfield. The words math rock and post-rock get thrown around, but it’s a different kind of balance.”

It makes for a sound that is wholly familiar but, arguably, unique to Chipper Jones, blending sweeping instrumentals with the lush, forest-floor bounce of Youth Lagoon.

The best comparison might be to fellow Austin act Explosions in the Sky. But while Explosions drew its sound out of the dramatic, football-filled Texas nights (as heard in Friday Night Lights — both the movie and TV show), Chipper Jones is informed by a different sport. Martin played a season of college baseball and has a stepbrother playing for the Detroit Tigers’ Triple-A affiliate. He’s also good friends with Atlanta Braves catcher Evan Gattis, explaining the band playfully being named after the retired, MVP-winning Braves third baseman.

“I was never that into him as a player, but I loved that name,” Martin said. “James had this romantic idea of Chipper Jones being this all-American type of guy, and we have always been influenced by Explosions in the Sky, so there was this great kind of parallelism there.”

That connection can be heard on Two Rooms, the duo’s debut EP featuring a few singles, a collection of improvised interludes and a soundscape all tracked live and released in April.

“It’s a different thing for a band like us to do,” Martin said, noting the next album would be a standard, multitrack recording. “You’d expect a folk band to put out a live album, but maybe not so much an instrumental pop group. And we like doing things differently.”