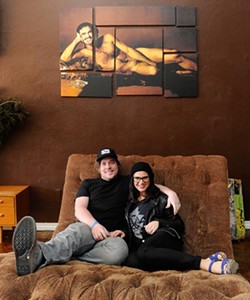 Buy a lottery ticket and you’ll have a better chance of winning than you will ending up like Anna and Drew Mains.

Owners, in full or part, of In the Raw Sushi, 200 S. Oklahoma Ave.; Knucks Wheelhouse, 103 E. California Ave.; and Rockford Cocktail Den, 317 NW 23rd St., the Mains are living proof that being in the right place at the right time — and having the right skills — can change everything.

Inside Rockford, the semi-opulent, chic, 1970s-themed cocktail bar, they are the picture of people with full plates. A few years ago, they were just bartenders at In the Raw, the Bricktown sushi joint where they met and fell in love.

How they ended up there is another story altogether — one that runs through Little Rock, Kansas City, several Outback Steakhouses, firefighter training school and the Waterford Marriott — but suffice it to say that was where fate seemingly intervened.

Drew should have found another job. Previous iterations of In the Raw were failures, and the restaurant staff wasn’t getting paid.

But he stuck it out long enough to overhear a conversation that changed everything. The bank was about to start repossessing the restaurant’s assets. A new owner was needed if it was going to stay in business.

The Mains decided, with enough management experience behind them, to step up.

The first few months after taking over in October 2012 were rough. Attempts to switch to a more traditional Japanese menu that focused on exotic fish and sashimi were met with indifference.

“We threw away a lot of fish,” Anna said. “[Today,] our sushi chef, Ashley, really has a finger on what area and what the people want.”

They focused instead on doing American-style sushi — fried rolls, lots of sauces and cooked, as well as raw, ingredients — with a commitment to using quality fish. There’s a difference between pandering and giving the diners what they want.

Slowly but surely, they rebuilt In the Raw’s customer base and drew the attention of other business owners.

One of those were the owners of Brewer Entertainment Incorporated, which owns and operates Chevy Bricktown Events Center. They had planned to open a pizza place along the canal, but the restaurant never came to fruition. Seeing the magic the Mains worked on In the Raw, they decided to approach them about taking over the other location.

And that’s how Knucks Wheelhouse was born. Again, their initial idea had been for wood-fired ovens, but that’s not what the space was built for, Anna said. Instead, they thought about the area and what the Bricktown district really needed.

“We thought it should be a Sixth Street-type place, [like in Austin, Texas],” she said. “It’s a walkable district, so why not do big slices of hand-tossed pizza?”

Drew experimented with different types of cheese and doughs, eventually settling on one that uses COOP Ale Works’ Native Amber in it. Oh, and somewhere in there, they found out they were pregnant.

So how did the owner of two restaurants — and a 15-month-old baby — get into the bar business? Playboy magazine.

When Grandads closed, the co-owner was looking for someone to help make the prime 23rd Street location work. Right place, right time? He met the Mains at a party and floated the idea to them.

“We had the idea that would become Rockford a few Christmases ago,” Drew said. “We got a stack of 1970s Playboys in a game of Dirty Santa. About the same time, [Anna] had gotten into the craft cocktail scene.”

They wanted a place that was comfortable, a little swanky, a little laid-back and not too kitschy, aka Rockford.

How two overworked parents will survive running a mini-empire isn’t assured. But they’ve been lucky so far, right?

Print headline: Unlikely moguls, The right place and the right time have been instrumental to Drew and Anna Mains’ success.