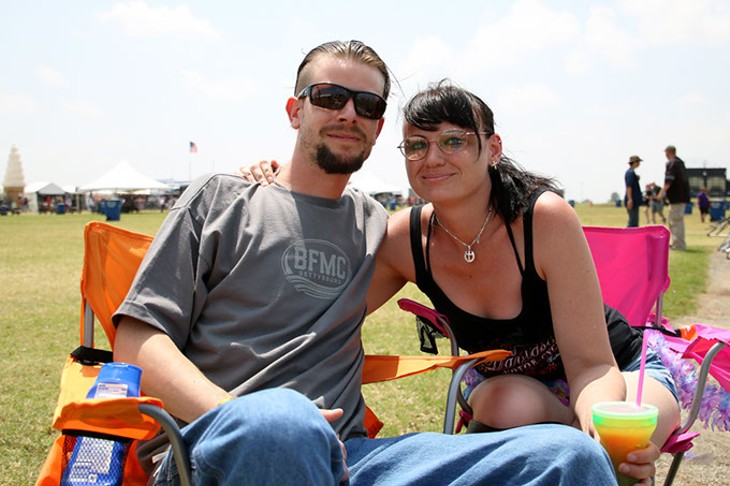 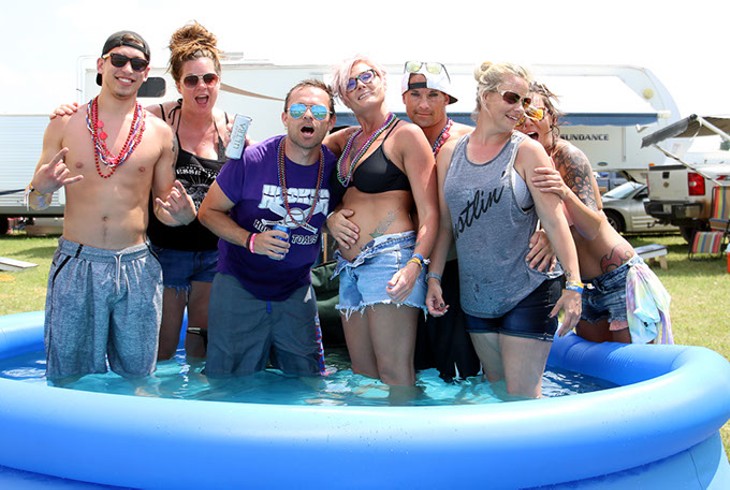 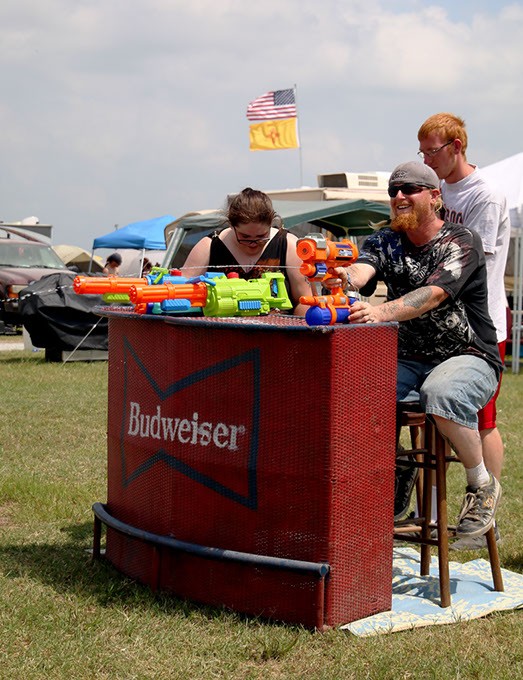 Attendees were diverse, ranging from tweens to seniors, but all had at least one thing in common: the love of rock and roll. Shouldn’t that be enough reason for anyone to get together?

Bryan Johnson, a teacher from Hooker, has attended the festival since the beginning and managed to score the same camping spot for the past 10 years.

“It’s about the entire experience,” he said. “It’s just nice to get to come and be around a group of like-minded individuals.”

The Rocklahoma experience consists of three days filled with music, camping, and just having a good time. This year, about 25,000 people were in attendance each day of the festival, despite weather problems that caused delays and cancellations.

Campers staked their claim of campsites with flags depicting anything from their self-assigned campground name — one very proudly proclaiming, “Camp show your boobs” — to Iron Maiden’s mascot Eddie. The campgrounds were filled with tents, RVs and partiers lounging in inflatable pools, drinking, laughing and enjoying one another’s company.

Wallace has been attending the event since its 2007 inception, and the culture and people he has experienced hold a special place in his heart. He and his wife Wendee married at Rocklahoma two years ago, providing free beer and inviting festival campers to join in the celebration.

“One of our friends got ordained and licensed to marry us here,” Wallace said. “We invited all the campers. My father-in-law came. He’s 70.”

As Rocklahoma tradition and Oklahoma climate seems to dictate, weather again became a major issue at this year’s festival. Thunderstorms ravaged Mayes County Saturday evening, and sets by Live, Stone Sour, Diamond Head and Suicidal Tendencies were canceled, bringing Rocklahoma to a halt for the night. Festivalgoers were told to head back to the campgrounds and stay “safe and alert.” But the weather didn’t curb the event’s party atmosphere.

“It’s a great experience,” concertgoer Shantell Barnes said. “It just sucks that last night was cancelled for storms that took over two hours to get here, and then it took them 20 minutes to update any of the stuff on what was going on.”

The show was set to go on with tweaks to the original schedule on Sunday, but Rocklahoma organizers were faced with another hurdle to jump: a power outage caused by a bird flying into the phase that provided power to the town of Pryor, including the festival grounds. Power was restored by 6 p.m. and the show went on. Ratt performed at 6:50 p.m. and The Offspring closed out Rocklahoma 2017 early Monday morning.

Rocklahoma released a final statement about the cancellations due to weather on its official website.

“Please know that we are working diligently on a plan to take care of our loyal fans, and we hope to have the details to present to all of you in the coming week,” the statement read. “Please stay tuned for those announcements.”