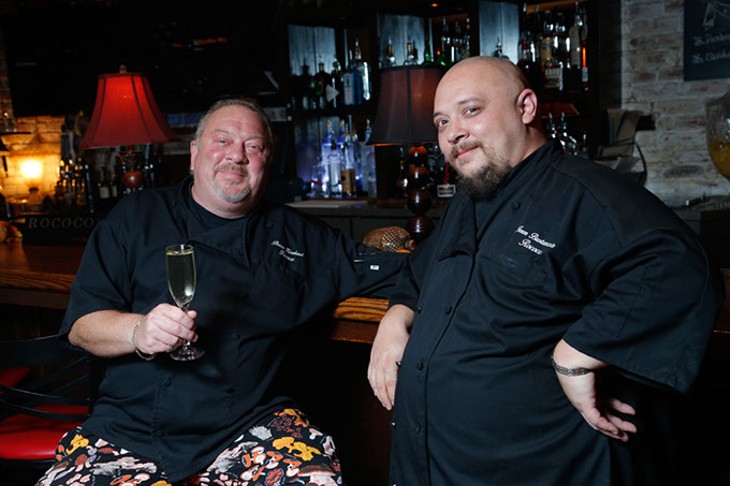 Over the last 12 years, the Rococo menu evolved as chef Bruce Rinehart honed his ideas of East Coast-style fine dining.

In 2017, they’re planning massive revisions to the restaurants’ fan-favorite menu.

It’s a season of change for both the original venue at 2824 N. Pennsylvania Ave. and the larger second location at 12252 N. May Ave. Rinehart recently parted ways with chef Josh Partain after working together eight years, and Rinehart and Bustamante are planning a new bar concept, The Manhattan, which is expected to open sometime in 2017 at 210 Park Ave., Suite 150.

Rococo won’t deprive guests of the restaurant’s famous crabcakes or Bruce’s Love Salad for Two, which marries a classic iceberg lettuce salad with an antipasto plate of Italian cheese and meats. But when he began asking customers about potential changes, he found them surprisingly willing to reply.

“I was talking to a guy, and told him I was thinking about taking an item off the menu that he enjoys,” Rinehart said. “And he said, ‘I’m not going to stop coming in here just because you take that dish off.’”

Anyone who visits either location knows the owners take a personal approach with diners, and Rinehart and Bustamante have been exploring how to best introduce new items and pare down menus without alienating loyal customers.

“We’re passionate about people,” Rinehart said, “but we have finally come to a place where Rococo will still be Rococo” if the menus begin to diverge.

That means the Northpark and Penn locations will grow into their own identities, yet remain bonded by philosophy and a select core of menu items.

“Way back in the day, when I opened Northpark, I wanted a smaller menu that included sides to pair them with center-of-the-plate items,” Rinehart explained. “Looking back, I wish I had done that. And now we can.”

He said the pair will explore seasonal menu selections with more “straightforward flavors.”

“A lot of the New England flair will stay, and our seafood is still a big focus that’s important to us,” Rinehart said.

Everything that could delay The Manhattan’s opening has, he said. Bar construction is at least a month behind schedule. Though the slow pace of progress is frustrating, Rinehart still eagerly discusses the new concept, which he plans to open in early 2017.

“The place is going to be wicked sexy,” he said.

The Manhattan is going in at the base of Oklahoma Tower, and the bar’s signature drink will be the potent cocktail for which it is named, a favorite of partner Ted Streuli, editor of The Journal Record.

“We had two concepts we wanted to do,” Rinehart said. “He’s from San Francisco, and I’m from back east, so it’s kind of an East Coast vs. West Coast thing.”

But all of it revolves around the drink, with tiered Manhattan offerings with varieties of vermouths, ryes and Bordeaux cherries.

As he does at Rococo, Rinehart said he will take his cues from his customers, start with a small menu and see how they respond to daily features.

“We’re really catering to the neighborhood, with some cool salads and panini,” he said. “And we’ll grow it with our guests’ tastes in mind.”

One issue at The Manhattan is the bar doesn’t have a gas range, which he said just makes cooking a more creative process.