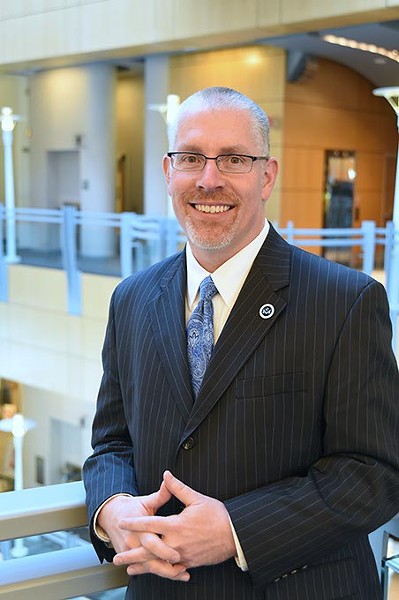 As a boy in Buffalo, New York, Tim Rogers watched broadcasts of the Toronto Blue Jays that played on Canadian television and reached American homes just on the other side of Lake Ontario.

He also had an affinity for the Los Angeles Dodgers — his mother’s influence — and the Kansas City Royals, his adopted home team after living in Kansas City, where he was director of operations for the Johnson County Library system.

“I just love being at the ballpark,” Rogers said.

Following completion of his Master in Library Science degree at Indiana University, Rogers landed a job at the Baseball Hall of Fame in Cooperstown, New York. It was a dream gig for a baseball junkie, and his claim to fame is a credit on some of the popular 1994 Baseball documentaries by Ken Burns, as he helped pull photos of baseball figures discussed in the film.

Last week, Rogers began his new job as executive director of Oklahoma County’s Metropolitan Library System, working in an industry that shares many similarities with baseball. There are many who view baseball and libraries as proud American institutions past their prime, and both have had to find new ways to compete in an ever-growing entertainment landscape.

However, while baseball can charge $50 for a ticket and $7 for a hot dog, libraries continue to offer their services for free, even though taxpayer revenue can be challenged and new content platforms limit the life of digital content in stricter ways than physical books.

“In many cases, people do think their better days are behind them, but I do think that for both, there are huge opportunities,” Rogers said about baseball and libraries.

The new director of the state’s largest library system won’t have any say on how baseball moves forward, but he will help cast a vision for the local library as it adapts to a new world of digital content and connectivity.

Rogers, who previously served as director of NC Live, a consortium of North Carolina libraries, said he believes the library should be a place that partners with the community in an effort to help it achieve goals. That includes serving as a launching pad for new business.

“We can be a resource for regular people who want to start a business,” Rogers said. “That new business has to get a start someplace, and most people don’t know how to start. Libraries actually have the information, and I’m not just talking about books. I’m talking about the people who can help them get to the next level.”

Rogers is also excited about tailoring the library’s resources and equipment to the specific needs of local industry and neighborhoods. For example, some libraries across the country offer access to 3D printers and other emerging technology that would normally be out of reach for average citizens.

“That by itself is kind of hollow because it allows [people] to use it but doesn’t address any kind of local need,” Rogers said. “For example, the business community may need kids to become engineers, and the best way to get kids interested is to show them the things engineers might use in practice. It has to be tied to something else. It has to be that we are trying to solve a real community need.”

Rogers also sees a role for libraries to help organize the growing amount of data being produced by different organizations and government entities.

“Libraries have become much more involved in the documentation of a local community and not just local history,” Rogers said.

As data sets, mapping and other aspects of smart cities continue to increase, Rogers envisions the library as a place where that research can be organized together to provide holistic tools to residents and other researchers in an effort to better understand the city.

Of course, Rogers also realizes his role as a library director is to continue leading MLS through the evolving digital world in which the way content is delivered and purchased continues to change as physical books make way for downloads. That will be a part of the creation of a new strategic plan that Rogers will oversee throughout the next year.

“I’ve been on the job for four days,” Rogers said last week. “So it would be really presumptuous for me to say, ‘Here is what we should do.’ When I was hired, I was asked to join this organization, which is already performing very well.”

In an interview about his baseball documentary, Burns said the “star of the film is the resiliency of the game of baseball.” Resiliency for baseball has meant adapting to new societal interests, new technology and new cultures. For libraries, resiliency has also been a dominant theme throughout its own history.

“Baseball has expanded to new cultures and is better than ever before, and libraries should do the same thing,” Rogers said. “It’s not that we shouldn’t do what we have always done, but we should take our success and build on.”