Former roadie Tommy Gragg is now the owner of Red Dirt Labs, which produces a wide variety of cannabis products.

Tommy Gragg traded a life on the road for a life in the lab. The former rock ’n’ roll roadie opened Red Dirt Labs, a processing facility that specializes in THC and CBD vape cartridges and tinctures in varying ratios.

Conveniently enough, each of the products in the Red Dirt Labs line are named after the moods and feelings they prompt.

The Goodnight, which comes as both a vape cartridge and a tincture, boasts of 5-7 percent CBN, or cannabinol, which is most commonly found in aged or light-exposed cannabis. It is one of the lesser-known cannabinoids, and many users report that higher percentages of it act as a sleep aid.

The names are intentionally simple and direct, Gragg said.

“We realize the market here is a lot of people that are new to cannabis, especially in Oklahoma, and they’re just soccer moms and grandmas,” he said.

Gragg said he has seen the dramatic differences in patient reactions even over the course of a two-day period. He gave his wife a cartridge with 17 percent THC, which she absolutely loved. The next day, he gave her one that was 77 percent and she was on the moon.

“That’s the thing; it is a trial and error process,” said Red Dirt Labs sales director Trish Hill. “It’s really crazy to me because our individual tolerances are subjective. People have negative experiences with cannabis, and if it’s a negative first experience, they’re less likely to come back and try to figure out or titrate the medicine that they need. So when we provide ratio products, it’s a little bit more of like dipping your toe into the pool and understanding your tolerances, and you’re still getting these amazing, full-spectrum health benefits from the CBD, from the entourage effect of the THC and the CBD bolstering one another. But you’re allowing people who have no real concept of how this chemical works in their body and who are trying it themselves and who are responsible for their own doses, you’re empowering them by giving them options.”

The low and slow dosing method also helps people who are new to medical cannabis from unintentionally setting high tolerances to cannabis from the beginning.

“We have to consider the fact that there are people with chronic conditions who aren’t in a space where they can take tolerance breaks,” Hill said. “They need consistent medicine and their tolerances are going to build, so we have to create a diversified product line. We don’t want to throw them into the deep end and then have them blast their tolerances up from there. There’s cannabis medicine that will be accessible to them and that will work for them, but they might not necessarily know because they’re getting blasted with this high-potency stuff that longer standing industries have kind of dictated.”

However, the High and the Happy (with 70 to 80 percent THC) vape cartridges are still the bestselling products, Gragg said.

“People are still just looking for the high,” he said. “But Goodnight’s real popular, and in tinctures, Goodnight and the 10 to 1 are very popular. There’s a lot of people that like the 10 to 1.”

That 10:1 CBD to THC only comes as a tincture because Red Dirt Labs is using CBD isolate to create it.

“We haven’t done it in a vape cart just mainly because we were using CBD isolate first, which is in a powder form. And that much in a cart just doesn’t really work,” Gragg said. “We’re going to start working with distillate, so we may consider it. It’s not in the plans yet.”

For patients who like a low-dose method of vaping, Red Dirt Labs is launching the Transcend brand, which comes in a pod form of cartridge like a Juul.

“This is more of a low-dose, micro-dosing, hit-it-all-day kind of product,” Gragg said. “It doesn’t go higher than 35 percent, and one of the flavors is actually 15 percent. It’s not oil. This is e-juice with THC in it instead of nicotine.” 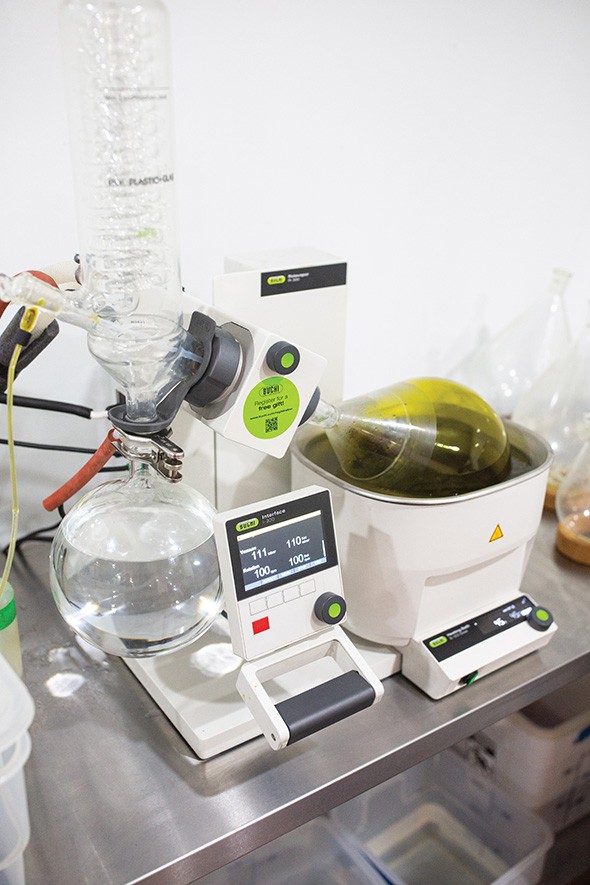 “I’m really excited about this product. Having come from the California market and seeing what THC-infused personal lubricants are available on the market, most of them are coconut oil-based, and if you know anything about how coconut interacts with latex, it’s not a good story,” Hill said. “[Higher Love] will not degrade a condom, which is extraordinarily good news.”

However, the product will degrade silicone toys.

“We can’t use it with toys, but we can use it with protection and you’ll still be fully protected,” Hill said.

“We also work with Oklahoma artists,” Gragg said. “They are helping me develop an identity for each one of our flavors. They’re all done by different Oklahoma artists, and that’s the way we’re going to try to keep that and just we just really want to be in tune with a lot of local artists here in town.”

In addition to the distillate cartridges in colorful packaging, Red Dirt Labs also does pre-rolls under the Rawhide brand.

“All our pre-rolls are hand-rolled by my cousin, Rick. We have no filters. It’s just old-school turkey leg for you,” Gragg said. “We also have a Cowboy Caviar. They have a glass tip. They’re rolled in our oil and then rolled in our kief and they make a really good smoke.”

A dry powdered sports drink in a fruit punch flavor called Fifty Seven is also in the works.

Each packet will be about 35 percent THC, so a three-packet box would provide patients with a little over 100 milligrams. Gragg anticipates that will start hitting shelves in early September.

“The absorption rate is a little bit greater just because of the nature of it being in liquid form, so it hits a little bit quicker, which is really great for edibles,” Hill said. “People really hate the waiting game.”

While the walls of Red Dirt Labs are lined with memorabilia from his past on the road with acts like Kiss and Trans-Siberian Orchestra, Gragg’s future is in cannabis. Even though he has lived the rock ’n’ roll lifestyle for decades, he is still concerned with how his home state sees the cannabis market.

“I have two teenage kids,” Gragg said. “I’m worried how this is going to affect them. They’re D.A.R.E. kids. They’ve been shown D.A.R.E. their whole life, and now their dad is a ‘potrepreneur.’ It’s confusing for them, but, you know, I think it’s worth it. Now my son is interested in chemistry because he sees that it’s actual chemistry going on here.”