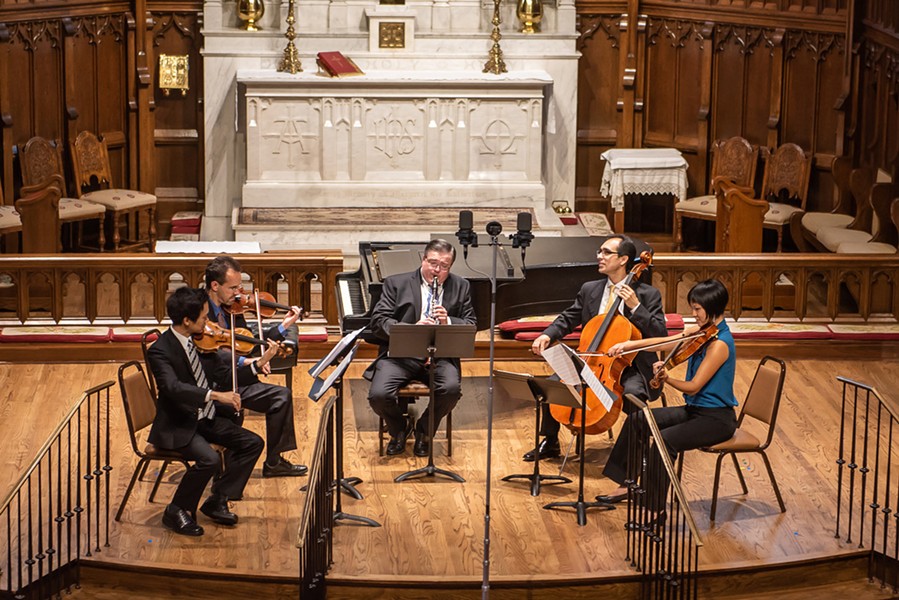 In its two previous concerts this season, Oklahoma City’s Brightmusic Chamber Ensemble paid tribute to the underappreciated viola and gave listeners a tour of Beethoven’s Vienna. For its third concert of the season and first of 2019, Brightmusic is highlighting the piano in two technically demanding works imported from Russia, Sergei Rachmaninoff’s Sonata for Cello and Piano in G Minor, op. 19 and Sergei Taneyev’s Quintet for Piano and Strings in G Minor, op. 30.

“When you think about piano,” said Brightmusic co-artistic director and pianist Amy I-Lin Cheng, “the Russian School has made a tremendous contribution to Romantic and post-Romantic repertoire. … The piano in both the second concerto and the sonata feature long, beautiful, melodic phrases. They also feature very challenging piano techniques, basically passage work with lots of fast, cascading note, wide arpeggiation, especially for the left hand.”

The concert, titled Russian Romantics, is scheduled to begin 7:30 p.m. Jan. 15 at St. Paul’s Cathedral, 127 NW Seventh St. Taneyev’s quintet, which concludes the concert, was the first piece the ensemble chose. The quintet, possibly because of the challenges it presents to musicians, is “very, very underperformed,” Cheng said.

“[Taneyev] is not well known outside of his own country,” Cheng said. “Part of the reason the Taneyev quintet may not be as popular is simply because the scale of the composition is nearly symphonic. The composition performance time is over 45 minutes long. This is a piece as passionate and as rich as you could wish from a piano quintet.”

In addition to its length, Taneyev’s quintet — featuring two violins, a viola, a cello and a piano — is challenging because of the composer’s advanced technical capabilities.

“Taneyev’s music is very imaginative, and there are quick changing tempos, you have to be able to move together as a group, and also because it is late-romantic, there is a lot of chromaticism, a lot of key changes that sneak up on you,” Cheng said. “Since he’s writing in this large symphonic scale, there are interlocking parts that are really rich in arpeggiation but they don’t always line up easily because he puts in a lot of imaginative inner voices and fancy auxiliary notes.”

Though the ensemble wants to introduce listeners to compositions they might not be familiar with and always seeks challenges when selecting material, Cheng said Taneyev’s quintet was primarily chosen for its quality.

“It’s not often performed because it’s challenging and very long, but we mainly wanted to program it because it’s just a gorgeous piece that deserves to be performed,” Cheng said. “One of Brightmusic’s missions is to promote chamber music, and we offer a repertoire that is well known pieces as well as pieces that are less performed but deserve to be performed. Everything is difficult, so I wouldn’t say we were programming this because it’s difficult. We think the inherent value and content of this music will be absolutely satisfying to our audience to listen to.”

Completed in 1911, just four years before the composer’s death, the quintet is one of Taneyev’s most mature compositions. Cobbett’s Cyclopedic Survey of Chamber Music calls the quintet “the crowning glory of Taneyev’s chamber works with piano, a work permeated with profound thought and inward pathos.” Listeners without encyclopedic knowledge of music history and theory will still be able to appreciate the magnificence of the music, Cheng said, especially as the climax approaches.

“The last movement, you can literally hear the bells and the pedals just ringing,” Cheng said. “It’s fanciful. It’s really, truly a journey on an epic level.”

The concert will open with a significantly better-known work, Rachmaninoff’s Sonata for Cello and Piano in G Minor, completed in 1901 at a turning point in the composer’s life and career.

“At the time of the composition,” Cheng said, “he had just come out of a deep depression. His first symphony received heavy criticism, and he perceived it as a total failure and was unable to compose for a long time. He sought hypnotic treatment and was able come out of the depression and compose one of the most glorious and successful piano concertos, Piano Concerto No. 2 in C Minor, the same year before he composed this sonata for cello. So he was in an upward swing again when he composed this sonata for piano and cello. However, initially, his sonata was overshadowed by the earlier concerto, but the sonata quickly caught on.”

Rachmaninoff, who studied under Taneyev, was famously a piano virtuoso, and while his skills are evident in the sonata, Cheng said the cello part is equally impressive and integral to the composition.

“There are not cello sonatas that have this kind of lyricism,” Cheng said. “This really is a gem for cellists. It is very easy for me as a pianist to want to talk about how great a piano part is, but I have to highlight the amazing lyrical writing for the cello. Without it, there wouldn’t be this sonata. The effects that he uses in the second movement, some staccato and quick fragments, melodic motifs, also showcase … the warmth the cello is capable of.”

“Many creative artists, performers, composers, visual artists suffer depression and various forms of mental illness,” Cheng said. “Artists don’t always project their personal struggle onto their music. The sonata is so warm and so much a celebration of life. If you listen to the last movement, it’s unbelievable, it’s noble and proud and bright. … The key is in G minor — both pieces are in G minor — and usually when a composer chooses a minor key, it’s to be deeply expressive. Both pieces end in major keys, so it’s rather uplifting at the end. One could, of course, read into this that, after all, life triumphs over tragedy.”

However, both works seem to express more than one mood, offering a more complete picture of the human experience.

“There is definitely plenty of emotional turmoil,” Cheng said. “What this kind of symphonic-scale piece will capture is a universe of emotions, making both pieces like journeys through life. Now one thing that Rachmaninoff captured extremely well is a sense of nostalgia. So I think it’s a fantastic work. It’s not just melancholy or sadness but the sense of nostalgia, the state of wishing, longing for the past. We can’t say if that’s directly connected to his depression or just his natural human makeup.”