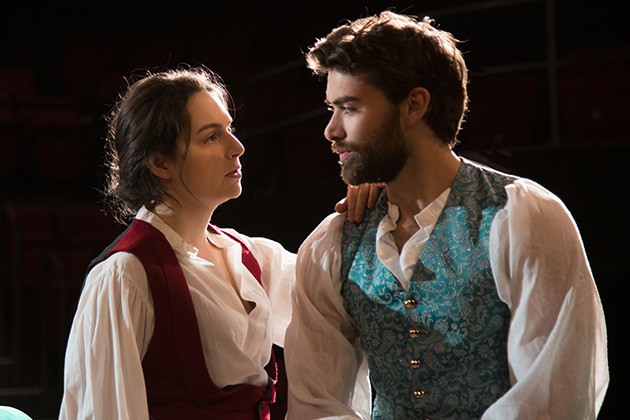 Twelfth Night, or What You Will

William Shakespeare, scholars estimate, wrote Twelfth Night, or What You Will between 1601 and 1602. Drama students at University of Oklahoma will soon help him finish it.

“A play as written on the page is not a finished product,” said associate performance professor Alissa Mortimer, who serves as director for the university’s upcoming production, “because whatever time period you’re living in and whatever company that brings the play to life has to find their own sensibility about the material anyway, whether it’s Shakespeare, whether it’s been around 500 years, whether it was just written last year. And so I think we just enjoyed being able to bring out the possible other layers that may or may not have been intended originally but seem like they spring easily from the text and can add additional layers to the story without distracting from its original intention.”

The university’s production of Twelfth Night runs April 26-May 4 at Weitzenhoffer Theatre, 563 Elm Ave., in Norman. Some of the possible layers suggested in Shakespeare’s romantic comedy seem strikingly modern. Shipwrecked in a strange land, the play’s protagonist Viola decides to disguise herself as a man, setting off a series of misunderstandings and creating confused love triangles for male and female characters.

“I think there are several elements that people relate to,” Mortimer said. “It is about unrequited love and the sort of foibles in the way humans handle love, and I think that’s pretty relatable, even to a modern audience. I think the idea of pining for someone that you can’t have for variety of reasons is relatable. The idea of how fickle people can be about love, that their passions go one direction for a while and then turn and go another direction, in this play often to comic effect, is something that I think audiences enjoy.”

Thinking that her twin brother Sebastian was killed in the shipwreck, Viola attempts to navigate the unfamiliar territory of Illyria disguised as a young man named Cesario. Orsino, the duke of Illyria, enlists Cesario/Viola to romance Olivia on the duke’s behalf, but Olivia falls in love with Cesario instead. Mortimer said Viola is one of her favorite characters in Shakespeare. The director considered several factors when she cast junior performance major Alexis Pudvan in the role.

“Viola has a lot of heart,” Mortimer said. “She’s very smart, and she’s very quick. I think people enjoy watching her, especially in disguise. … I felt like I needed an actor who was witty and quick and also balanced that out by having a lot of emotional availability, so I needed an actress who could who could access emotional vulnerability as well as sharp wit.”

While unsuccessfully romancing Olivia for the duke, Viola falls in love with Orsino. If that sounds confusing, consider that the all-male acting companies that would have been performing the play when it was written added a further level of obfuscation.

“In Shakespeare’s day, you would have had a boy playing a female role that’s dressing up like a boy, so the layers of complication are pretty fun,” Mortimer said.

In the present day, Olivia’s attraction to Viola disguised as Cesario and Viola’s relationship with the duke — as well as the close friendship between Viola’s brother Sebastian and Antonio, the sea captain who rescues him —  can suggest other layers, as well.

“I have several students who are non-binary or gender-fluid, and I think they’re interested in the exploration,” Mortimer said. “I think there’s also the possibility of same-sex romance in the play that is implied, or at least a modern audience hears the implication, whether it was originally intended or not, between Sebastian and Antonio. And so that’s generated some interesting conversation with the actors. … There are two theories about these kinds of characters in Shakespeare where you have two, in this case, male characters expressing what sounds like passionate love for each other. One of the theories is that in Elizabethan times and earlier, male, platonic friendship was actually prized as the highest and perhaps the purest form of love, and so some scholars argue that there wasn’t meant to be a sexual connotation to that love. But when Antonio says, ‘But come what may, I do adore thee so,’ that sounds to a modern audience like romantic love or sexual love. Some people think that perhaps that was a nod or a wink towards same-sex romance, and some people do not. That’s up for debate.”

“The layers of complication are pretty fun.” — Alissa Mortimer tweet this

For this production, Mortimer said she and the students decided to play these scenes with a romantic subtext.

“We did, I think, essentially decide that same sex-romance exists,” Mortimer said. “It exists, and it’s a topic that people talk about and deal with in modern society and in our own departments, and so we incorporated that possibility into our production.”

While Mortimer has long admired Twelfth Night and taught it in classes, this production is the first time she has staged the play, and she said she is even more impressed with it now.

“I find that it is structurally even better than I thought it was,” Mortimer said, “that the balancing of the romantic story that we’re meant to maybe feel some poigniancy about and the silliness of the clowns ... that the balance between those two forces is really beautiful in the script. And I didn’t realize how perfect that balance might be until I started rehearsing.”

Searching for their own balance between the play’s dramatic and comedic elements led Mortimer and the students in her cast and crew to discover the fantastic possibilities in its setting.

“Illyria, the land that Viola shipwrecks on, is a bit of a mystery even on the page, in terms of where it’s meant to be and how realistic it’s meant to be,” Mortimer said, “and so we got interested in the idea of the shipwreck, which starts the play, and interested in all of the water imagery, which is explored throughout the play. So we are staging it in a way that might appear to be post-shipwreck in a sort of magical place that might appear a little bit exaggerated or heightened, almost as though it could be a dream that came out of a shipwreck as much as a real place. … There’s a little bit of a fantasy element to it, which can heighten the comedy, I think. Perhaps when you’re speaking in heightened Elizabethan language, you’re speaking in iambic pentameter, people don’t expect for you to have pool toys or a martini glass. So there’s a contrast between people’s preconceived ideas about what Shakespeare looks like and sounds like and then what they might see in front of them.”