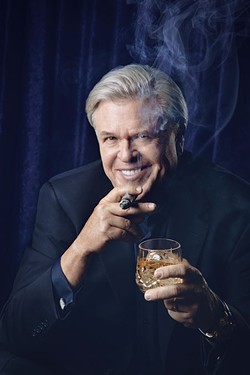 Even when he’s not on the road, Ron White still performs standup comedy. At his home base in Los Angeles, a long way from the small Texas Panhandle town where he was born, White will hit three comedy clubs in a night, working out new material until it’s ready for prime time.

“A lot of comics, when they get wealthy, they’ll stop focusing on the craft and move to Montecito,” said White, who starts his new year with a Sunday performance at WinStar World Casino and Resort in Thackerville. “But it’s like blowing a horn — you have to blow it.”

That drive did not come naturally. He was born in Fritch, Texas, a town that White said had about 700 residents at the time and not a lot to keep them there. White became a standup superstar after joining the Blue Collar Comedy Tour with Jeff Foxworthy, Bill Engvall and Larry the Cable Guy.

“It was a dirt town. And it was made of dirt. The streets were dirt, the people were dirt, and it was a borehole,” he said. “And it was forsaken by God himself — God took time out of his busy schedule to forsake this little town. And he forsook the shit out of it.”

But in that place with so little to show for itself, White found inspiration in his family, who went to the Southern Baptist church where his uncle preached. He learned his pace and sense of verbal rhythm from his uncle and combined it with his mother’s raw sense of humor. He said that his reliance on humor helped him get through the stress when his family moved from Fritch to Deer Park, Texas, a refinery town near the Houston Ship Channel that White said was “like Pasadena, Texas, without all the glitz.”

Rather than finish high school, White enlisted in the U.S. Navy in the early 1970s and served on a rescue and salvage ship toward the end of the Vietnam War and then spent part of his 20s living in Mexico before returning to Texas and working in sales.

But then he decided to put his comedy instincts to use at age 29, when he worked up four decent minutes of material and took the stage at the Funny Bone Sept. 17, 1986, in Arlington, Texas. On that first day of his comedy career, the headliner, Jeff Foxworthy, shared some solid advice: Put your punchlines at the end of the jokes.

“At first, I didn’t know what was making them laugh,” he said. “When you start out, you’re like a baby. I had this sweatshirt that said, ‘Bob’s Burger Gym’ on it, and wore it on stage for months — I mean months. Other comics were making fun of me, but I wasn’t sure it wasn’t that sweatshirt that was making them laugh, so I was afraid to take it off. Finally, some other comic said, ‘Ron, you don’t need that.’”

What he did need were props — or at least something to do with his hands. For years, his stage props included a beer and a cigarette. Then, when it was time to stop smoking cancer sticks, he used the $70 a month he saved from quitting to take up expensive cigars, which are now out of the picture since his 2013 marriage to singer Margo Rey, a cancer survivor who opens for him on tour.

“Then I worked with this guy who was a hypnotist — he was the first hypnotist-comedian guy ever, and he had more money than any of us — he made $6,500 a week, which was unheard of,” White said. “He told me, ‘Always be the best-dressed person in the room.’ I took that to heart, because dressing any other way didn’t help me.”

By the time Foxworthy started the Blue Collar Comedy Tour in 2000, White’s sartorial image was of a well-dressed man with an ever-present scotch on the rocks delivering seemingly social commentary and sex jokes with off-the-cuff casualness. His success and popularity took him beyond the original Blue Collar audience. After receiving good reviews for supporting roles in Horrible Bosses and Jayne Mansfield’s Car, White won the role of Phil, the best roadie in the business, in Cameron Crowe’s Roadies series for Showtime. While White said Crowe is pushing him for an Emmy nomination, the series did not survive its first season after what White called unfair reviews.

“It made me so vengeful,” he said. “I wanted to go to this lady who worked at Variety magazine and throw a bottle of ink in her face — I was trying to think of something I could do where I wouldn’t go to jail for more than a night or two.”

The Roadies gig made White a hot property, except he has not liked any of the offers so far. For now, he will keep hitting the Los Angeles comedy clubs every night, working up new material for his next swing through the theaters.

“The only thing I’ll say is I’ll do standup until nobody cares,” he said.