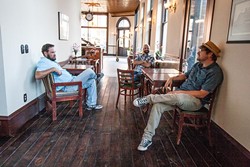 Though Joel T. Mosman can be seen nights and weekends playing music and attending shows in Oklahoma’s larger urban areas, during the day, he makes his living driving a tractor-trailer across rural Oklahoma, delivering feed to various agricultural outposts in the state.

Mosman, vocalist and guitarist for roots rock band Oklahoma Uprising and second place winner in the 2017 Woody Guthrie Songwriting Contest, sees a divide between the two types of settings. He believes art and local culture are key to bridging the gap between them.

“I see the best in both worlds, and I can identify the common denominators,” Mosman said. “The guys in my band are the same way. We’re seeing this and we’re like, ‘This is the answer.’”

The event begins 7 p.m. Aug. 5 at The State Theatre, 1961 Church Ave., in Harrah. Advance tickets can be purchased for $6 online at ticketstorm.com. Admission is $8 at the door. Popcorn Fharmacy will provide free gourmet popcorn.

The films to be shown include 2017’s Writer(s), directed by Dominique McCollum and Arvin Sepehr, which chronicles a man’s battle against writer’s block; ’17 science fiction short The Briefcase, directed by Sam Staudt; the hilarious ’15 Charlie’s Angels spoof The Bra’d Squad, directed by Patrick Kirk; and ’16’s adventure-comedy Nothing Depends On This (or Venus in Transit), directed by Aaron Souders and Stephen Tyler of the WAFTI Show podcast and featuring several recognizable landmarks around Oklahoma City.

The screenings will be interspersed with live performances by Oklahoma Uprising. Some of the films contain strong language, but admission is open to all ages.

Mosman said he wants the show to be something that gets attendees excited about the art and music being made in their own state. He said much of what is being created in Oklahoma passes under most people’s radar. Mosman is attempting to change that.

“A live show or concert experience can be about more than just music or a band,” he said. “It can be about Oklahoma culture and celebrating that.”

Mosman has been performing music in Oklahoma since 2007, but he started Oklahoma Uprising last year as a way to make music with a purpose that served more than his own ego. The band’s name goes along with its mission: to raise the state up by promoting the culture and art found within it.

Mosman said it is also the first time he specifically has ever organized anything like this. He found most of the films being screened by searching video site Vimeo.

Most of the participating filmmakers, Mosman said, were very enthusiastic about the project and helpful about facilitating the screenings.

“I’ve learned a lot,” he said, “and I think the next time we do it, I’ll try to get some more people onboard.”

Mosman wanted to hold Songs & Short Films at The State Theatre for a number of reasons.

For one, he has a love for performing and seeing shows in older theaters. He remembers playing with Oklahoma Uprising at a show in the freshly renovated Burford Theater in Arkansas City, Kansas.

“It’s gorgeous with beautiful architecture and stained glass on the ceiling with a beautiful stage and everything,” he said. “We played there, and I was just like, ‘Man, I could just go all theater gigs from now on.’”

Hosting the event at a theater also seemed like the best and most appropriate place to merge music and film. Travis Hodge, another one of the event’s sponsors, runs sound for The State Theatre.

Another facet is the opportunity to spread the cultural wealth. A lot of cool events happen in Oklahoma City and some of the state’s larger urban areas. Areas like Harrah do not see quite as many unique, art-focused offerings.

“You hear a lot of people saying, ‘Oh, there’s nothing to do in Oklahoma’ or ‘Oklahoma is lame,’” Mosman said. “But they don’t realize all these cool things that are going on in Oklahoma City and Tulsa.”

The songwriter feels passionate about promoting local culture because of all the negative news headlines the state seems to be associated with. Mosman said Oklahoma seems polarized — split between urban and rural, rich and poor, Democrat and Republican.

Culture, he said, can be a useful tool in mending that divide.

“Music is the universal language,” he said. “It’s what joins everybody together.”

Art and entertainment bring people together. When people interact with each other, they are forced to confront their differences and, in some cases, tear down walls of separation. Mosman said he hopes events like Songs & Short Films will help people find they have more in common with each other than they would have previously guessed.

“That’s when we’re able to overcome these things and grow as a state,” he said.

Songs & Short Films: An Evening of Oklahoma Film and Music