Running a restaurant is hard enough these days. Being hidden away in a golf club just makes it harder.

Executive chef Arlen Buff took over the menu at The Trellis Bar and Grill at Rose Creek Golf Club, 17031 N. May Ave., about six years after it opened. There was a problem.

“The members weren’t eating here,” he said. “They might get a burger or a club sandwich, but that was it.”

Trained at the Le Cordon Bleu campus in Pasadena, California, in 2006, Buff worked his way across the U.S. in restaurants in Los Angeles, Houston, Hawaii and, most recently, at the Lake of the Ozarks in Missouri. At The Trellis, he immediately recognized two hurdles he had to overcome.

First, the people at the club weren’t interested in the menu. Second, he needed people from outside Rose Creek to eat there to make it work.

“People assume, tucked away on a private golf course, that we’re a private restaurant,” he said. “We’re open to everyone.”

Even if you’re not sure what a sand trap is, you can still get a sandwich at The Trellis. And that’s where Buff made the other big change: the menu.

“We revamped everything,” he said. “It’s a rustic American menu. I like to take things you’re comfortable with and put a little twist on it.”

Buff added the pork lover sandwich ($9) to the lineup and has seen customers step outside their comfort zones to try a fried pork loin covered in jalapeño gravy and candied bacon.

The same goes for the mac and cheese burger ($11), which combines grass-fed beef with a spicy pepper jack and jalapeño macaroni and cheese.

“Going fresh is the key. That was my first change,” he said. “We make the dressings now. We make the soups. We use local produce when possible by getting to know local farmers and butchers.”

Little touches and new techniques are bringing a fairly staid menu “to the next level.” Things like compound butters might be old-school, but they work.

“I look for someone who has a passion for food but needs to be taught,” he said. “Everything else can be learned, but you can’t teach a love for food.”

New menu items go through rigorous testing and tasting so Buff can break down textures and flavors for cooks and show them how he got to the end product. Then they work the station together until the cook has it down pat. 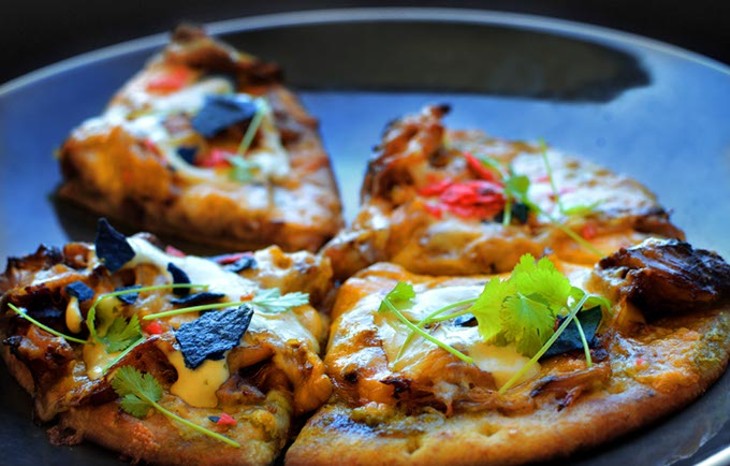 Buff is still learning, too. Catering to the tastes of members and just understanding what the Oklahoma City market craves takes work, but he has created a menu he thinks will appeal to a much broader audience.

“I want people to have fun when they eat,” he said. “I like strong flavors that encourage people to eat. We eat too much of our lives not to do it right.”

Print headline: Hidden gem, Golf might be members-only, but The Trellis Bar and Grill at Rose Creek serves everyone.