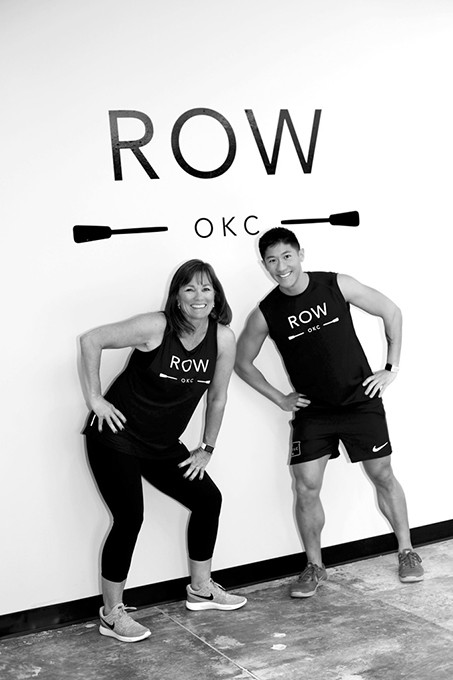 If necessity is the mother of invention, then ROW OKC is its personal trainer. The recently opened fitness center, 9652 N. May Ave., arose out of necessity and a passion for fitness.

“I started rowing and fell in love with it,” Olsen said. “I get a better workout from rowing than I ever have from running.”

After the closure of Urban Row, a local rowing studio where Olsen and her business partner Michael Luk were both instructors in late 2017, Olsen told Luk he should open his own studio, and he replied that they should open one together.

“As soon as she said that, in my mind, it was a possibility. I was already thinking about what our logo would look like,” Luk said.

He and Olsen began the search for a space and then moved on to renovations.

“We both said that this is the hardest thing we’ve ever done,” Olsen said. “We just pushed through and did it.”

About three months later, ROW OKC opened its doors in February. The studio has 13 rowers — the machines used for workouts — and includes a changing room so attendees can come before or after work, Olsen said. ROW OKC also offers a variety of classes and membership packages in order to meet various fitness needs.

Classes range from the 45-minute Intro ROW (a form-focused class for beginners) Signature ROW (the flagship class) and Turbo ROW (a high-intensity interval training class). Hour-long classes include the ROW & Flow and the 10K ROW, which lasts until all attendees reach the 10,000-meter goal. Some classes incorporate yoga or weight training.

In addition to formal classes, ROW OKC also offers open hours for those who can’t make a particular class.

“You still want to get your workout in, and if you love it and are passionate about it, we want to have it available,” Olsen said.

The first class at ROW OKC is free. Subsequent packages include limited ($24 for three rows) and unlimited trials ($29 for two weeks), and various monthly packages, including $50 for four classes/month and unlimited open hours, or the monthly unlimited package at $119/month, which also includes discounts on merchandise and a monthly guest pass. Row classes are also available to purchase in one, five, 10, 20 and 50-pack increments.

“It’s very adaptable to where you are,” Olsen said of ROW OKC’s options.

Adaptability and inclusivity make rowing accessible to a variety of ages and body types, Olsen said. ROW OKC aims to eliminate the intimidation that can come with joining a new gym, as well.

Luk said his fitness journey began after he graduated from college and thought he might apply for United States Marine Corps Officer Candidate School. In order to prepare for the physical component, Luk began working out. He took up yoga, becoming certified to teach, and then he started running and completed a half-marathon.

Despite this variety, Luk said he was still looking for something else. A coupon led him to a rowing class.

“I loved it. It helped me to balance out my running — I had one leg that was dominant over the other, and it helped me with my times,” Luk said.

He also said that rowing exercises about 84 percent of muscle groups.

Olsen said that while many might think rowing is just about the arms, it provides a total-body workout.

“The three major parts of your body are your legs, your torso and your arms, so you’re working your back and your core; they balance each other out,” Luk said. “You’re really building strength through your legs. … There’s no way to change the resistance in the middle of the class without adding water. You’re doing it through the strength of your body.”

The total-body workout appeals to many as a primary source of fitness or in conjunction with other workouts, Luk and Olsen said.

“Some people do it in tandem with things,” Luk said. “If you can row for 45 minutes, you can run for 45 minutes. You’re still building that endurance and you’re working those muscles.”

From a runner’s perspective, Olsen said that rowing offers a condensed way to achieve many of the purposes of running — such as sprinting, interval training, hills and endurance training.

“You can do all that on a rower and you get the benefit. You can do the whole thing in 45 minutes,” Olsen said.

As the only rowing studio in Oklahoma, ROW OKC has clients who come from Norman, El Reno, Newcastle, Choctaw and Edmond.

A main obstacle to rowing is just misperception, Luk said. Some people think that it is on the water with physical oars, while some might have a hard time visualizing the workout.

“We’re getting people introduced to it, and we’re getting the word out,” Luk said. “Fitness is a growing movement in Oklahoma City. … We want to do it right and do it well.”