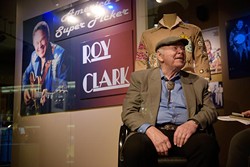 The longtime Oklahoma resident and country music icon helped launch the exhibit last week with a Thursday concert and reception at the venue.

The exhibit, on display now at the museum, 9 E. Sheridan Ave., features several banjos, photographs and other artifacts from his personal collection. Visitors can also watch an exclusive interview between Clark and museum executive director Johnny Baier.

“I’ve been given so many accolades,” Clark said during a press conference at Thursday’s event. “I don’t want to say I don’t deserve them, but then there’s some other things I didn’t deserve either.”

The musician — whose playing repertoire includes the harmonica, guitar, banjo, mandolin and plenty of other pluckable instruments — was born in 1933 near Washington, D.C., but in 1976 settled in Tulsa for good. In the 1960s, he played guitar in Maud native Wanda Jackson’s rockabilly band the Party Timers.

Clark said the first instrument he learned to play was his dad’s four-string banjo. From there, he moved on to guitar and the realization that there was a whole world of pluckable instruments out there for him to play. His stringed instrument collection now numbers in the hundreds.

Clark plays his role as on-air personality as well as he does any stringed instrument. His first TV appearance was at age 14, playing guitar on the now-defunct DuMont Television Network.

“I was watching The Tonight Show one night, and Bob Hope was on,” Clark said. “He was talking about how long he’d been on television. I forget what it was, but when he said it was 40 years or something, I said, ‘I’ve been on television longer than Bob Hope!’”

Clark also made guest appearances on popular shows like The Drew Carey Show, The Muppet Show and The Odd Couple and had an occasionally recurring role as Cousin Roy on The Beverly Hillbillies, for which he once wore a dress to portray his own mother.

“The pantyhose, they wouldn’t fit,” he reminisced. “Wardrobe was back there, pulling and tugging, and finally had to go out and cut the feet off so they could just pull them all the way up. Then the boots covered up the part without anything.”

Clark made his mark overseas as well. In the 1970s, he became the first country music artist to perform behind the Iron Curtain as he toured the Soviet Union. Clark said the banjo was semi-familiar to his foreign audience. The instrument was played in a way that resembled Russian balalaika.

“They loved [the banjo],” he said. “Anything American or West — American jazz or American country music. They put everything into general categories. If it was real, they loved it.”

Part of Clark’s allure is his role an ambassador for country and Americana music. There is no telling how many musicians across the globe were first exposed to banjo or guitar through one of Clark’s many television appearances, album releases or live performances.

“Some of these young English and European pickers and singers credit me with inspiring them to want to learn,” he said. “It’s a nice feeling.”

In September, the country music legend also will be inducted into the American Banjo Museum Hall of Fame, which is located at the museum and features more than 70 inductees, including Martin, Pete Seeger, Earl Scruggs, the Walt Disney company and Mel Bay.

The exhibit and hall of fame honor are just the latest in a long line of achievements by the accomplished and versatile picker and singer. Clark is widely recognized for his role as a host on the long-lived syndicated variety program Hee Haw and as an occasional guest host for Johnny Carson on The Tonight Show.

Clark is a member of the Grand Ole Opry and a Country Music Hall of Fame inductee. He has earned many significant awards, including Entertainer of the Year by the Academy of Country Music (ACM), ACM’s Comedy Act of the Year and a Grammy Award for his version of “Alabama Jubilee.”

The exhibit runs through March 2018.