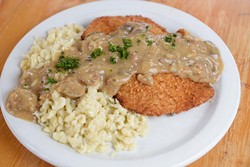 Germany is known for a great many things: well-made automobiles, diverse musical acts like Rammstein, Scorpions and Kraftwerk and, of course, Oktoberfest.

Just about every local bar pours Oktoberfest beer for thirsty customers thanks to King Ludwig I of Bavaria, hereafter referred to as The Party King.

Back when he was just Crown Prince Ludwig, The Party King married Princess Therese of Saxe-Hildburghausen in October 1810. The following celebration was an epic rager that lasted several days. The Bavarian people liked it so much, they kept doing it every year, even after a revolution made Bavaria part of Germany.

It’s hard to top a party so awesome it becomes a quasi-international holiday, but even if you aren’t The Party King, you can be pampered like one at Royal Bavaria, 3401 S. Sooner Road, in Moore.

Started by Jörg Kühne in 1992, it is now owned by original head chef and Munich native Andreas Gmeiner, but the food is classic Bavarian all the way. Do not go to Royal Bavaria looking for diet food. Of the four salads on the menu, only one doesn’t include meat.

A good start to any meal, or just a good snack while enjoying Royal Bavaria’s housemade beers, is the Oktoberfest Brez’n Plate ($9.59).

Getting pretzels at a restaurant can be a dicey proposition, but this is a sure thing. The freshly baked pretzel is enormous and comes with a trio of delicious dips and spreads. The Bavarian cheese spread has a buttery, almost Brie-like flavor, while the German mustard is spicy and stout. Some diners might be torn on the homemade pâté, which has a pinkish hue, but I thought the meaty paste was a savory delight.

A word about this oft-maligned condiment: Sauerkraut is fermented cabbage. If the only sauerkraut you’ve had came from a hot dog cart, then the word alone is likely wince-inducing. Please give it another try. Taste the locally made stuff and discover a flavor as deep as the Mariana Trench, if it was made of cabbage.

Despite the name, wienerschnitzel is not a kind of hot dog. Rather, it’s a meal that should make Oklahomans feel right at home. A big piece of pork loin is pounded thin, rendering the meat extremely tender, and then it’s covered in buttery bread crumbs and fried to a color so golden it belongs in the Federal Reserve.

Schnitzel is kind of Germany’s answer to the chicken-fried steak, and like Oklahoma’s beloved meal, it’s best served with gravy.

Served with homemade German noodles called spätzle, the dish is almost reminiscent of the classic red sauce Italian favorite chicken Parmesan. The crunch of fried breadcrumbs is softened by gravy, which adds a different kind of richness to the flavor. The earthy taste of the mushrooms is mellowed by fat-cooked flour and cream that brings the gravy together. The noodles make for a great side dish, or one can cut up the schnitzel, mix it evenly and enjoy it as a hearty mélange of meat, carbs and butter. 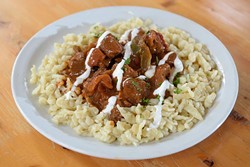 For a similar dish with a little more bite, Paprika Schnitzel mit Pommes Frites ($18.99) is a fabulous choice. The breaded pork loin is the same, but hunter’s gravy is replaced by a paprika-spiced bell pepper and onion sauce, and French fries are substituted for spätzle.

While hunter’s gravy is kind of decadent, the piquant onion-pepper sauce offers a bit of sizzle. Paired with the buttery schnitzel crust, it creates a lovely balance.

Monday-Wednesday, Royal Bavaria makes multiple schnitzels even more enticing with a two-for-one deal that ought to pack the place out.

Those on a budget might also enjoy the weekly Thursday night buffet. It’s an easy way for diners to try several German favorites without ordering full entrees. It’s $7 for children ages 3-12 and $17 for diners age 13 and older. Reservations aren’t required, but it is pretty popular, so if having a table ready when you get there is important, call ahead.

While the flavor of Gekochte Ochsenbrust mit Rosenkohl, Bratkartoffeln und Meerrettichsauce ($18.29) was good, the texture of the dish — sliced beef brisket served with a sour cream horseradish sauce, Brussels sprouts and home fries — wasn’t a favorite.

Brussels sprouts were tender with a buttery flavor, the horseradish sauce was perfectly balanced and the sharp bite of horseradish quickly gave way to cooling sour cream, but the brisket wasn’t very beefy and the texture was a little tougher than I prefer. That said, the home fries were tender and perfectly seasoned, walking the edge of being too salty without ever crossing the line.

If beef is a must, Royal Bavaria serves a few different kinds of steak with a variety of sauces. Don’t overlook Kessel-Gulasch mit Spätzle ($15.99).

A rich stew containing tender chunks of beef, a growing warmth from paprika and a blend of tomatoes, onions and bell peppers, gulasch is a cold winter night dream come true. The stew comes served over spätzle and is finished with a dash of sour cream over the top. It’s a big bowl of happiness.

Royal Bavaria serves a homemade Apfelstrudl mit Vanille-Eis ($6.99) or apple strudel with vanilla ice cream. Much as a good dessert can top off a meal, it seemed a bit wan compared to the intense flavors of the rest of the banquet.

The restaurant also brews its own beer according to German purity laws, so if you enjoy a glass boot filled with German-style beer, this eatery is a must. My favorite is Kings Gold, a smooth-drinking lager beer with a sweet malty flavor.

Royal Bavaria is kind of like having Oktoberfest year-round in Moore. Grab your crowns, party kings and queens, because this place is worth the drive.

What works: Schnitzel and gulasch are meaty masterpieces.

What needs work: The brisket dish was a little tough.

Tip: The Thursday night buffet is a good way to explore the menu on a budget.