The Medieval Fair of Norman continues its time-honored tradition of free fun and learning. 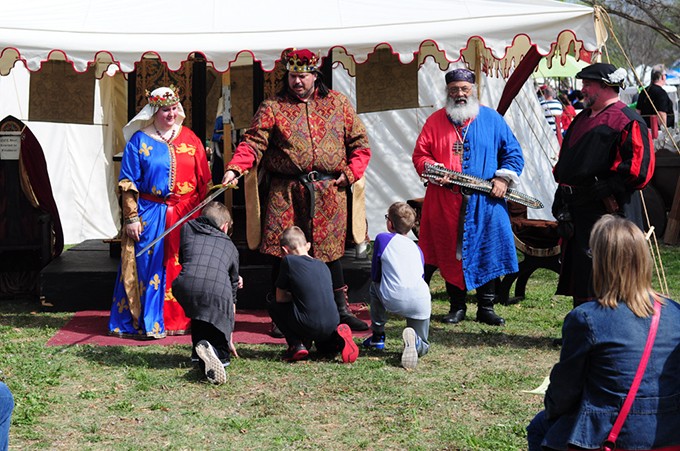 In a modern atmosphere totally saturated with technology and the internet, there is at least one annual state event showing guests that long ago, people actually survived and thrived without the assistance of smartphones and computers.

The Medieval Fair of Norman returns for its 42nd year Friday-Sunday at Reaves Park, 2501 Jenkins Ave., one block east of Sam Noble Oklahoma Museum. Through the years, the free-admission public fair has swelled into one of the state’s most cherished annual events. According to the fair’s website, The Medieval Fair is the state’s third largest annual event.

Ann Marie Eckart, who has been the fair’s coordinator for the past seven years and involved with the festival as a performer, volunteer or organizer since 1990, said everyone should be able to find something that suits their fancy over the weekend.

“No matter what your thing is in the modern world, we will have the medieval equivalent for you at the fair,” Eckart said.

Overall event attendance is hard to predict and weather-dependent, but with good conditions, Eckart said the event brings in as many as 300,000 visitors. Last year, total attendance dipped to 175,000 due to a rainy weekend.

“Most of the crowd left early Saturday evening, and Sunday was a very light crowd,” she said, “but we have people that still come out when it rains.”

There will be 40 food vendors and more than 190 artist booths on-site. And there are an onslaught of demonstrations, activities and games to keep guests entertained, including jugglers, jousters, musicians, dancers, combat, table games, blacksmiths, cooks, animals, a human-sized chessboard and more.

Performers from around the country will be dressed in historic garb. Each festival models itself after a specific year in Medieval history, with this year taking after King Edward III’s reign in 1360.

Each day begins with a royal procession as the king and his court make their way from the northeast corner of the park to the royal pavilion, gathering a crowd as they go. Once at their destination, the king greets guests and announces the day’s planned activities and welcomes them into the fair.

The fair’s cast also participates in another parade around the park at noon each day.

“Nobles love to show off their finery,” Eckart said. “And everyone loves a parade, of course.”

At the end of each day is The Last Huzzah, a showcase hosted by Black Oak Shillelagh that is essentially a medley production of the day’s performers.

Eckart said there is no reason anyone should leave The Medieval Fair unsatisfied.

“If you’re bored at fair, you’re beyond help,” she said.

The Medieval Fair is no doubt a fun time, but it is primarily an educational event. Eckart said the era is where modern Western society really started to take shape.

“This is the time when we’re switching to a money economy and the middle class is starting to exist,” she said. “It’s fascinating when you start studying and reading and learning about it.”

The Medieval Fair began in 1977 and has been held each year since. It was originally a forum for the University of Oklahoma’s English department, which held the event on the first weekend of April because it was close to William Shakespeare’s birthday.

Outside interest in the festival grew steadily over the years, and the one-day event expanded into a three-day festival in 1993. The Medieval Fair has been held in Reaves Park since 2003.

The event is a self-funded university function within OU’s campus outreach department. Admission is free, so funding comes from vendor booth fees and food and game sales.

The Medieval Fair is one of the few renaissance fairs in the country offering free admission. Eckart said the event remains free as part of its core mission, which is to spark curiosity that leads to lifelong learning through educational entertainment.

“It’s not only the patrons who are coming to see us,” she said, “but we keep our booth fees low for the artists who are participating, and our artists, as well as our performers, are coming from all over the country, including Oklahoma.”

Because the fair has remained free for so many years, it has established itself as a strong tradition among local families.

Eckart attended her first Renaissance fair as a teenager living in Kansas City, Missouri. Going into the event, she had no idea what effect it would have on the course of her life.

“I switched to a new high school, and my new friends were like, ‘Hey, come check out this new thing,’” she said. “And I got hooked.”

She began participating as a historic performer in her local fair and branched out to some other events in the region. Eckart first visited The Medieval Fair of Norman in 1986. She moved to Oklahoma four years later and entrenched herself in the event for years before becoming its full-time coordinator.

Participating as a cast member in The Medieval Fair is a more time-intensive commitment than some might guess. Cast auditions are typically held in October, with acting workshops occurring all the way up to the start of the fest in April. Eckart said this year’s cast is incredibly diverse, composed from a number of different backgrounds and religions.

“It’s amazing how they all come together as one big family,” she said.

Organizing each Medieval Fair is also a lot of work. Eckart said each fair weekend takes 18 months to fully orchestrate, with one year’s event always overlapping another.

With as much work that goes into it, Eckart said she still loves what she does. Few things lift her spirits like the sight of bright-eyed children amazed at their surroundings and adults who, for at least a moment, can escape the contemporary worries with a piece of the past.

“It’s very fun, and it’s very rewarding,” she said. “Watching people change and grow as they participate in fair is the most rewarding part for me. Seeing the patrons come out and the smiles on their faces and the looks of amazement when they’re watching a blacksmith turn a lump of metal into a fantastic piece of art is very rewarding to see.”


The Medieval Fair of Norman