Oklahoma’s statewide runoff elections on Aug. 28 revealed which candidates will be on voting ballots for the Nov. 6 general election. 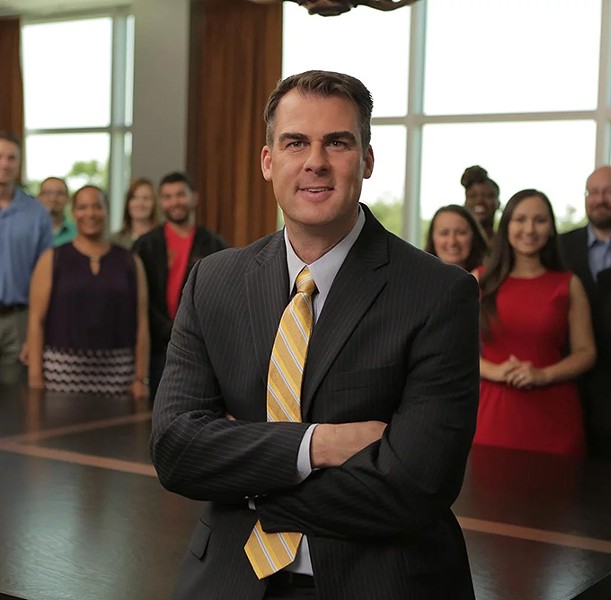 “As your next governor, my promise to you is that I’m always going to be focused on strengthening all Oklahoma families for the next generation and not the next election,” Stitt said to a crowd after his victory on Tuesday.

In November, Stitt will run against Democrat and former Oklahoma Attorney General Drew Edmondson, who won the Democratic vote in the June primary election, and Libertarian Chris Powell, who beat Rex Lawhorn by nearly 20 percent on Tuesday.

Chris Powell, a Gulf War veteran and former Oklahoma Libertarian Party chairman, made state history Tuesday night by being the first Libertarian running for Oklahoma governor to move onto the general election.

After Tuesday’s win, Powell told supporters that his campaign’s victory speaks to Oklahomans’ desire to move beyond a two-party system of governing.

“I want to move beyond empowering the traditional two parties,” Powell said. “I want to show Oklahomans that this is about empowering ourselves.”

Nonpartisan political analyst and pollster Bill Shapard with SoonerPoll said in upcoming months, Oklahomans will see election ads similar to ones that were shown during 2016’s national presidential election.

“I think what you are going to see from Kevin Stitt is to paint Drew Edmondson as the insider because [Stitt] is the ultimate outsider, having never ran for public office,” Shapard said. “I think the race for the November win is going to be a close one and an interesting one to watch.”

On Aug. 30, President Donald Trump endorsed Stitt on social media, stating, “Kevin Stitt ran a great winning campaign against a very tough opponent in Oklahoma. Kevin is a very successful businessman who will be a fantastic Governor. He is strong on Crime & Borders, the 2nd Amendment, & loves our Military & Vets. He has my complete and total Endorsement!”

Republican Mike Hunter won the bid for attorney general on Tuesday against Gentner Drummond and will face off against Democrat Mark Myles on Nov. 6.

Joy Hofmeister won the Republican ticket for superintendent of public instruction, gaining 56.7 percent of the vote.

Republican Bob Anthony won the Republican race for Corporation Commissioner. Anthony received 53.6 percent of the vote while his Republican opponent Brian Bingman received 46.4. Anthony will face off against Democrat Ashley McCray in November. McCray earned 65.1 percent of votes in the Democratic election for corporation commissioner.

Ballot Title for State Question No.  793

Ballot Title for State Question No.  794

This measure amends the provisions of the Oklahoma Constitution that guarantees certain rights for crime victims. These rights would now be protected in a manner equal to the defendant’s rights. The measure would also make changes to victim’s rights, including:

(1) expanding the court proceedings at which a victim has the right to be heard;

(2) adding a right to reasonable protection;

(3) adding a right to proceedings free from unreasonable delay;

(4) adding a right to talk with the prosecutor; and

(5) allowing victims to refuse interview requests from the defendant’s attorney without a subpoena.

The Oklahoma Constitution currently grants victims’ rights to crime victims and their family members. This measure would instead grant these rights to crime victims and those directly harmed by the crime. Victims would no longer have a constitutional right to know the defendant’s location following arrest, during prosecution, and while sentenced to confinement or probation, but would have the right to be notified of the defendant’s release or escape from custody.

Ballot Title for State Question No.  798

The measure requires the Legislature to establish procedures for the joint nomination and election of candidates for Governor and Lieutenant Governor. If passed, this new election format will be used beginning in the 2026 general election cycle.

Ballot Title for State Question No.  800

This measure would create a new fund called “The Oklahoma Vision Fund” in the Oklahoma Constitution. Money could be appropriated to the Fund. Beginning July 1, 2020, five percent (5%) of gross production taxes on both oil and gas would be deposited into the Fund. After that fiscal year, the percentage would increase by two-tenths percentage points each year. Other monies could be deposited into the Fund if provided by law. The State Treasurer would deposit four percent (4%) of the principal amount of the Fund into the State General Revenue Fund each year. The Fund would be subject to an investment standard known as the prudent investor rule. The Fund could be invested in stocks and similar securities. Not more than five percent (5%) of the monies in the Fund could be used for payment of debt obligations issued by the State of Oklahoma, state government entities or local government entities.

Ballot Title for State Question No.  801

This measure amends Section 10 of Article 10 of the Oklahoma Constitution. It expands the uses permitted for certain ad valorem taxes levied by a school district. Currently, tax revenue is placed in a building fund. The fund is changed to allow use for operations. The operations would be those deemed necessary by a school district.

Oklahoma’s General Election will take place on Tuesday, Nov. 6, 2018 with early voting taking place on Nov. 1 and 2. The deadline for voter registration is Friday, Dec. 12. To register, visit ok.gov.