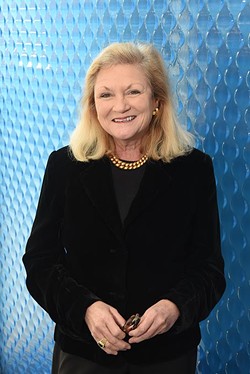 Meg Salyer is often the oldest person in the room.

That has less to do with her own age (59) and more to do with the average age of those attending many of the urban events she is a common participant in.

“I love being around young people,” Salyer said. “We all kind of gravitate to energy, and the young people in this community are bringing so much energy and excitement.”

Salyer, who seeks reelection on Tuesday, benefits from strong business ties and high-level endorsements, which her two opponents have tried to present as an example of being out of touch with the average citizen. But observing Salyer over the last few months also shows her effort to participate more with many of the neighborhood groups, community events and other organizations that have been fueled by a new and younger generation of OKC resident.

It’s nothing new for politicians to pander to millennials, especially in urban areas like Ward 6. But Salyer’s work is viewed with authenticity by her supporters.

“I think that, based on the location of her ward being one of the most attractive for the millennial generation, she recognizes the fact that millennials have a shared vision for the future of urban Oklahoma City,” said Dustin Akers, a member of the Classen Ten Penn Neighborhood Association and a Salyer supporter. “She seems to embrace those concepts, and she has really been engaging in the young professional community of Oklahoma City.”

Salyer will tell you she has always been interested in the city’s young professionals, but she admits to a shift in thinking over the past year to strengthen her connection with that generation.

“I really think in the past year, I tried a different approach; instead of trying to ask the city to find a solution, it was asking the neighborhoods to be the solution,” Salyer said. “We don’t have the staff at the city to solve everybody's problems, and we don’t have all the answers. This job is really [about] crowdsourcing ideas.”

Salyer points to A Better Classen as an example of this focus. When Jonathan Dodson approached her with the idea of improving Classen’s pedestrian and bike features, Salyer encouraged him to form a group and dream up ideas.

“I told [Jonathan] I needed him to go out and find a couple of his neighbors who are having the same problem and come up with solutions,” Salyer said. “My advice was, ‘I want you to come back to me with an idea and then let’s look at a bond issue.’”

Groups like Classen Ten Penn, the Plaza District and Midtown OKC are based in Ward 6 and much of the local focus on urban redevelopment, improved transit and placemaking are centered in the communities of the ward; including A Better Classen, which held a community meeting last month that Salyer attended.

Embracing the city’s new generation can be a smart political tactic for anyone seeking office in Ward 6, but Salyer has also turned it into a strategy for governing.

“Increased collaboration with all residents, including these young people with so much creativity, is the way I’ve decided to start looking at [being on the council],” Salyer said. “So maybe that is a change.”